I am in the office in Westwood today. Jen took the day off to hang out with Bellana, but I had to go into the office. Covid is surging, so let’s all get together. End Rant.

The last time I came here I forgot my headphones and it was borderline nightmarish. I did not forget my headphones today. Thank The Force for that one. No, today I forgot my Thursday pill caddie. I guess I am taking my lunchtime vitamins at dinner, and my dinner vitamins before bed. It’s okay. It won’t be the first time.

The real downside today was the traffic. A year ago, when we first started experimenting with coming into the office, much of the world was still locking down and there wasn’t a lot of traffic. Not so today. I got in the car at 7:30 and Waze told me I’d get to my destination at 8:50. I actually got here at 8:48, which is nice but still really crappy. There were traffic jams everywhere. My favorite one was right at the spot where I first pull onto the highway. It really set the mood for the drive.

I am in the office today. It’s the first time since before the surgery. The traffic was really bad. Another sign that the pandemic is over, even though people are still getting sick in droves. Hooray.

I was 10 miles down route 93 before I realized that I forgot my headphones. Damn it! Fortunately I had an old set of ear pods in my desk, so we’re good to go for today but… dumb ass.

It’s my first attempt at monitoring liquid and protein intake from outside of the house for a full work day. I will also be taking my meds (just vitamins, actually) at work today too. What could go wrong?

I worked on some lyrics for three of the November songs tonight. I won’t do car music tomorrow, but whenever I do it I’ll have November stuff to work on.

I had my step son’s Air Pods Max that he loaned to me on when I started and there was weirdness. I had two guitar tracks. One was panned hard left so it only plays out of the left speaker. The other is panned hard right so it only comes out of the right speaker. When I had the Air Pods Max on I was getting stereo output, meaning I had music in both ears, but the right guitar wasn’t there. I switched to wired headphones without changing any of the tracks and the right guitar was there.

Why did I put two pairs of headphones into the bag of stuff I took to my parents house for my nana sitting shift?

On the left we have a pair of AirPods Max that Harry loaned to me. They sound awesome and are great for everything I use headphones for on my computer, iPad, or iPhone… with one glaring exception.

They are bluetooth and bluetooth has one huge drawback. It is slow. Incredibly slow. The lag is ridiculous. Watching video or listening to music is fine but actually recording music… no way. Too much lag. As the track is recording you are hearing and playing as much as a full beat after where the computer is actually playing. When you listen back everything is grotesquely out of time. Bluethooth headphones are absolutely useless for recording purposes. Hence the second pair, which actually plugs in.

So when I watch a video (like the episode of The Flash I just watched… Covid protocols are doing season seven no favors), or when I mix a song (like the one I posted last night) or when I’m listening to music or a podcast, I’m using Harry’s AirPods Max. When I am recording something, like the guide track for the melodies I added to two songs earlier, or the bass and drums I added to a new song idea, I am using the cheap little Sony things that I bought at the Orlando Airport a couple of years ago.

How’s that for a fascinating blog post, huh? You learn so much when you read my brain farts. You’re welcome.

I mentioned yesterday that I was hoping to mix two songs tonight.

Every other Friday I spend the evening hanging out with my mom at my folks’ house while my dad does volunteer work. I get there around quarter to seven and leave about quarter past 10. My mother is usually asleep not long after 8:00, so I usually bring my computer and mess around with music while I wait for Dad to come home. The plan tonight was to try to mix one or both of the two songs that are ready.

This morning before I left I put my computer into my backpack (MacBook Pro, beetches). I had my awesome new blue tooth Bose headphones in their case sitting right next to the computer. I also had my awesome Sennheiser cans, the ones I used to mix last February’s RPM, and last November’s NaSoAlMo, and every thing in between, sitting right there on the desk next to the Bose headphones and the computer.

I forgot to put either pair of headphones into the backpack. I have an old pair of ear buds. Urgh. One of the songs that’s ready to mix is far and away my favorite of this month’s batch (meaning on a scale from 1-10 it’s a 3) so I will mix the other one first. I don’t want to waste the time, and I don’t want to mix a potentially decent song using ear buds.

I am an absent minded nitwit.

Check it out, my beautiful wifey surprised me with these sweet cans*! 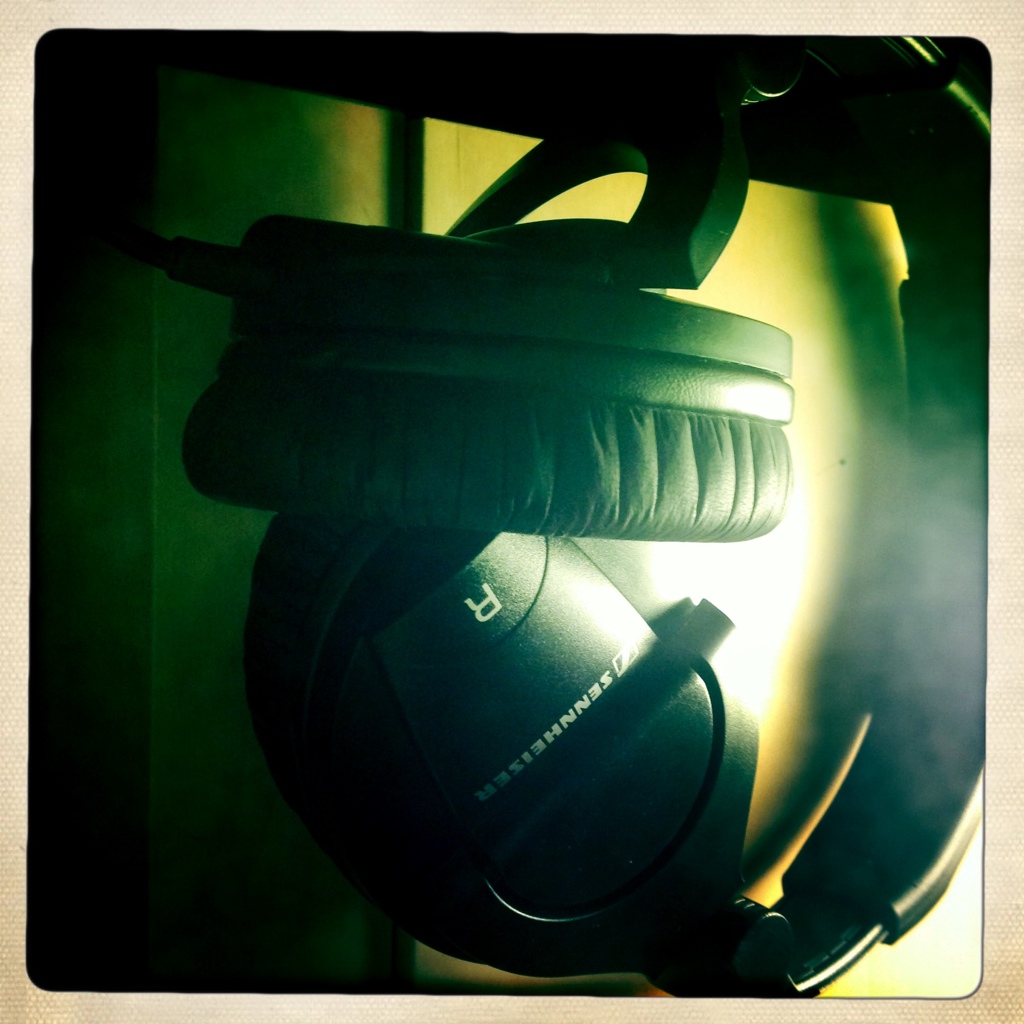 I think I might have stumbled upon one of the reasons that my home recordings sound like utter shit. One of the many, many reasons. Turns out my headphones suck like no headphones have ever sucked before.

I think it was 2003 or 2004 when I bought myself an 8-track recorder and a 16 channel board. I bought a pair of headphones from radio shack at the same time. I didn’t buy their cheapest cans, but I didn’t buy their best either. All I wanted was something better than the cheap crap that came with my portable CD player. Over the years I went through a few pairs of headphones, but I never invested in anything terribly good.

Today I was recording guitars on my iPhone and iPad so I used my radio shack cans. I didn’t think anything of it. At least not until a few minutes ago when I brought up the music app and tried to play the indie rock genius mix playlist.

Uh oh, thinks I. This sounds freakin’ terrible! 100 times worse than the Apple ear buds. What the hell?

For Christmas I got my beautiful wife a pair of Bose QC 15s. I plugged those into my iPad and low and behold! It was like listening to 90’s indie rock in heaven. I swear, Urge Overkill and The Breeders wouldn’t have sounded that good if they were in the room with me.

Yeah, definitely time for an upgrade in the headphones department. I’m not talking about getting QC 15s or anything like that, but the time for decent headphones has arrived at last.

I used to live here.
Clouds over the grocery store.
Happy international cat day.
They are like a little family. I am such a nerd.
Blurry background… on purpose. Kick ass.
A Farewell to Kings