I solemnly swear that I am up to no good… at my parents house at 1:37am.

It’s dad this time. Back pain. Bad enough to go to the ER. The going theory is kidney stones. I’m hanging out with my mother. I’m in the dining room pretending to write song lyrics. She’s in the living room watching reruns of Married with Children. It’s going on 2:00am and she’s wide awake.

I just put lead guitars onto four songs and rhythm guitars onto two. My ears are ringing a little, everything sounds like mush, and by the time I finished my fingers weren’t doing what I told them anymore. I think I’m done for today.

I did a little experiment. I had my first taste of a wet/dry rig. Go look up That Pedal Show on youtube and you’ll find a slew of videos talking about wet/dry. The basics are, you play through two amps and put all of your modulation and timing effects into just one amp. That way you can seriously overuse the effect, but the dry signal coming out of the second amp makes it so the sound doesn’t turn to complete mud. The end result is supposed to be an epically huge, spacious, 3D kind of overall effect.

What I did today was super simple. Of my two amps, only one has a built in tremolo effect. The Vox AC15 has one, but the Fender Bassbreaker 15 does not. So, I put some tremolo on (even though I really never use that effect at all) and gave myself a mini-wet dry. The wet (effected) amp being the Vox, and the dry (no effect) amp being the Fender.

It was really simple. Nothing Earth shattering… but it did sound pretty cool. I put it on a rhythm part for one song, but only for two measures or so, and a little tiny bit on a couple of lead parts. I normally pan the two amps completely separate for rhythm parts (one fully to the left and the other fully to the right) but for leads I usually keep them panned together (both straight down the middle, usually). I think the effect is greatly lessened when the two signals aren’t spread out. We’ll see if I lose it in the mix.

I also tried to use my cheap little pitch shift pedal on one solo. It’s a Donner Harmonic Square. I’m pretty sure it’s just a clone of an Electro Harmonix Pitch Fork. The downside is the printing on the pedal is so incredibly small that I can’t read it, even with my glasses on. I have to take a picture and zoom all the way in. It’s crazy, see?

I wanted to mix the dry signal with a pitch a seventh above, because Trevor Rabin, ya know? Unfortunately, the +/-7 setting actually is a +/-5. There doesn’t seem to be a seventh setting at all, even though the labeling on the pedal says there is. I went with an octave down, because for years and years I always had a DoD Octaplus pedal that was just an octave divider (it let the original signal through, but mixed in another pitch, one octave down). Sadly, that trusty old warrior of a pedal is dead now, but I can get the same effect with this cheap little thing (it actually tracks a little better than the Octaplus did… not to speak ill of the dead or anything). I was a little annoyed though… I wanted me some Owner of a Lonely Heart sounding stuff. Oh well.

So, here’s a picture of all my stuff. Hopefully I’ll get another mix done tonight. Not for a while though, my ears really feel like mush. I think I had my headphones up a tad too loud today.

I left the house today! WOOHOO! Suck it, Coronavirus!

I went to my parents house today for something that was not an emergency. What a nice feeling that was, let me tell you. They are having a bit of an issue with vines and invasive plant over growth. They are kinda taking over. I took a trusty, heavy duty hedge clipper over there and went at it. They can now get through the front door without anything pulling any Little Shop of Horror shit on them.

The downside. Thorns. I didn’t realize it. They didn’t realize it. Some of those vines had the biggest, ugliest, razor sharpiest thorns I’ve ever seen. My father chucked a pair of heavy gloves out the door for me, which helped, but I half expected my second favorite Bruins t-shirt was going to go home in rags. Luckily I avoided that.

I stayed until my back pain convinced me that it was time to go. I got to talk to my parents through the door for a few minutes. Mom had a bad day yesterday, pain wise. Today seems a little better. She’s definitely a little more together cognitively, which is great. She had blood work yesterday, and a nurse visit the day before (I think?) and a chemo treatment this coming Monday. It’s not going to get easier for a long time.

On the way home I had to do something that I hadn’t done in months. I had to put gas in the Mazda. I’ve written about it before, but I haven’t put gas in that car since early March. Five months. If there’s a plus side to lock down, it’s the huge reduction in carbon emissions coming from our family. I’ve now put gas into each car once since the lock down started.

Unfortunately, the visit to the gas station was a clear demonstration of why our country has gone to shit. There were four customers. Me, a driver on the island next to mine, and a couple on a motor cycle on the next island over. There was also a youngish guy putting air in his tires. Of the five people, there was one mask. Mine. I had latex gloves on too. The rest of the group? Nothing. My skin didn’t touch anything that isn’t a part of the bubble we live in. Inside the car? Yes. Outside the car? No. I kept waiting for some smart ass nazi-friendly remark from one of the other customers. It never came. Good. Screw them.

My Flickr photo-a-day thing is up to day 343 today. Just a few more weeks to go. I tried to take a picture out the car window while stopped at a stop light. There’s a farm on the State Hospital grounds (technically I don’t think it’s on the grounds anymore, I think the land changed hands? Something like that? It used to be State Hospital property, but who knows, whatever) and I tried to get a picture of some corn.

That was my second attempt. The first attempt also caught the control box for the traffic signal. I didn’t want that though, so I took another.

When I got home I noticed the image on the box. I thought it was a reflection of one of the State Hospital buildings, but the angle is all wrong. I zoomed in and saw it’s a painting! How cool is that? A little cropping and now this photo 343/365:

The Lizardfish pedal board is back in the game. There was modulation tonight, and now there is an August song ready to mix.

The Lizardfish pedal board is a dusty mess right now, but it’s all hooked up again and ready to go for the next 50/90 recording. Will that be later tonight? I hope so.

There should be another OCD alternative in the near future. I just have to wait for the builder to actually build it. It’s not a custom job, but it’s as close as this red head is likely to ever get.

We are a two shower household once again. 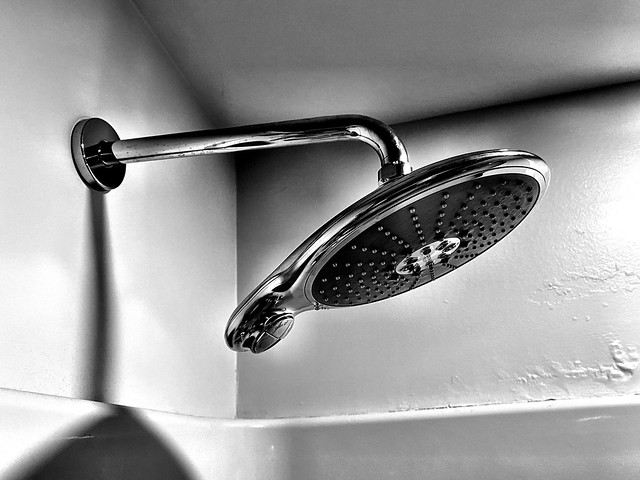 Did I ever mention that we had a shower head break? Do you care? No? That’s okay, it’s over now. All is well again.

Lots of music progress. I recorded rhythm guitars for (I think) five songs yesterday, wrote lyrics for two, and then today added vocals to five.

I’d like to add the stupid picture I took of the tree next to my car-music parking spot, but wordpress.com’s block editor is being a bit of a dick right now.

Never mind, wordpress.com wasn’t being a dick, I forgot to update a setting in Flickr. My bad.

I can practically smell how little you care.

Okay, so I mighta over done the Hipstamatic stuff today. A little. Shake to Shuffle, babie.

Was today the first time this summer that I cooked lunch on the grill? I think so.