I added another pedal to my signal chain today but I didn’t use it. I’m thinking of maybe using it for some leads. We will see.

I love fuzz pedals in general, and I seriously want to love this little Fuzzface, but when I put it side by side with a Big Muff style fuzz it just can’t compete.

The main focus of rehearsal last night was working out a set list.  Kevin came up with a rough draft.  I had one little suggestion for a change.  Greg wanted more changes but couldn’t come up with alternatives so we punted.  We ran through the list as it was with the expectation that we’ll edit it during group chats throughout the week.

I had some gear issues.  Four or five songs into the setlist I switched off my spanky new Fulltone OCD ge for a second and then switched it back on and… nothing.  Huh.  I kicked it a couple of times and it came back but started cutting in and out.  I shut it off again and left it that way.  There’s a bad cable in there somewhere.  I’ve been using the backup board at practice while I fiddle with everything on the main board at home.  I mentioned a while ago that I took the fuzz pedal off the main board, but I still have one on the backup board, a Wren and Cuff Tall Font Russian.  With the OCD off I was able to switch the Tall Font on and it was pretty stable.  Okay then, for the rest of the practice I’m using fuzz.

The volume level with the fuzz on was the same as it was with the OCD on, but as soon as the band started playing I vanished from the mix.  The Tall Font is a Big Muff clone and that’s a common issue with Big Muffs.  All of the mid range frequencies are scooped out of the fuzz pedal so there is nothing in the sound of the guitar to differentiate it from the bass guitar on the low end or the cymbals on the high end.  The work around is to just turn up the volume on the amplifier.  I turned up until I could hear myself in the mix again and all was almost well.  The problem now is how things work with the fuzz off.  If I need to play clean the guitar will cut through the mix the way it’s supposed to and the volume change will result in everyone being nuked right out of their sneakers.  The fix for that is to use the volume knob on the guitar.  It doesn’t clean up perfectly the way a Fuzz Face circuit does, but it worked well enough.  I ended up turning the neck pickup volume way down and leaving the volume up on the bridge pickup.  When I wanted clean I just switched pickups.  All problems solved.

After an hour or so we needed a bathroom break and I did some troubleshooting.  I unplugged the cable coming out of the OCD and replaced it with the cable going into the amp.  That eliminated the problem.  Did it actually fix it or did I just get lucky and putzing around put everything into a state where it wasn’t cutting out anymore?  I don’t know.  I do know I needed to turn the volume on my amp back down.  I was happy to be back to overdrive, but I was also sad to put the fuzz away again.  I do so love a nasty fuzz sound, but I’m just more into a good overdrive now.  All these options.

My playing as a whole was okay.  I felt a little weird rhythmically, as in I was rushing sometimes and dragging sometimes and just funky (not in a good way) here and there.  I was trying to keep my hands relaxed and it worked.  No finger pain, no fatigue.  My elbow started acting up again though and by the end of the night it hurt noticeably.  It actually still hurt this morning.  It’s starting to feel a little better now though.

The band sounded fine.  We were focusing on songs we haven’t played in ages so there was rust, but when we hit things that are current for us we were pretty good.  The show on Saturday is going to go well.

I have the backup board at practices but I am definitely using the main board at the gig.  When I left last night I was 100% set on using the Deluxe Reverb as my amp.  By the time I went to sleep I was starting to waffle on whether to use that amp or the Bassbreaker 18/30.  I think I’m starting to lean toward the Bassbreaker. 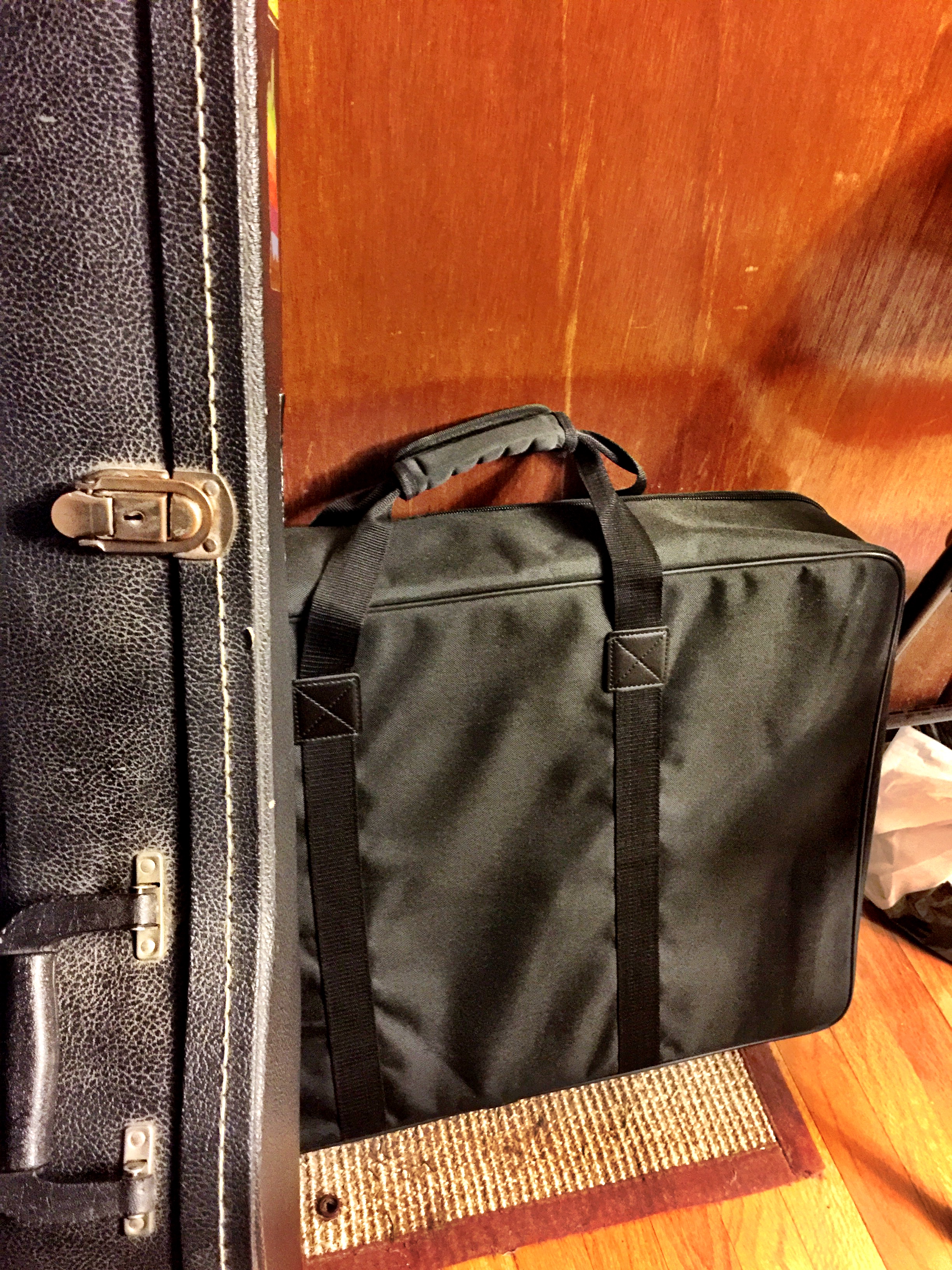 It’s almost 8:00pm here and I haven’t done my stupid daily update that is boring all of you to tears.  Never fear.  In the words of the Yardbirds, Here’s ‘Tis.

Earlier this week I had announced that this particular song:

was complete and done and finished.  Today I changed my mind.  I remixed it.  It’s not much different, just a little more care was taken with it.  Oh, and I put some seriously retarded goofiness into it as well.  Gotta love idiots who put flangers onto drums, right?  Am I right?

Was not finished, but now it is.  I used a fuzz box.  How have I made it this far into life without owning a real fuzz box?  Fuzz boxes and Phasers are the big overused stomp box gimmicks for this year’s project.

Was also not finished, but now it is.  This holds the distinction of being the only song in the batch of 14 that did not have any work done on an iOS device.  This was all done on the full GarageBand on my MacBook Pro.  I think you can hear the difference.  I am a little sad that I didn’t do the whole thing on a computer now.  The iPad and the iPhone are just so damn convenient   I mean it would have been tough to have written a song in the car in a parking lot waiting for a take out order to be ready if I had to do it all on an actual computer, right?  Am I right?

So that’s three songs that are finished, finished, finished.  There is one other that used to be finished but I have decided it will get a new vocal take on Monday.  There are two other songs that have vocals that I want to re-record, at least in part, that still need lead guitar parts.  Then there are seven (7) more that don’t have any vocals yet.  RPM requires 10 songs.  FAWM requires 14.  I have 14 in progress, I could call FAWM done now but I won’t.  Finishing the vocals for a total of 10 songs on Monday is definitely doable.  Getting up to a total of 14?  That’s a little more difficult.