It’s Autumn. Fall. I really don’t like Fall. I kinda hate it. Here’s one reason.

We caved in and had a landscaping team clean up our yard today. The main reason they were here was to fix and clean the rain gutters on our roof, but they also cleared the yard. Awesome.

Less than an hour after they left I looked out the window and it was literally raining leaves. It was the front of the house. We don’t have any trees in the front of the house. Two doors down from us they have a huge oak tree. The leaves were falling off that tree and the wind was blowing them all the way to our yard. At this rate, within a day or two you won’t be able to tell that our lawn was clear today.

One slightly related note. In our back yard the leaves fall off the trees in the woods and the wind blows them all right against the house. The yard itself is usually not too bad, but the base of the house is a leafy mountain. There are some windows along the foundation of the house but only one of them can actually be seen from the living space in the cellar, the rest are in the storage areas. After the landscape folks left, and at the start of my lunch break, I went down stairs to put some laundry on. I couldn’t believe how much light there was down there. Turns out that one window was free of leaves for the first time in a year and you could actually see through it. It was kinda cool. Of course, by the end of the week the window will be blocked again. Yippee.

Helicopter flying directly over my head.

I have not played the guitar in a while now. It’s the weekend so you’d think I would be in the clear, but there’s a lot of stuff to do.

The grass in front of the house is getting long. The grass in the back and on the side have yet to be mowed at all this year. I’m super tall, six and a half feet tall or so, and I am literally scared to go into the back yard because the grass is so tall I am afraid I’ll get lost*. Seriously. That’s how badly it needs to be mowed. The weather looks clear, though slightly on the scorching hot, inferno, hell fire side of the temperature gauge.

More important, in the afternoon we have a high school band concert. The final high school band concert. I didn’t think we were going to get one, thanks covid, but we are. It’s going to be outside in the parking lot and my step son is playing with every single ensemble. Piano in some parts, and percussion in others. He’s awesome, the concert is going to be awesome, it is also going to be held in the parking lot because of covid in the scorching inferno hell fire temps, but it’s all kinds of awesome.

If I can sneak some guitar time in, I will. I’m not holding my breath though.

On an unrelated note, I got a notification on my laptop to reboot for a Mac OS update. I cancelled the notification because it was in the way of a window I was trying to use, but once I was done I rebooted my computer. When the computer came back up I was prompted to take a Mac OS update. What is this, Windows?

*When I said I was literally afraid to go into the back yard because I would get lost in the tall grass, I was not being literally. Allow me to stand here and watch your brain explode. Boom, babie.

Another unrelated note, I think the V key on my ancient apple keyboard is dying. Uh oh.

Oh praise be to whatever gods control Spring yard work, our lawn mower started and ran without issue! (well… it took a while to get rolling, but once it did, aces!)

Our streak of Springtimes with dead lawnmowers may have ended at two! So far at least. I only did 2/3 of the front yard and there is still oodles of time left for this bad ass mother fucker to die, but so far so good!

Oh yeah, also MY BACK HURTS SO MUCH!

Raking at sunrise. My back is killing me.

The time has officially come. The grass needs to be mowed. 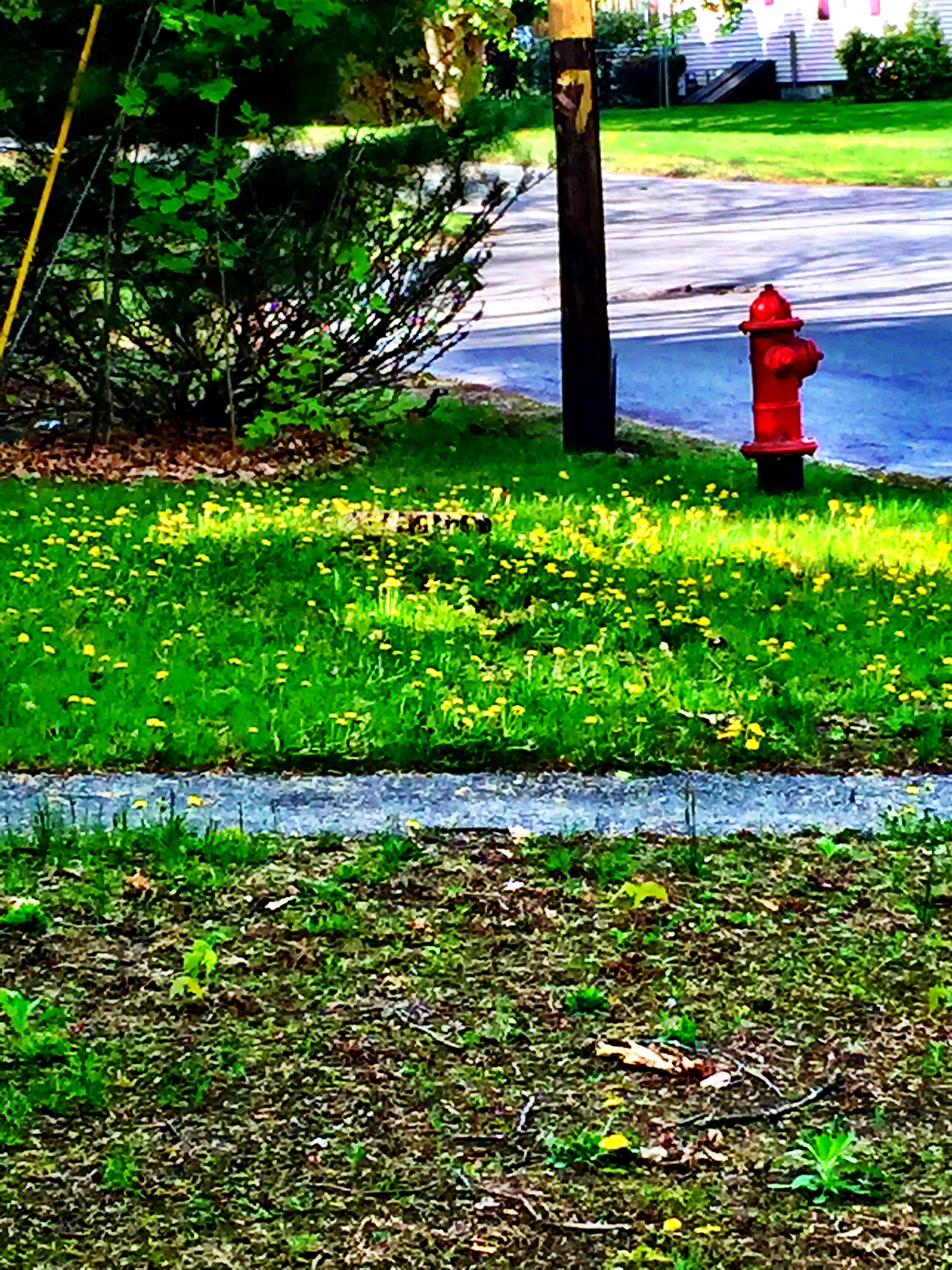 I had to literally dig the lawn mower out of the garage. All of the supplies for the bathroom remodeling job are in the garage now. We had planned to have it finished by the New Year. Whoops. That means all of the Spring time stuff is buried.

I was able to dig a path and get the mower out onto the drive way. Win #1. Then it started on the third pull. Win #2. Then I started mowing. 52 minutes later (approximately) the whole front and back yards were done. The whole thing. In less than an hour. I haven’t achieved a feat like that since I was a teenager. Where the hell did that come from?

Now my beloved wife and I are sitting in the living room. Every window and door on the first floor is currently open and the gorgeous spring breeze is blowing through the whole house. It’s perfect. I’m actually thinking of taking my guitar outside and working on some new song ideas. After the winter we just went though I want to spend as much time outside as I can!

Another section of the yard is clear.  We seem to be getting short on grass, eh? 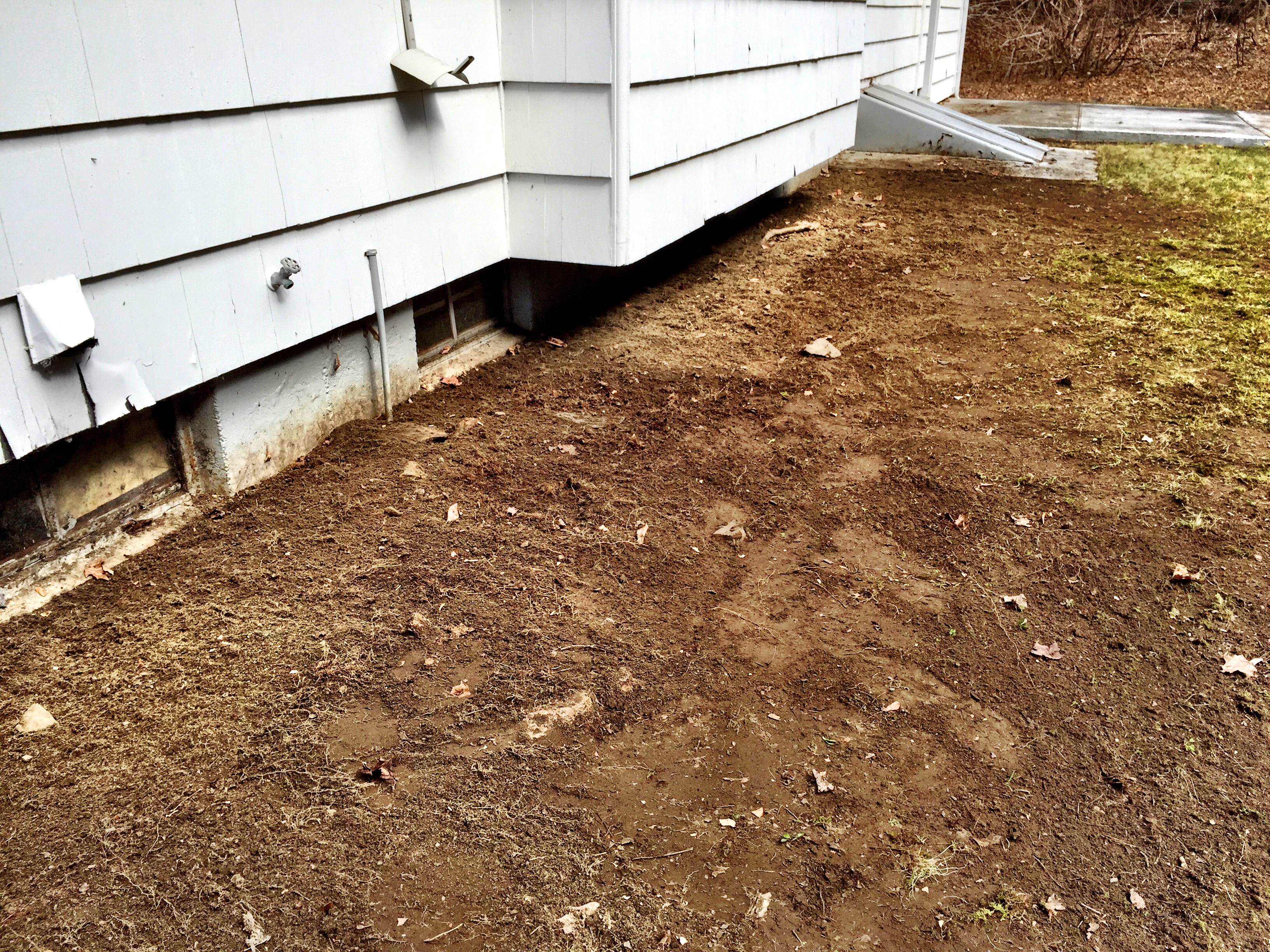 You cannot see our back yard from the street. Therefore when it’s time to do yard work almost all of our focus goes to the front yard. I do mow the back grass now and then, when it gets really long, but spring and fall clean up usually gets passed over.

The wind tends to swirl around the house, so almost all of the leaves that drop in the back yard end up pushed against the house. For the first time in two years all of the leaves are gone! It’s a miracle! My step son and I did most of it yesterday, and this morning I went out early(ish) and finished it. This soil is seeing sunlight for the first time in 8 seasons. It’s incredible! My step son and I then started tackling raking the rest of the leaves. We’re about 2/3 finished right now. The trick for the remaining third is that there are some huge downed branches blocking the way. I think I can move the biggest one, but it might require the purchase of an axe. We’ll see.

If we don’t finish this today then I will finish it next weekend and then start on cleaning up the front of the house. If nothing else, it’s exercise that will help with the whole weight watchers plan. There’s an upside to everything!

My step son and I went out to the long neglected back yard and did some yard work.

Seeing as no one can see the back yard unless they are stalking through the woods, I tend to let the leaves go and only worry about the grass getting too long. That means the wind blows the leaves against the house and they just stay there. Today we started the chore of tackling that particular pain in the scrotum. We got a lot of it done, but I have to go back out tomorrow.

The heavy rain and melting snow is turning out front yard into a swamp. I foresee re-seeding in our future.