Today is not just Mothers Day. It’s also my birthday. 51 years young and all that bullshit.

Also, I’ve spent the whole day with Jen, so it’s the best birthday ever.

When I was a kid I used to feel gypped when my birthday fell on Mother’s Day. This year I have bigger fish to fry.

Jen is making dinner. For herself. One of my fears going into weight loss surgery was guilt at putting a burden on Jen. I’m feeling quite a bit of that today. She is so encouraging and supportive and I don’t want to make things difficult for her.

I guess the point of this post is that I hope you’re all having a good day on my birthday. Do something fun for me.

I watered the plants, watered the christmas tree, did some laundry, took out the trash, determined that my November music thing is definitely over 30 minutes without adding another song (it’s actually over 40 minutes!), and then I started work.

It’s been a busy day at work too. It’s becoming a trend that halfway through my lunch break things blow up. Four days in a row now. That’s fun.

Nothing else to report on today on this chilly Monday. Just hanging in there, trying to get to 5:30pm, when I’ll make dinner for my love and me and then… I don’t know what. I’ve got seven songs to mix before December 1st, so I will want to do a chunk of that before bed. Other than that? No clue. Mostly, I’m just looking forward to a little time with the love of my life. I kinda like making dinner for her. Is that nerdy? Is it romantically nerdy? You be the judge.

My wife just let me know that she’s in an online debate regarding the Force Ghosts at the end of the special edition of Return of the Jedi.

Jen just asked me for the time. 9:41PM. I’m at my desk in the bedroom working on something on my computer (and writing a post about it). Jen has already gone to bed, but she’s still awake and baby talking to the cat. It’s pretty freakin’ adorable.

The Bruins lost to Florida. It was a nightmare of a day at work today. I did manage to close all three of my exercise rings but I am super wired from the zany day and just patiently wait to crash. The cat is now laying down on my side of the bed. She may have actually fallen asleep there.

New furnace folks are coming tomorrow. I have meetings in the morning. How much do you want to bet they don’t show up until I am in the middle of a meeting.

I mentioned in passing that I had a craving for some M&Ms. Next thing I know there’s a bag of M&Ms in the pantry. 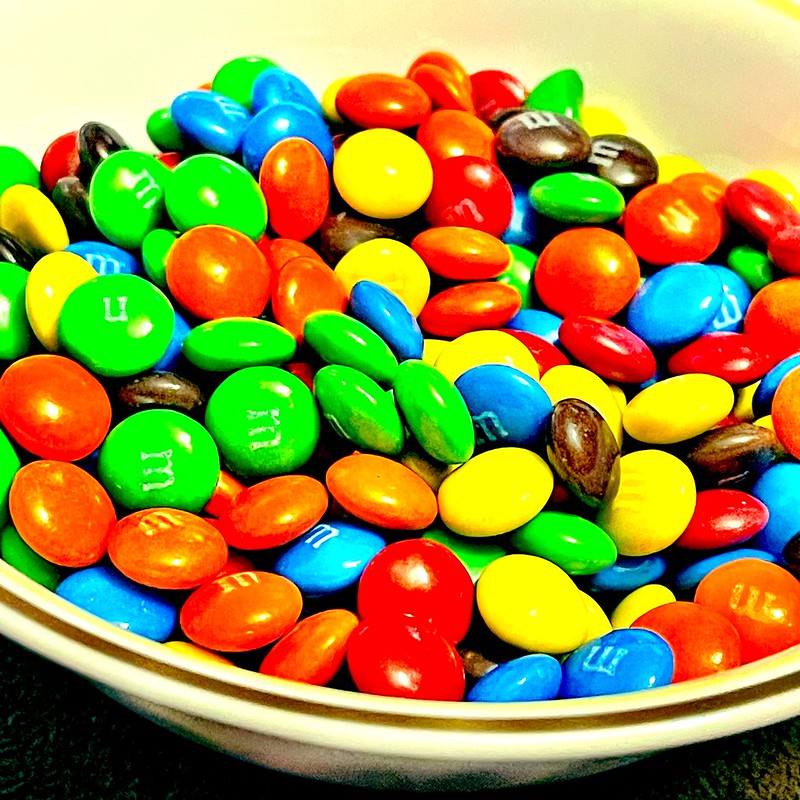 I’m crazy about her. Like, off the wall batty over her.

I want to get my wife one more gift for Christmas but I haven’t a clue what to get her. It’s a quandary, a conundrum, a pickle, a riddle wrapped in an enigma, stop me before I push this run on sentence any further.

What to get her? She’s already got a computer so that’s out. I am starting to stress out! Maybe a stress relief toy thingie. No, I get her that every year!

If only I could fit a new Tesla into her stocking. None of that self driving car crap for us though. As the Muppets once said, getting there is half the fun. (They said that, didn’t they? In “Moving Right Along” from the first Muppet movie?)

Google Chrome’s spell check is okay with Muppet, but it’s not okay with Muppets. I guess there can be only one after all. Is Kermit the Frog Scottish? He doesn’t sound Scottish, but then again the guy who played the Highlander was French so who knows what to believe, am I right?

I am so confused.

I drove my wife to work today. That’s just something we do now and then. She starts a whole lot earlier than I do, so I tend to get to work way too early. This morning I put the time to good use. I sat in the parking lot watching Family Guy on Netflix on my phone.

We went on a dinner date tonight. It wasn’t planned. It just happened. I love my wife so much.

Yeah, I did a my-year-in-pictures thing the other day. It was fun. What the hell, thought I, why not do it again? This time I’ll run fast and loose with the whole one-pic-from-each-month thing. I’m crazy like that.

We have to get our pics of the Sands Bridge in Methuen before she collapses. Or maybe I should say before she finishes collapsing. It’s already started. Also, I don’t think I found a relative in the Grove Street Cemetery, but who knows?

In February I finally finished an RPM Challenge on time. It only took me five tries. We also got a new bed. Jen’s penguin approved.

In March, the kids and I became wilderness explorers. Hipstamatic came along for the ride. Actually, we just wandered around in the woods behind our house for a little while. It was fun.

April in San Diego. I want to go back RIGHT NOW!

May gave us baseball, Bar Harbor, and my first up close New England Lighthouse.

The picture pickin’s are slim in June, but we did get a new Rush album (and it is awesome) and we got another fantastic piano recital from the kids.

July offers more choices after a spontaneous trip to Boston, and a week long stay in Maine that included some time in the mountains of New Hampshire.

In August we went to the Top of the Hub for the first time in my life. The views of my city were spectacular. We also spent some twilight time on Hampton Beach.

September had mountain waterfalls, leaf peeping, my first ever attempt at photo-walking in Tewksbury, and more Rush.

The camera didn’t come out much in November, but I did torture the cat, and my wife, with my camera phone, and we did celebrate Turkey Day.

And there we have a second view of my 2012 in pictures. Forgive the gratuitousness.

Still, it doesn’t measure up to what we feared about my wife yesterday.

Jen has had a rough time with antibiotics lately.  After stopping her course of antibody number two, she had a nasty headache on Wednesday.  Yesterday evening it came back, along with some weird sensations on her face.  The emergency room was recommended by her doctor’s office.  It turned out to be just another mild illness piled on top of the other nastiness she’s been fighting off for three weeks or so.  She’s okay, just not feeling terribly well.

They took her out of the room to do some tests and I fought my nerves by playing with hipstamatic… as usual.

I even took a creepy hipsta-selfie.

Today we get to see how the new antibiotic goes.  Her work schedule is very full today, so I haven’t heard anything from her.  I sent her a “how ya feelin'” email, but no word yet.  I take that as a good thing.  If she were feeling sick she’d tell me.

I want her to be feeling better.