10 years ago today we bought a house. September 29, 2010 was closing and moving day. Right smack dab in the middle of the biggest economic down turn since The Great Depression we did our part to help our nation recover by sinking great big gobs of money into our home. With the exception of our wedding day, it was the biggest thing I’ve ever been a part of.

10 years ago today, this place was a house. Today it’s a home. Thanks to the friggin coronavirus, it’s also two offices and a couple of classrooms, but mostly it’s a home. Our home. I love it.

They are gone. We can relax now. Well, now that everything has been thoroughly disinfected and all.

They used a couple of our pans to empty out the drain hose from the old washer. Those pans are now test driving the new dishwasher. They also told us that the metal rack in the microwave oven is safe because it’s a single, continuous piece of metal and there are no arc points. I’m sure that’s true, but I’m still removing it.

We had a plan to rearrange the kitchen and completely change the look of the front of the house.  It all hinged on moving the fridge to a new location.

We moved the fridge and it fit in the space, but it messed up the traffic flow in an unacceptable way.  It was a really good idea but it just didn’t work out.

So instead of rearranging the kitchen over the next two nights, Jen and I rearranged our desks.  Well, the monitors at least.  She’s letting me use the gigantic curved screen puppy.

There are changes coming to the kitchen. This box is part of it. It wasn’t supposed to be delivered until next week. It is the heaviest thing I’ve ever had to lift on my own (not really, it just feels that way).

I had something that I wanted to write a post about but I can’t remember what it was.  Don’t get old, kids.  It sucks.

I already mentioned recording some guitars.  Three songs underway.  I posted a to do list earlier and all but one thing is done.  I swept and mopped the dining room floor, I filled the bird feeders, I started watching two shows on Netflix, Money Heist and The End of the F***ing World.  Two episodes into each and so far they are all right.  I can’t tell if End of the World is a black comedy, or an ugly drama that is sometimes funny.  Trying to answer that question is taking me out of it a little.

I got a delivery of replacement parts for my CPAP machine last week and I finally got around to putting the new parts onto the machine.  Everything that could be changed has been.  New hose, harness, mask, filter, and (for the first time) reservoir.  Also, reservoir is a difficult word to spell.

But what the hell was it that I wanted to write about?

It’s really hot out and it’s big time spring and my mild allergies are flaring up like mad.  Probably because all of the windows are open and I just went outside a couple of times.  My head feels a little stuffy and funky.  I’m going to go flake.  Talk to you later.

When we had our garage remodeled into a bedroom suite the only thing we didn’t get installed were screens for the new windows. That means we went the whole of last summer without being able to sleep with the windows open.

Eventually we will get screens installed, but as a temporary fix, I bought a couple of these things on amazon (the one and only non-food purchase I’ve made since the social distancing started. I’m kinda proud of my sudden frugalness).

I told my wife I’d clean the bathroom but I’m sitting here listening to the Jakszyk/Collins/Fripp King Crimson Projekct album and typing this.

Is there anything better than crawling into a bed with brand new sheets? That first time when they are crisp and cool and wonderful?

To update my earlier post with today’s agenda.  I still have some laundry to do, but the important stuff for today is done.  Next up is putting the newly cleaned sheets onto Harry’s bed and then its time to clean the old bathroom.  Also, next up is maybe getting caught up on The Flash?

Tonight we sleep like royalty under our new sheets and blankets! 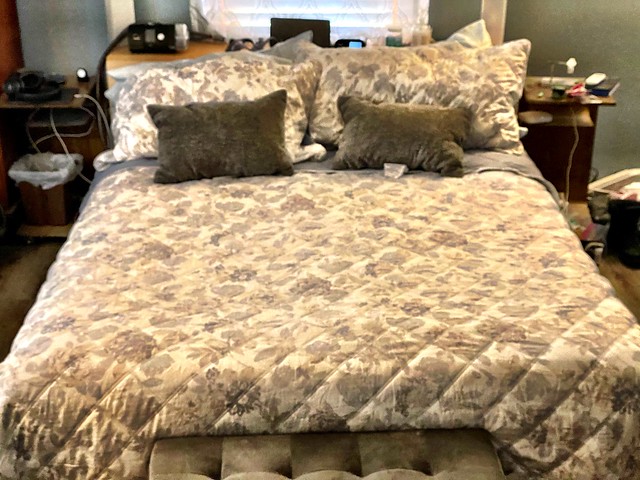