This is going to be long and lame. The tldr is that I put lead guitar on one song and then mixed it and it’s done.

That Pedal Show. That Effin’ Pedal Show. Easily the best thing for guitar players that I have seen on youtube. Nothing I’ve seen is even in the ballpark. They keep messing with my head. It’s getting down right freaky now. It’s like they somehow can see into my soul. What the hell?

They did it to me again. They came out with a video that covers a topic that I’ve already been neck deep into, and one of them will mention something in passing that doesn’t even directly apply to the topic they are discussing and it hits me like a ton of bricks and fundamentally changes whatever it is I’m doing on my own. Damn it!

Due to COVID-19 they are scrambling a little to keep producing content. When the lock downs started (they are in the UK, though that doesn’t actually matter) they had a big backlog of shows they could release. No one expected this would last as long as it has and now their backlog is gone. So they started projects that they could do at home, and both hosts hit on the idea of writing and recording some music.

The video they released today is titled “5 Things We’ve Learned Recording Guitars & Amps At Home.” They are more or less coming to conclusions that I’ve already come to in the past. Namely, that recording guitars using amp or cabinet simulators or impulse responses can sound pretty good, but it feels wrong. I used to use amp sims built into GarageBand and it was fine but it always felt a little wrong to me. Next I used the cabinet sims built into my Fender Bassbreaker 15 and Vox MV50 amps. It was a little better, but it still didn’t really sound really real… really. Eventually I decided to just cut the crap and put a mic on an amp for all of my guitar parts. I think I made that official in February 2019’s RPM Challenge. Did I do it in 2018 too? I can’t remember. Whatever, I haven’t used an amp or cab sim in a long time. Putting a mic on an amp sounds better to my ears, but even more important it feels better when I’m playing. It doesn’t feel like gigs or rehearsals feel because I can’t turn up the volume enough to have the sound pressure physically effect me, but it still feels real.

I’m getting to the point, but first I have to tell a back story that I am positive I’ve written about here before.

In 2000 I bought a 1979 Gibson ES-335 Pro on ebay. I’ve always wanted a 335. Not as much as I wanted a Les Paul, which is why the first high end guitar I bought was a Les Paul, and when that was stolen the second high end guitar I bought was also a Les Paul. My 335 has had a rough life. I’ve taken care of it the best I could, but some previous owner treated it badly. When I got it, it was seriously beat to hell. It was also covered in a thick nicotine grime. The binding around the edge of the body is supposed to be white, but thanks to some heavy cigarette smoke it is now yellow. I used the 335 and my Les Paul interchangeably during my time in Break Even (2003-05), including using the 335 exclusively on our CD. More recently, the years have been catching up to it. The electronics are starting to fail. I can’t tell if the solder is letting go, or the components are rotting away or what. Because it is a semi-hollow guitar, there is no way to access the electronics without actually taking the body apart and there is no way I am ever going to do that on my own. I may someday pay a luthier to do it for me, but that’s likely going to cost me a lot.

In 2018 Lizardfish played a gig where I decided I was going to give my beloved 335 a retirement party. One last gig using it as my #1 and then I declare it’s service complete and it stops leaving my house. As bad luck would have it, I had all sorts of problems with it during that gig. The signal kept cutting out. I had to switch to my Les Paul for about half of the show. It was sad, but it proved that I was making the right move. A short time later I bought my 2018 Gibson SG to replace the 335 as my #2. I brought the 335 out for one song during February’s RPM Challenge project because I wanted to have all three Gibsons on the same song. I think I also used it for some feedback on another song. That was it though. Other than those two little things, the 1979 Gibson ES-335 Pro has been retired.

Until today’s episode of That Pedal Show.

Both of the show’s hosts are Fender guys mostly. Dan goes for Telecasters and Mick goes for Stratocasters. They both own a gorgeous Gibson custom shop model that they often go to when they need something with humbuckers. Dan has a ’58 Les Paul reissue and Mick has an ES-335.

Now as I’ve mentioned, I have been doing a lot of recording lately through an amp at low volume. As I’ve also mentioned, that is the topic of today’s episode. At round about 29:35 of the video, Mick was talking about needing to feel a physical connection to the guitar as he’s playing (didn’t I just say I needed something like that?). He also said that when he’s playing loud he wants to play his Strat, but when he’s recording at low volume at home he wants to play his 335 because it resonates more. It’s partly hollow and when you’re playing you can actually feel the guitar vibrating a little in a way that a solid body guitar doesn’t.

My memory immediately flashed back to one of the first Break Even gigs in… 2003, I think. We were on a small stage, all five of us close together, and we were loud. Like… really loud. Playing my Les Paul at a sick volume like that is a wonderful experience. I had never played my ES-335 in that setting though and when I did it was absolutely magical. The hollow portion of the guitar has two F holes and as we were roaring away, the air was rushing through those holes. Every time Bob hit the bass drum air would literally flow out from inside the guitar. Every time Dave hit a note on the bass it happened. Every time Steve and I hit a chord just right it happened. I never even imagined I would be able to actually FEEL THE AIR MOVING THROUGH MY GUITAR. Like I said, it was friggin magic.

Lizardfish never gets loud enough to reproduce that effect. Every once in a while I’ll feel a little breath of air and it will bring me back to that first night, but it never happens consistently and it’s rare. When Mick talked about his guitar resonating I knew exactly what he was talking about and I realized that I was actually missing it. Back in February when I was recording with two amps I was playing louder than I ever get to play at home. I thank my wife and step kids for not losing their shit every time I played, but I haven’t done that since and in March, April, and May I’ve been quiet and I think it’s noticeable in the recordings because I am not connecting to it in the same way.

Well screw that, I thought, and I went straight down stairs and grabbed my ES-335. After work I took the two year old, rusty strings off, put some fretboard oil on the neck, and polished up what little finish is still on the body, put a new set of Stringjoy strings on, tuned it up, and started recording.

I only had one song that was ready for lead guitar, and it was one I was sort of avoiding. It was a 12-bar blues and I had left a ton of space for guitar solos. Like, waaaay more than I usually do. On the two occasions I set out to record leads I had skipped it because I feel like I am not playing well enough to justify giving myself that much solo space. I had actually written a song that intimidated me… like… what the hell, dude?

I plugged the 335 into the overdrive pedal I bought myself for my birthday a couple of weeks ago and just started playing. What I came up with is sloppy and hacky and not very good, but it felt good doing it. That’s what was important. It felt good. Also, fortunately the electronics didn’t give me any problems, which was helpful. If it had failed this would have been a much less happy post.

So first, the song. Then some pictures.

And that, my friends is how watching That Pedal Show inspired me to do something new with my music… again.

My Gibson SG Standard doesn’t follow the same serial number method as my two 70’s Gibsons.  There is much less to play with now as the first two digits are the model year (not necessarily the year the guitar was built, kinda like cars) and the remaining seven digits are just a counter for that model year.  My guitar is the 22,586th 2018 model guitar.

I never noticed it before, but there is a Made in USA stamp on my Les Paul.  My ES-335 does not have a Made in USA stamp, but it does have SECOND in it’s place.  It was a factory second, kinda like clothes were a slight defect will keep the item from passing Quality Control, but it isn’t bad enough to stop it from selling at a slight discount.  I believe my 335 is seconded because of a hole in the finish on the back of the guitar.  It’s never bothered me in the slightest.

My SG includes both a Made in USA stamp and a 2018 Model stamp.  Just in case the serial number didn’t give it away.  I bought the SG new and I have all of the case candy.  That includes a filled out QC checklist card that is dated 10/12/17… so my 2018 guitar was actually made in 2017.  It has a model number too, SGS18HC… something or other… CM1, or CH1, or something like that.  The hand writing is a little tough to make out.  They also sent a picture of my guitar sitting on the QC work bench where it was apparently plugged into a Boss tuner pedal…. I don’t like Boss pedals.  That actually makes me sad.

As for the model number, SGS is SG Standard, 18 is the model year, HC is probably hard shell case.  The rest?  I don’t know, and Google doesn’t tell me anything.

Well, that’s it for serial numbers for my electric guitars.  I suppose I could go look at my Takamine acoustic 12-string but… I don’t wanna.

In case you’re wondering, I just finished the last rhythm guitar part for March Music.  On to vocals and lyrics and awful next. 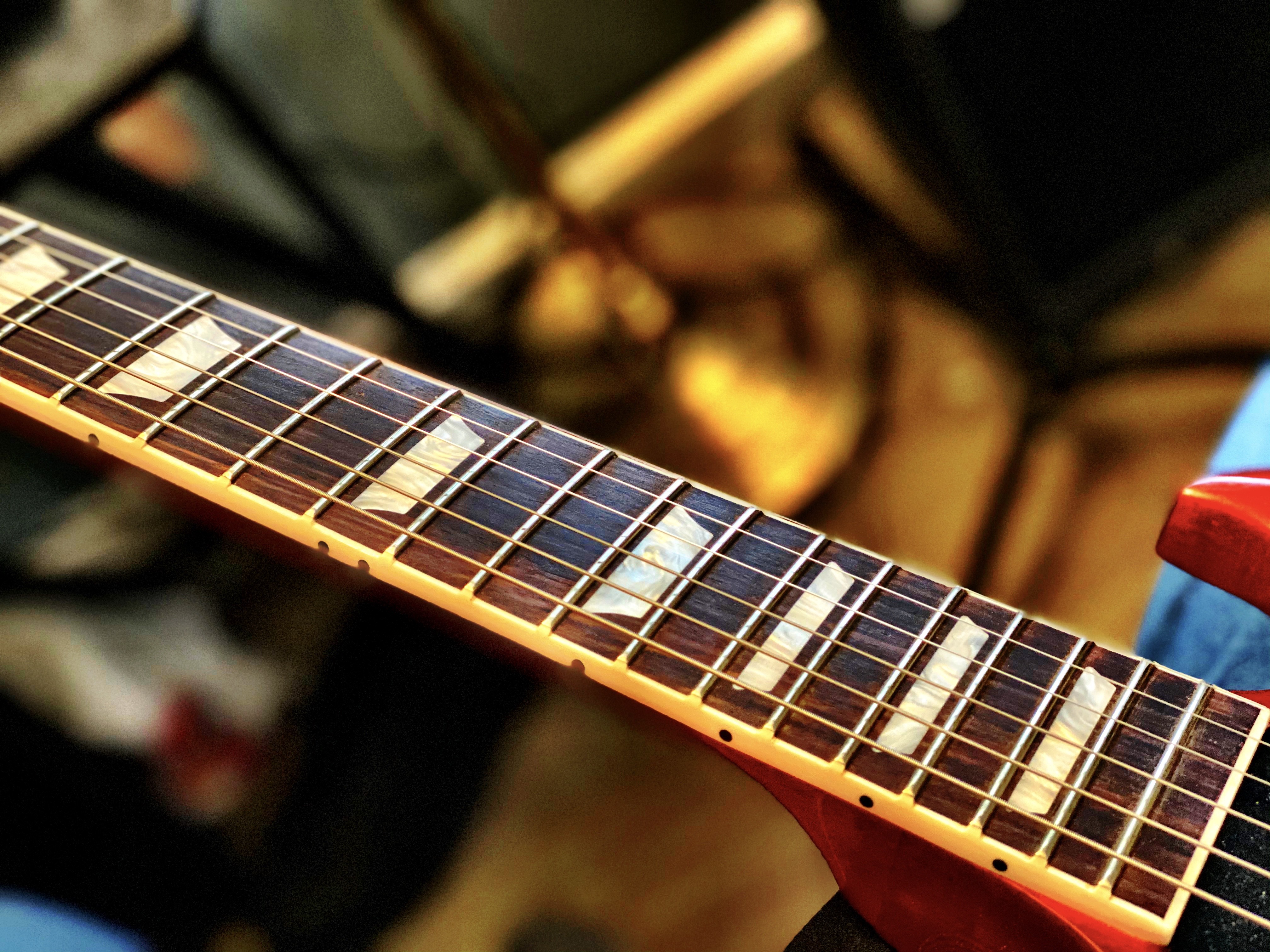 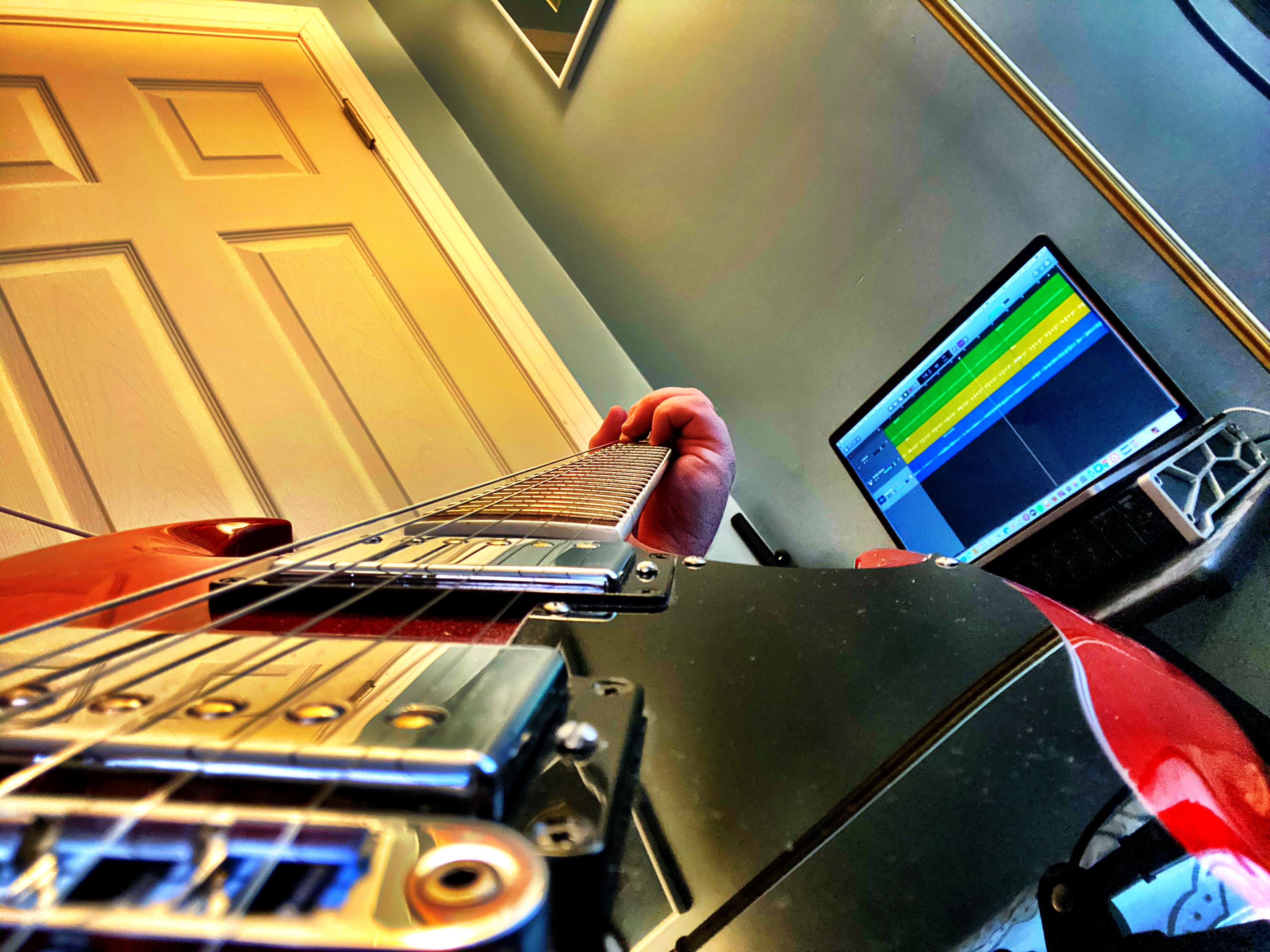 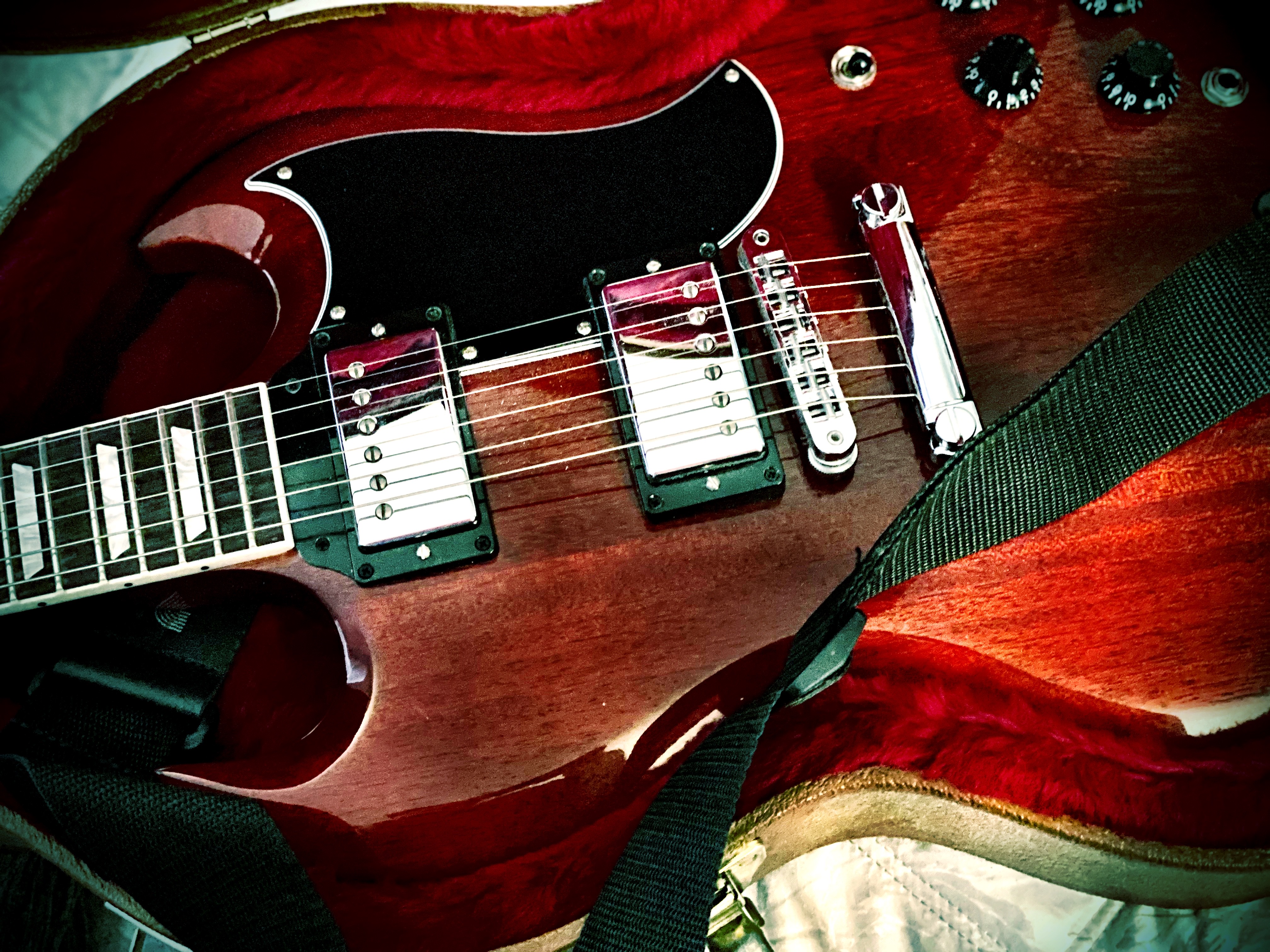