Lunch time came and I finally couldn’t stand it anymore. I pulled a power cable off of another amplifier and took the new (used) Vox AC15 for a spin. Much to my surprise it actually works. Jen was still working so I didn’t test the volume, but I did play it clean with the master volume and the channel volume low, and I played it dirty with the master volume WAY down and the channel volume cranked. I can still smell the tubes cooking. Nice.

Fortunately, while I was noodling UPS came with the missing power cable. The amp was eight days late. The cable was nine. It’s here though. My ES-335 is feeling like it might need some new strings. Other than that I think I’m ready to record some guitar tonight.

I should note that I still haven’t actually plugged in the new power cable yet. Am I counting my chickens before they hatch? Probably. Oh well. I’m sick of this shit. It’s over. Let’s boogie.

Man, youtube… every once in a while you’ll see something and it will just click for you.

I just watched an episode of That Pedal Show where they talk about delay pedals.  I have a really nice digital delay on my pedal board right now, a Wampler Faux Tape Echo, and I have been using the crap out of it.  I use it’s tap tempo switch and it’s subdivision switch and I get dotted eighth note delays and I make all sorts of groovy The Edge style rhythmic patters and it’s just so much damn fun.

It’s a great delay pedal but it doesn’t really do oscillation.  Oscillation is when the pedal feeds back on itself and makes all sorts of glorious noise.  If you mess with the delay time control it changes the pitch of the noise and makes it even gloriouser.  I have a really cheap analog delay that I am not currently using.  It’s from one of those generic, low cost, Chinese companies.  Donner, I think?  A Donner Yellow Fall?  I think that’s what it’s called.  After watching this video I am going to put it on the board too so that I can have noisy fun and still have the digital tap tempo and subdivision stuff.

In all my years of playing electric guitar I’ve almost always had a delay pedal, but I’ve never been a delay pedal guy.  Now I have all this youtube silliness to inspire me to do new and different (and yes, goofy and noisy) things.

Thanks, That Pedal Show!

Say hello to the most adorable little overdrive pedal ever. 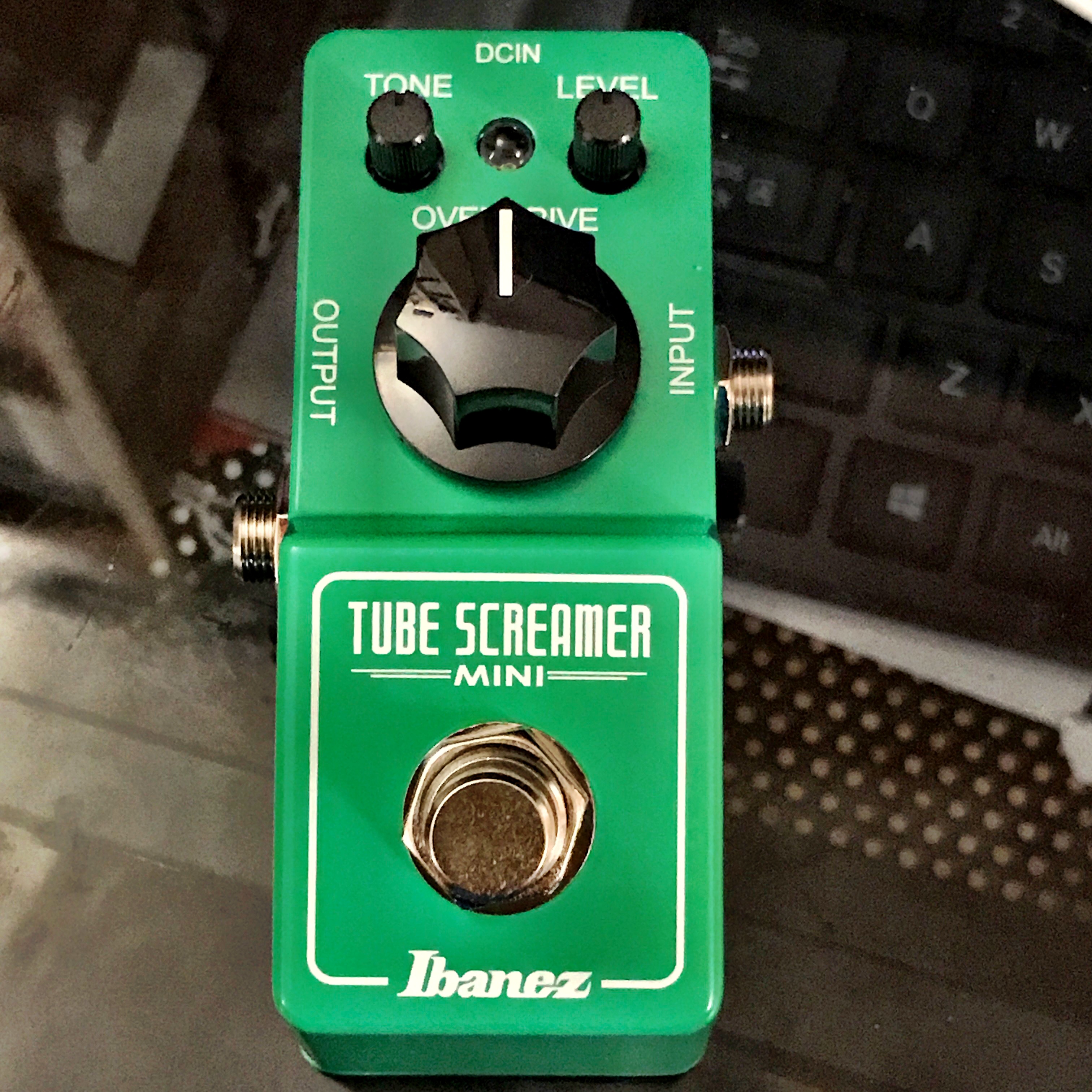 It’s so tiny and cute!

Why do so many guitar player accessories have blatantly sexist names? I don’t want to be a part of this particular problem but I’ve gone and made a hypocrite out of myself.

David Gilmour… listen to his Stratocaster sound on Pink Floyd records like Animals and The Wall. What does he use to get that killer tone? I want that killer tone too! How can I get myself one step closer? Well I can start by trying out some of the gear he used. How about his overdrive pedal? Awesome!

Except that it has an embarrassingly sexist name. I won’t share it because it would make me feel like an asshole. Even worse? I bought one on ebay. It’s going to be shipped in a day or so. Maybe I’ll put duct tape over the graphics painted onto the housing. It won’t fool anyone, but at least Mr Hypocrite will be able to pretend.

I feel like a jerk, and not just because I want to steal someone else’s tone.

I think I’m falling out of love with my amp.  I have a Marshall Valvestate VS265.  My friend Larry owned one and it had a feature that I absolutely drooled over.  Three switchable channels.  One clean, two distorted.  That’s not too unusual, but the part that I thought kicked ass was that all three channels had their own separate volume.  Meaning I could use one channel for rhythm and another for leads and the leads could be at a significantly louder volume and not get buried in the mix.  Abso-freakin-epically-lutely awesome.

I bought it in 2003 before my first gig with Break Even.  At the time I felt it was a little toppy, but Steve the other guitarist played a little bassy and the two tones meshed together fairly well.

Today?  I’m sick of being so trebly.  I can’t seem to find any bottom end no matter what I do.  It’s making me fall out of love with my amp.  So what do I do?  I’m considering buying a distortion pedal and only using one channel.  If I can get a fatter, warmer sound that way, it might be good.  The alternative is a new amp.  I spent the evening watching sales videos for Fender Twin Reverbs.  Yes they are usually on the top heavy side, and I’d need a distortion pedal, but something about it is making me want want want.  Sadly I don’t have $1500 lying around.

My pedal board had its first successful test at rehearsal tonight. My hands were cramping like crazy, but my effects were aces.

Next up on the gear wish list is a new pick up switch for my Les Paul, maybe a new tremolo bridge for my strat, a little wiring maintenance for my es-335, and maybe… A Gibson Dirty Finger pick up for the bridge position on the Les Paul. Maybe?

I need to swap the two on the far left so that I can access the stereo output on the flanger (that I have never used, not even once) but otherwise this looks okay. My Cry-Baby Wah-Wah will sit off the board on the right side, and the triple switch for my amp will go… somewhere. Best of all, this leaves me tons of room for expansion.

So I’m trying to get back into a band. If they’ll have me, the band that I tried to start a few years ago that carried on quite nicely without me after I bowed out might be willing to take me back. Still just talking, but I’ve got a list of covers to learn and we are trying to schedule a meeting.

It’s got me doing something I shouldn’t be doing. It’s got one of the medical conditions I suffer from flaring up.

The last time I played in a band for reals, I had a bunch of stomp boxes. The obligatory Dunlop Wah, a Morley volume pedal, a DoD flanger, a Boss digital delay, a DoD octave divider, and a Boss chromatic tuner, along with my Marshall combo’s channel/reverb switch. I would string them together, all with 9 volt batteries, on the floor at my feet whenever we played. I was always kicking them around to get them in and out of my way, depending on the song.

The other day I started looking at pedal boards to sit all of these things on so that I would have less to set up and break down. It’d be nice to have a power supply too, in place of all those batteries.

That lead to thinking of what additional pedals I could acquire. I use things in GarageBand that would be nice to have in real life. An MXR phaser. A univibe. A pitch shifter. Those are realistic, but thinking of them lead to unrealistic things like harmonizers and tape echoes (drool).

Next thing I know I’m bouncing between eBay and musiciansfriend and guitar center looking at amplifiers. The last time I was in a band for reals with Mike the Bass player I played through a Fender Combo. After that I used a sweet Marshall combo in Break Even. Today I was thinking that an old Fender Twin Reverb would be awesome. I’d need to get a Fuzz Face too. Then I thought, I’ve never owned a stack before, what does Fender have for stacks? How much does a decent Marshall stack with two 4×12 cabinets cost?