I just read that Hank Aaron died. Hammerin’ Hank. He might not have had a problem with a steroid user breaking his home run record, but I do. Hank is still the king in my book.

He played in the south in the early 70’s and he was chasing after a revered record that belonged to a revered white guy. Racist America made his life pretty miserable but he stood tall and did his job like the hero he was. Our world is a lesser place without him in it.

I did a book report on him when I was in elementary school. The only thing I remember from that kids book I read 40 some odd years ago was a story from when he was in his first season in the minor leagues. He was running the bases and his helmet fell off… so he stopped to pick it up and put it back on. How his coach was able to find the self control to not tear his head from his neck, I’ll never know. I was still playing youth baseball at that time. Needless to say I never stopped running (as slow as I was) when my helmet came off. Hank got in huge trouble when he did it, I wasn’t going to fall into the same trap. No way. 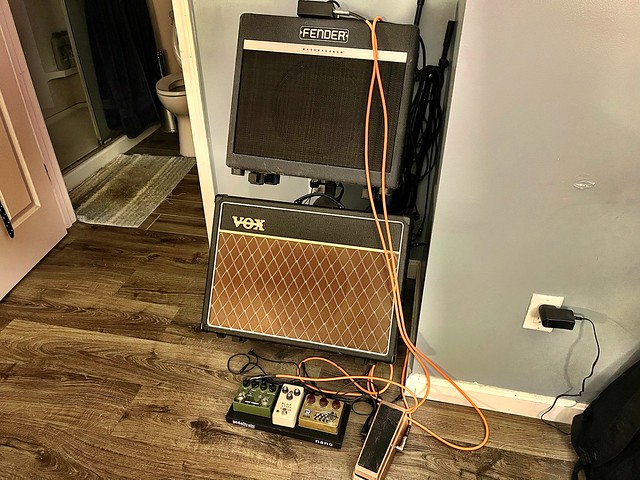 I’m redesigning my music recording nook in our bedroom with the intention of having it all setup and ready to go by the time the RPM Challenge starts on February 1st.

I’m still going to use two amps, but I ordered a stand that should allow me to stack the two little 15 watters on top of each other. I can’t just put one on the other as the feet are too small and the handles too tall. Also, all of the knobs are on top. So a stand that I can sit both of them on sounds great. The Amazon description said it should be able to handle two 1×12 combos, but we won’t know for sure until I actually have it in my hands. Amazon tells me it should be delivered today.

I’m building the teeny tiniest new pedal board. I put the big sucker away to save some room in the redesigned bedroom. The new one is going to be very small. I have a new crybaby coming, the Gary Clark, Jr signature model that I wanted to get when I bought the last wah pedal, That should also be coming today. Fingers crossed. That will likely sit on the floor next to the new tiny board. I will use the Ryra Klone pedal I bought myself for my birthday back in May for cleanish and low gain stuff. I have the Malaise Forever Black Lives Matter pegged for high gain at the moment, but I also ordered a Wampler Plexi Drive Mini which will either replace it outright or share the highish gain stuff. Not sure yet. I also want to put a fuzz pedal on the board. It depends on how much room I have on the teeny tiny little pedal train thing I bought. If I can fit the Wren and Cuff Super Russian I’ll use that, otherwise I’ll see about the Wren and Cuff Tall Font Russian or the Way Huge Russian Pickle. All modulation and delay will be outboard stuff added in the mix. I have spoken. This is the way.

The January album in the month has been scrapped. I still have two songs from round four of re-recordings that need lead guitar parts. Hopefully I’ll have the new setup (everything except the Plexi Drive which won’t be here for another week) put together tonight or tomorrow so that I can use those two songs as a test drive for February.

I’m a little sad about the state of the RPM Challenge website. The blogs and the forum seem to have been replaced by a Discord chat, but I have never been able to log onto it. It just hangs and never connects. I am going to miss all of the extra curricular RPM stuff. I’m almost nervous that I will miss it enough to take the fun out of everything. Time will tell.

It’s going to take a while for President Joe to undo all of the fascist shit that his nazi cheeto predecessor screwed up. In his first day in office though, he took some serious first steps.

He rejoined the World Health Organization because he’s not a moron. He instituted a mask mandate for all federal employees and anyone on federal property. He also created a covid response coordinator position. He signed an order preserving DACA, he reversed the muslim travel ban, he ended the idiotic ban on diversity training because he isn’t an idiot, he canceled the Keystone Pipeline permit and announced we will rejoin the Paris climate agreement.

First time in four years I’ve woken up and not felt a sense of dread over what he might have done while I slept. Is this what peaceful feels like?

I need to rebuild the music nook. Tonight.