I am all setup in my bedroom music nook for some November Musical fun. I brought the Vox MV50 Clean amp and the speaker cab I bought to match with it out of the living room and into the bedroom. They will go back when the kids come home for Christmas break because I usually keep that amp plugged into the piano so they can use it.

I still have the Fender Bassbreaker 15 here for use with the re-recording music. The cab is a Bassbreaker cabinet too and it looks almost identical to the Bassbreaker 15 itself so it almost looks like I have a Bassbreaker stack going. I don’t though. I have not brought out the A/B/Y switch to let me run the two amps together. Maybe at some point I will, but for now I just have one amp each for two separate projects.

Nutube… not a gimmick at all.

I recorded some guitar today.  I snuck it in before I left for work.  Nothing special, no doubling, no multiple amps.  I didn’t even use any pedals, just straight into the amp.  I can almost hear r/guitarpedals screaming in horror from here. 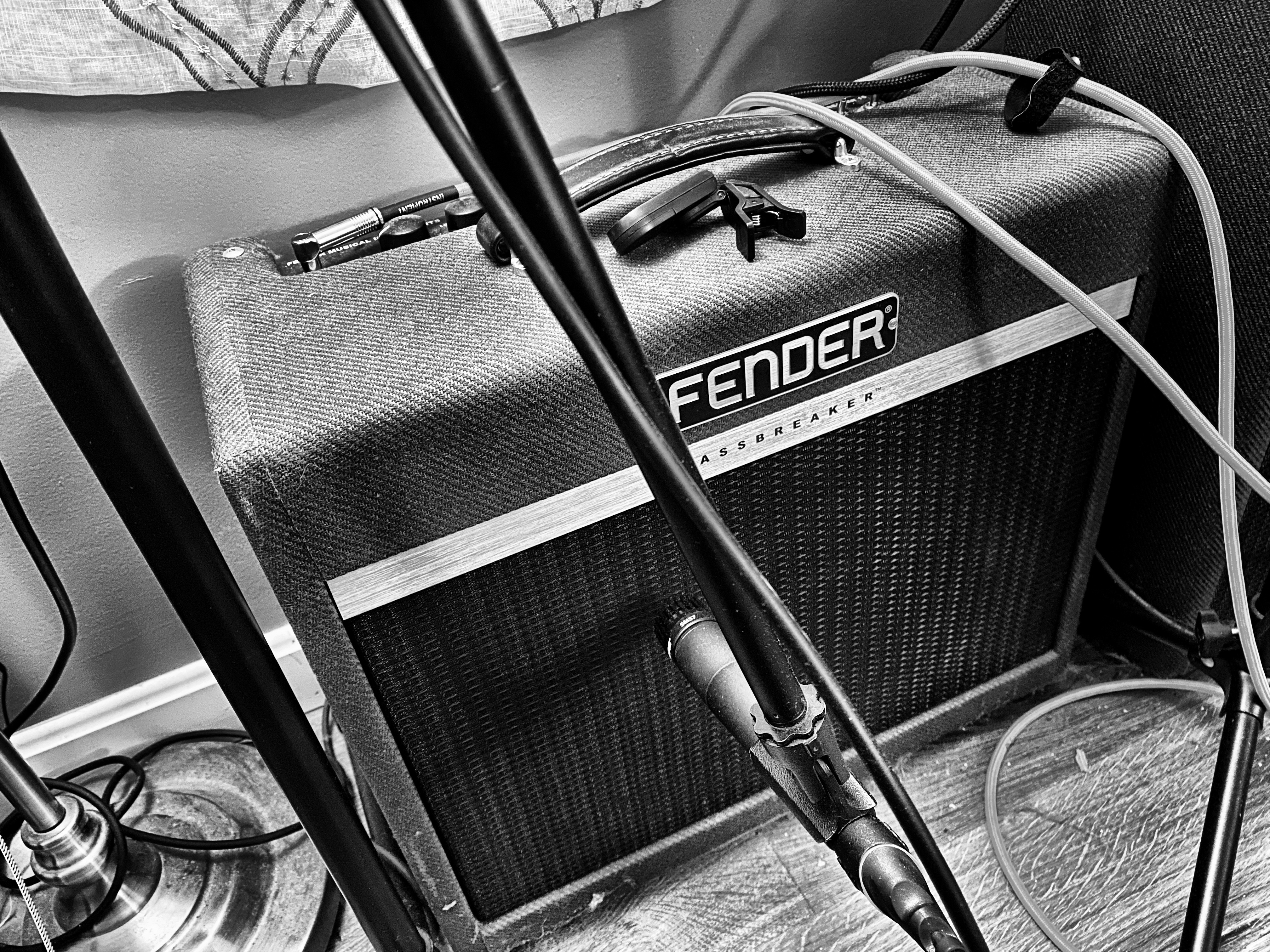 Considering that these are the fuzz and overdrive pedals that are not on the pedal board I will bring to the gig tomorrow, and that the gig board has three fuzz pedals and two overdrive pedals…

I think I might have a dirt pedal problem. 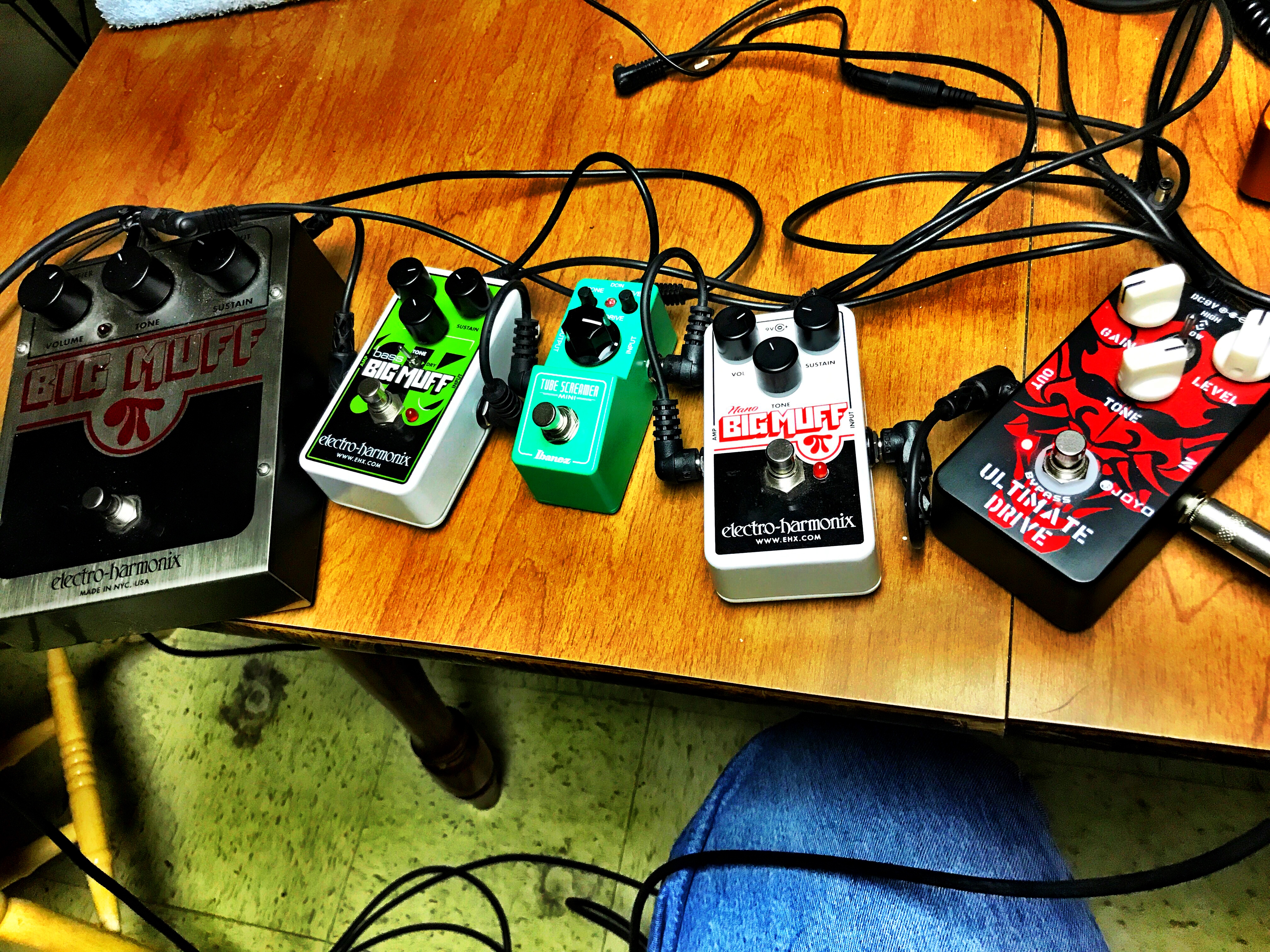 Hello my name is Robert and I’m a distortion-aholic.

Oh and while we’re on the topic, let’s enjoy the warm glowing warming glow of some vacuum tubes… 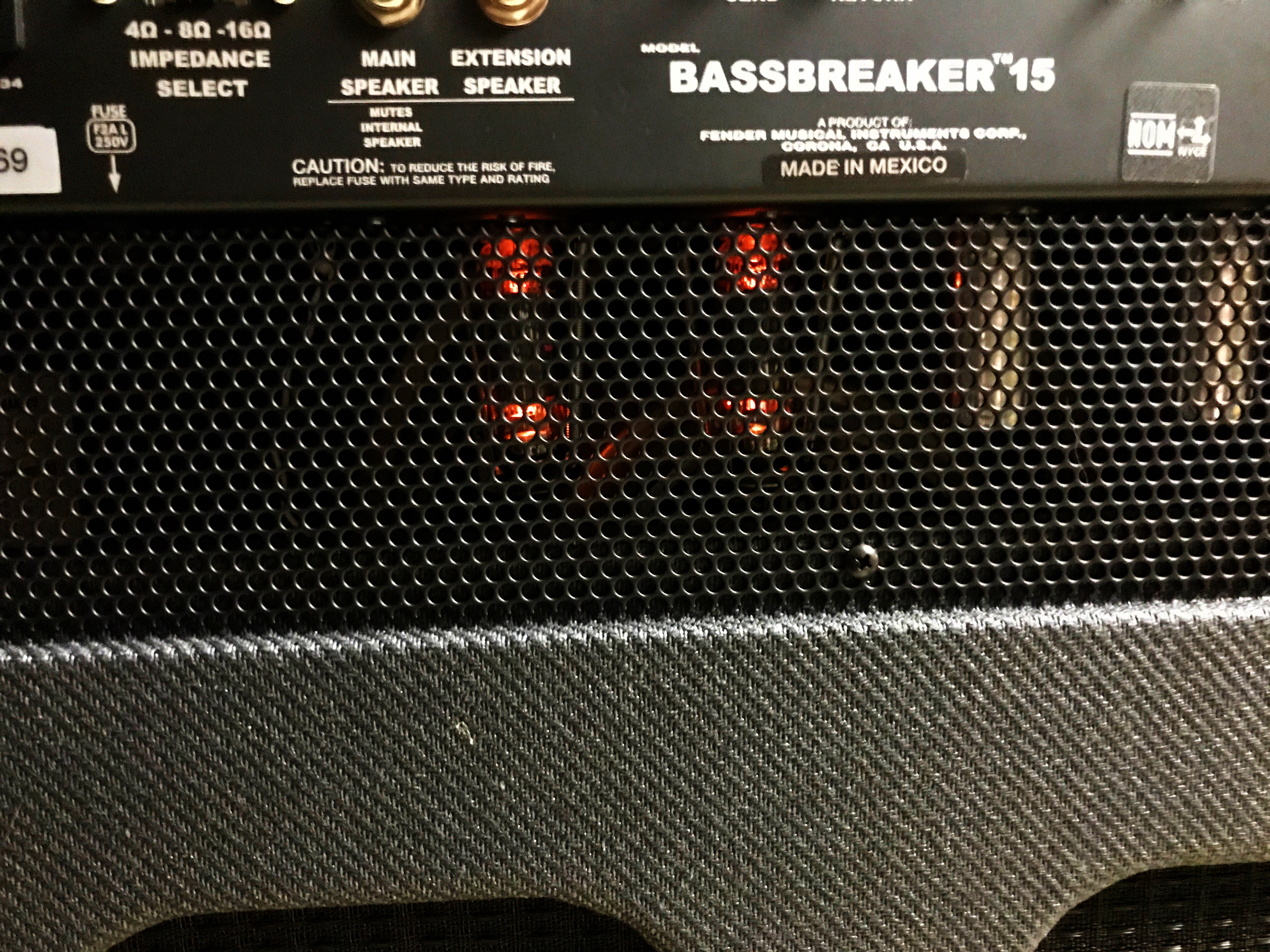 Amazon delivered a new stomp box to me today. It’s an EHX Soul Food. My first dip into the Klon Klone pool. I hope to use it as a boost. Not sure if it will be pre-fuzz to fatten up the clean sound (I use a Fulltone OCD for that now) or post fuzz for a volume boost for when I play solos. I am leaning toward that right now as my quick little test drive sounded way better than what I am doing now. Still need more research though.

I am home alone today so I took my guitar noodling as an opportunity to oversaturate the holy hell out of my vacuum tubes. What do I mean by that? I mean that I turned my amp up to 10. hehe

One thing to note, the speaker in my amp can just barely handle the volume at 10, but when I click on the pedal and boost the signal the amp goes crying home to momma. Something to think of for later, I guess.

Tonight I did something I’ve never done before.

I played guitar through a tube amp at full blast.

I have been reading up on overdrive pedals lately. Specifically the Klon Centaur. To me, the point of overdrive was always to make my guitar sound distorted without sounding like a heavy metal wanna be. I think I was sort of missing the point. Maybe an overdrive pedal isn’t meant to make you sound like a rock god, but instead maybe it’s just supposed to make your low volume amp sound like a loud, broken up tube amp. That made sense to me.

That was all well and good for a solid state amp, but what about a tube amp? I bought a Fender Deluxe Reverb last March, knowing that if I cranked it I would be able to overdrive the tubes and thus distort the sound. Of course that would require a huge amount of volume which even with my little 22 watt sucker would be more than I want to deal with. I read an article that suggested using an overdrive pedal with the volume knob up all the way, and the gain knob down all the way. The pedal isn’t going to distort your sound (much), but it might push your tubes up to the point of distorting for you.

The other day while I was getting my stuff together for the Lizardfish gig I tried it out with my Fulltone OCD pedal. It sounded pretty good. Not exactly broken up, but not exactly clean either. I planned to start using that setting after the gig. (no changes like that will ever be made without being used in rehearsal for a while at least)

Tonight I decided to try it with my Joyo Ultimate Drive pedal, which is an OCD clone. I wanted to see if the clone sounded as good as the real thing. It did. I was pleased, and spent about 45 minutes just noodling.

Then I just did it. I looked at my amp. I looked at the volume knob. How high do I have to turn that sucker before the sound starts breaking up? I had no idea at the time, but now I do. You start getting some nice overdrive at about 7. When you’re up to 10 it’s pretty sweet. It doesn’t sound heavy by any stretch, but when I kicked on the overdrive (volume at 10, gain at 0) it sounded really cool.

As for the volume level, when I got to 3 it was loud enough for me to want to turn it down. 10 was significantly louder, but the volume level seemed to stop going up around 6. Extrapolate… volume ceases to increase when the tubes are over saturated? Sound logical.

When the volume knob hit 10 though… oh it was glorious. 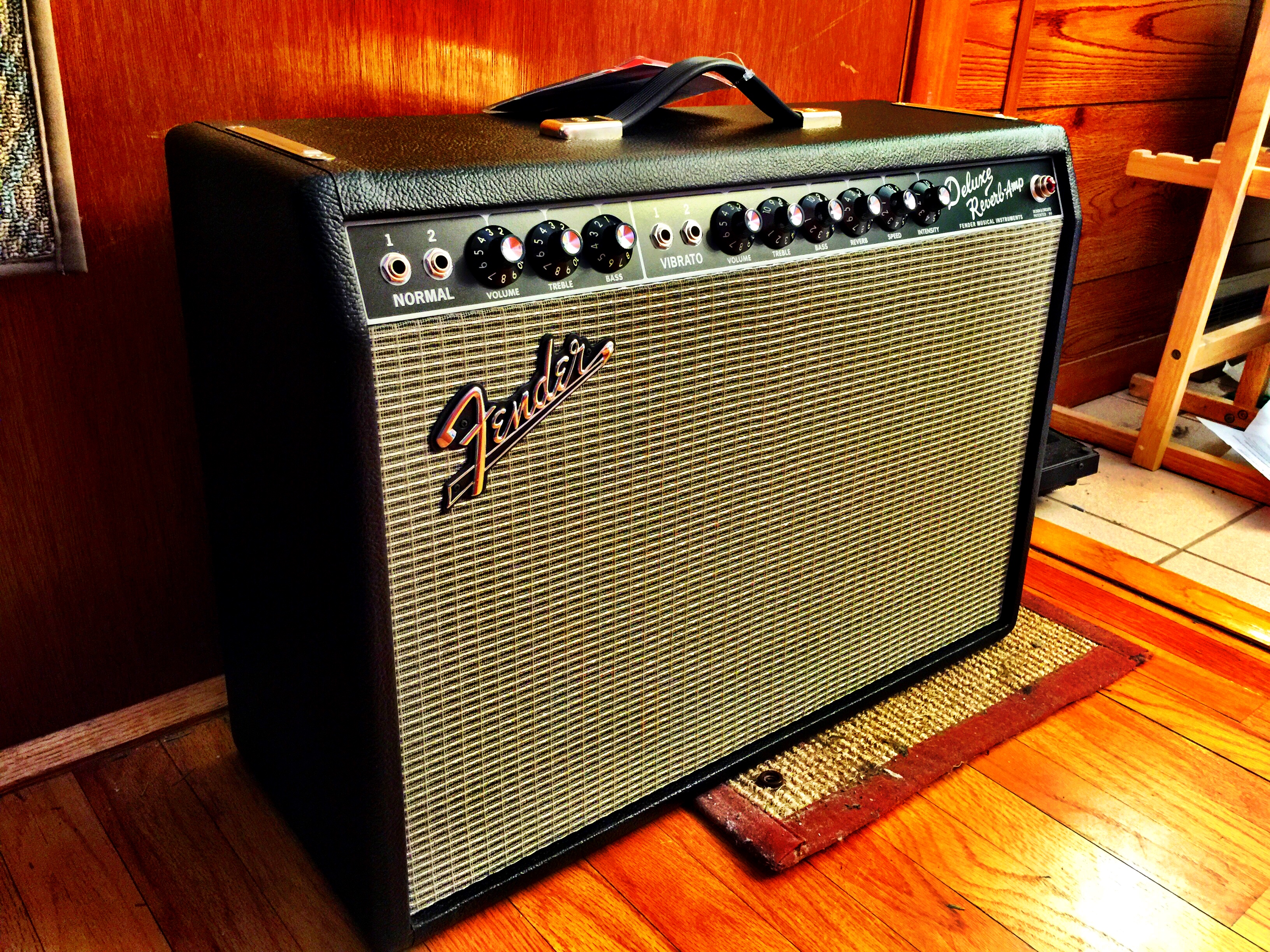 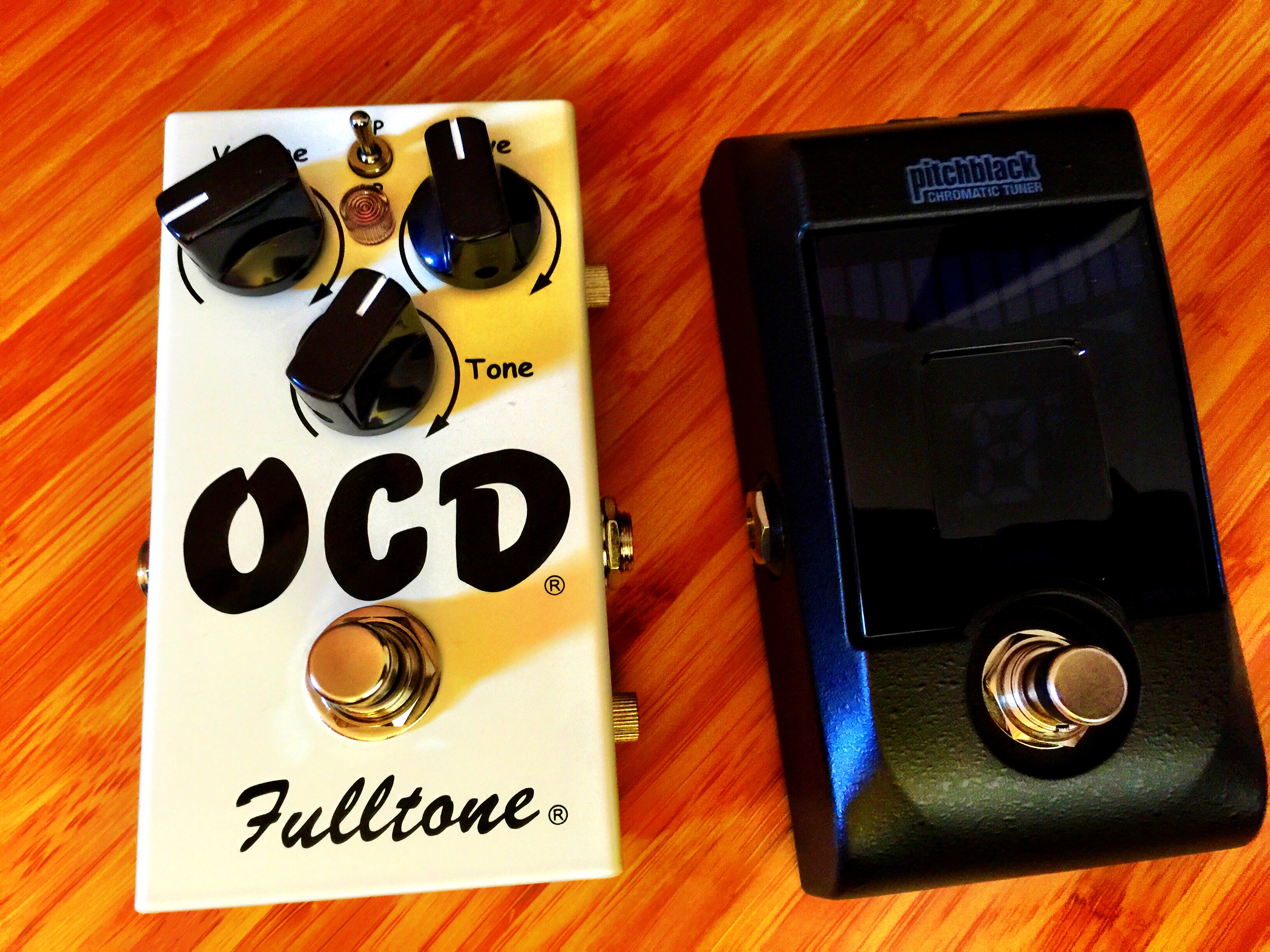 The pedals are for the stay-at-home/back up rig. The amp is more fluid. My 26 year old Fender Stage amp is dying a slow and painful death. That is one of the reasons I haven’t been recording much lately. It’s just not working all that well, and when it does work it is not very reliable. So I was definitely in the market for a new amplifier. I’ve been dying for a Fender Twin Reverb forever. Back in high school, the music department had a silver face Twin and that has always been my standard for clean tones. It was beat to hell and probably died a fiery death, but it was great. The problem is, the Fender reissue Twin Reverb is amazingly expensive. I could never justify throwing out that much money.

This week I started looking at the smallest of the reissue tube amps, the Princeton Reverb. It seemed like a smart way to go for a leave-at-home amp, but even that was seriously expensive. I started thinking about worst case scenarios though. If my Marshall should die, the Princeton would not really be a powerful enough replacement. The Twin would definitely work, but that damn price.

So I compromised I went with the Deluxe Reverb. It’s big enough to handle most of the places the band could possibly play, and it’s still small enough that it wouldn’t blow out the windows in the cellar if I wind it up while playing at home recording.

Now I just need to find some time to actually plug the bad boy in and play with it!