I am still planning on getting my old Les Paul, the 1978 Custom, some work. As in possibly a complete makeover.

When I do, I am absolutely doing this:

Add in a couple of 50’s PAF clones for pickups and some new frets (if necessary) and it’s going to be a brand new baby. After that I get the new Les Paul done in the same way and I end up with two spanky guitars. Oh yeah, then there’s the ES-335 and the SG to consider too.

Sorry… nerding out in a major way right now. I’ve been watching all sorts of Les Paul videos on YouTube while I try to finish my exercise for the day. I’m almost done. Maybe one more video. Let’s go.

The YouTube file wouldn’t embed on my first try. I tried a second time, but if it still doesn’t work you can click here to see what all the fuss is about.

Prior to the 50th birthday super gift, a new Les Paul Standard 50s, I was thinking about the future, post Covid and post college bills, where I was going to modify the shit out of my ’78 Les Paul Custom. I was going to go full blown boutique, cork sniffing snob on it. I was going to find the best sounding clones of original Gibson PAFs possible and put them in, and replace the wiring with a 50’s style harness and basically try and make my Custom as 1950’s-ish as possible.

Now that I have the shiny, wonderful new Standard, I’ve changed my plans to updating the holy hell out of the Standard and leave the Custom alone (except for the frets… and maybe the wiring harness). The question then is, do I try to turn my guitar into a modern knock off of a Les Paul from the late 50’s, or do I go for a modern knock off of Peter Green’s Les Paul?

I don’t know. What if I go for Peter Green and decided I don’t like the out of phase stuff? boutique, cork sniffing pick ups are expensive. I don’t want to have to play this game twice.

So we’re being goofy on the youtubes today, checking out some pick ups. I am going to say without a doubt that I will not be buying a set of Monty’s Guitars Bethnal Green PAFs. Partly because they don’t seem to be available yet, and also partly because the website makes me think they won’t be available in the US. That’s okay though. Let’s file this under research and Gear Acquisition Syndrome and just being a totally unabashed guitar nerd.

ADDENDUM: So I wrote the post while watching the video for the first time. After I published the video mentioned that you can buy them from Andertons if you’re in the US, and it’s not that they aren’t available yet, it’s that they are making them in small quantities and running out.

Eight months ago today I turned 50 and my wife got me an amazing birthday present. She bought me a Gibson Les Paul Standard 50s and I absolutely love it. I adore it. It gets me and I get it and we’re besties now and everything is perfect.

I haven’t played any other guitar since that day, even though I own a small but growing army of electric guitars (five, and my teenage self is in awe).

Well… I just broke the streak. I’ve been thinking of a gimmick for the RPM Challenge. Instead of just double tracking all of the rhythm guitar parts (which I always do), why not double track with different guitars? Maybe even different amplifiers? Sure it will make mixing more complicated, but it could be fun. If I do this, I expect the two guitars to be the new Les Paul and the SG Standard that I bought myself in 2018. Unless of course I finally brave the Covid and go somewhere to trade in my Fender Stratocaster for a Les Paul Junior, in which case the Junior would be the other guitar. That’s not likely to happen though, so it will be Les Paul in one ear and SG in the other.

Tonight I decided to break out the SG and use it on a Record Every Month song for January. I’ve got two songs going right now. They both kinda suck, but I’ll finish them. Now the song that has the working title of REM JAN 01 Mac has SGs where everything else since May has Les Pauls.

I just sat in front of the TV, noodling without an amp. Just connecting with the new kid in town. 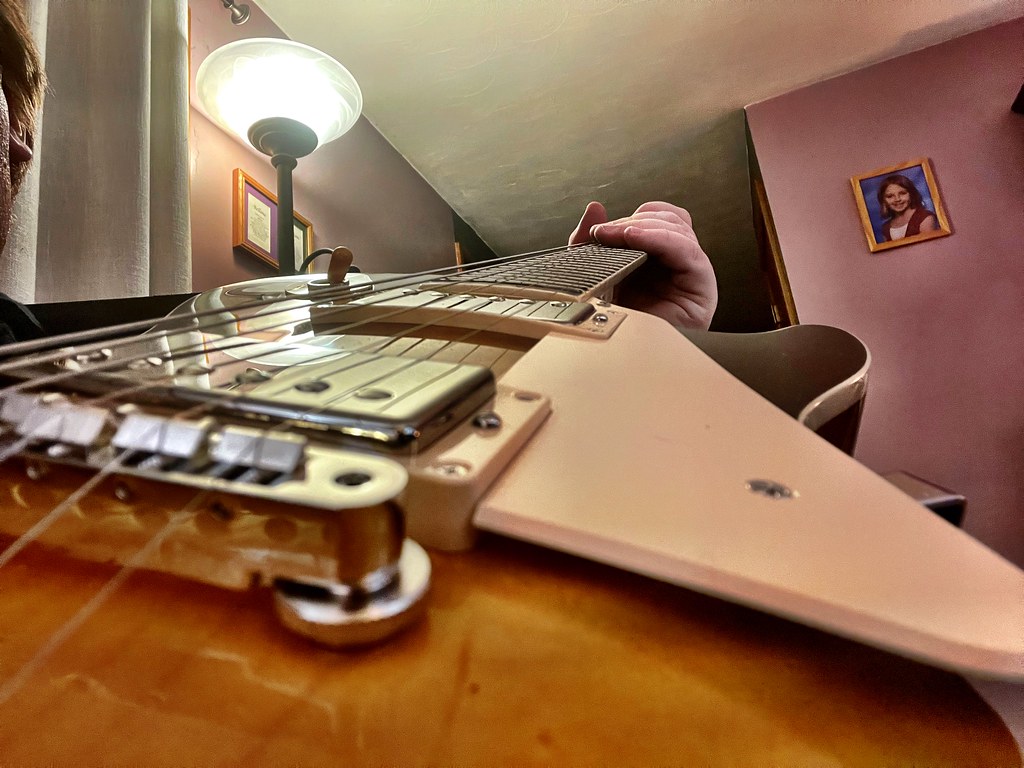 I love the nickel hardware and I love the trapezoid inlays. 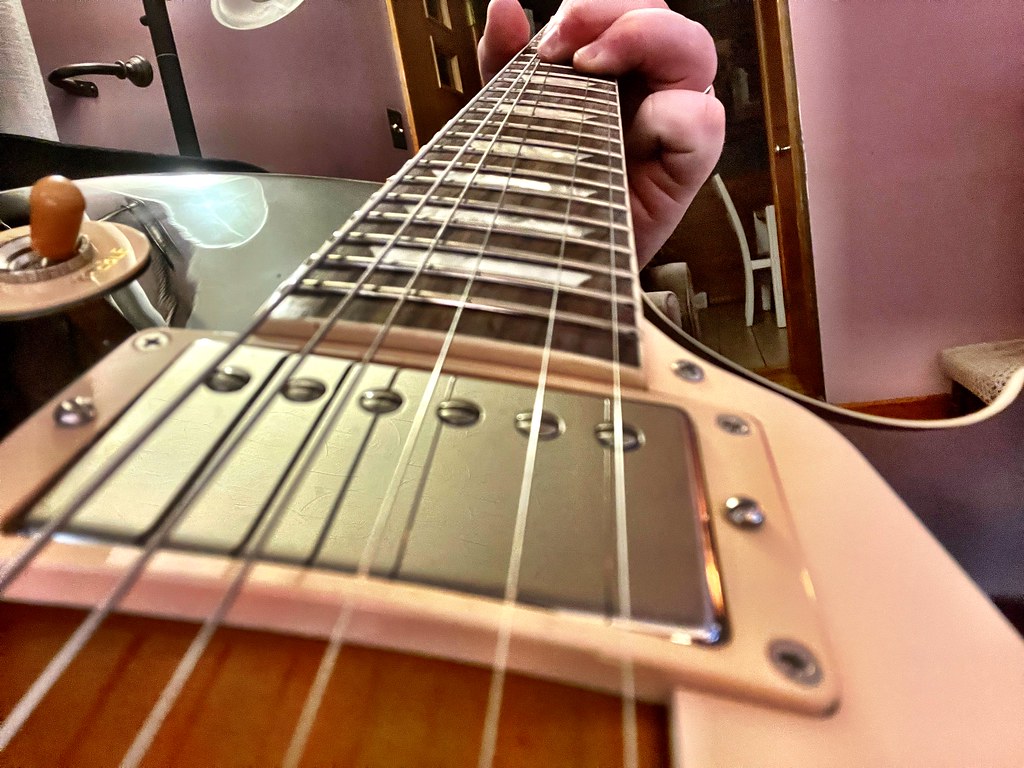 I love the grain on the maple cap. It’s not really enough to call it a flame, I don’t think, but it is freakin’ groovy. 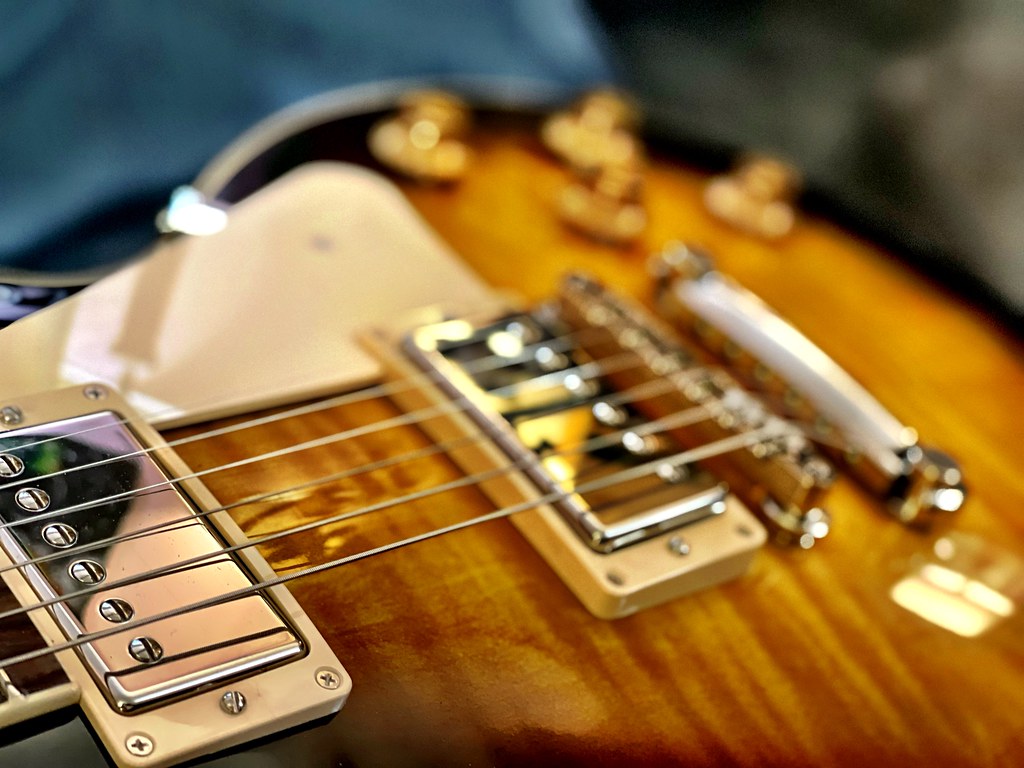 None of my other Gibsons have the little knob position pointer thingies. I can’t remember if my poor, stolen Les Paul Deluxe had them or not. 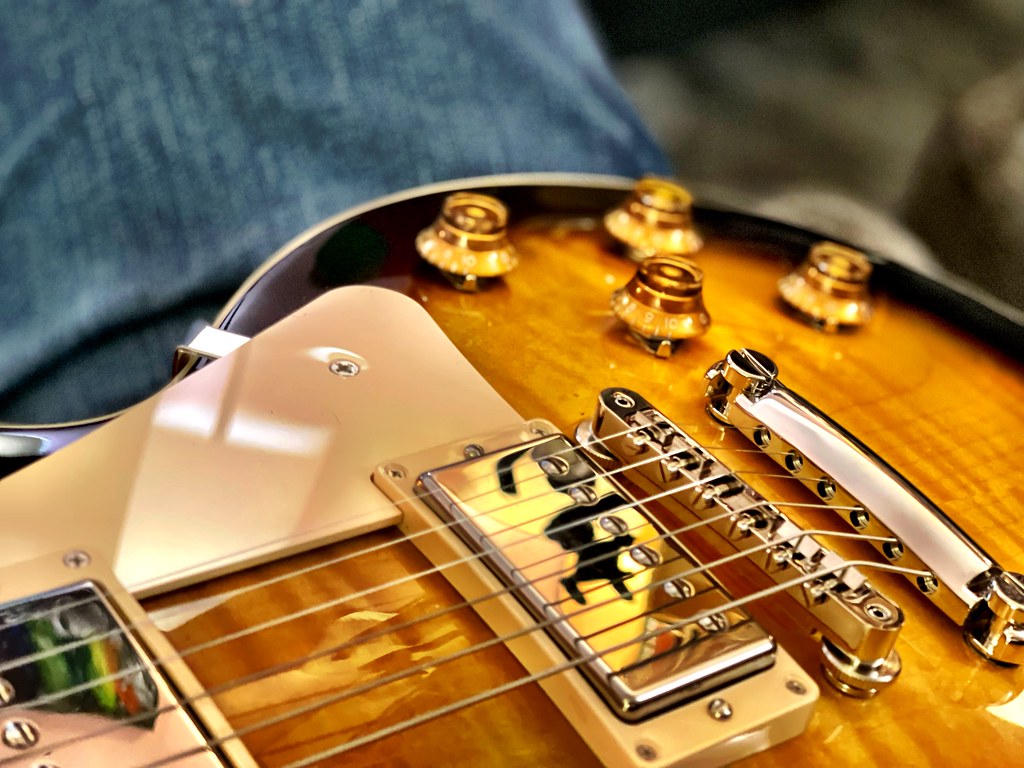 The back is a different color than my ‘78 Custom. I like the lighter shade this has. 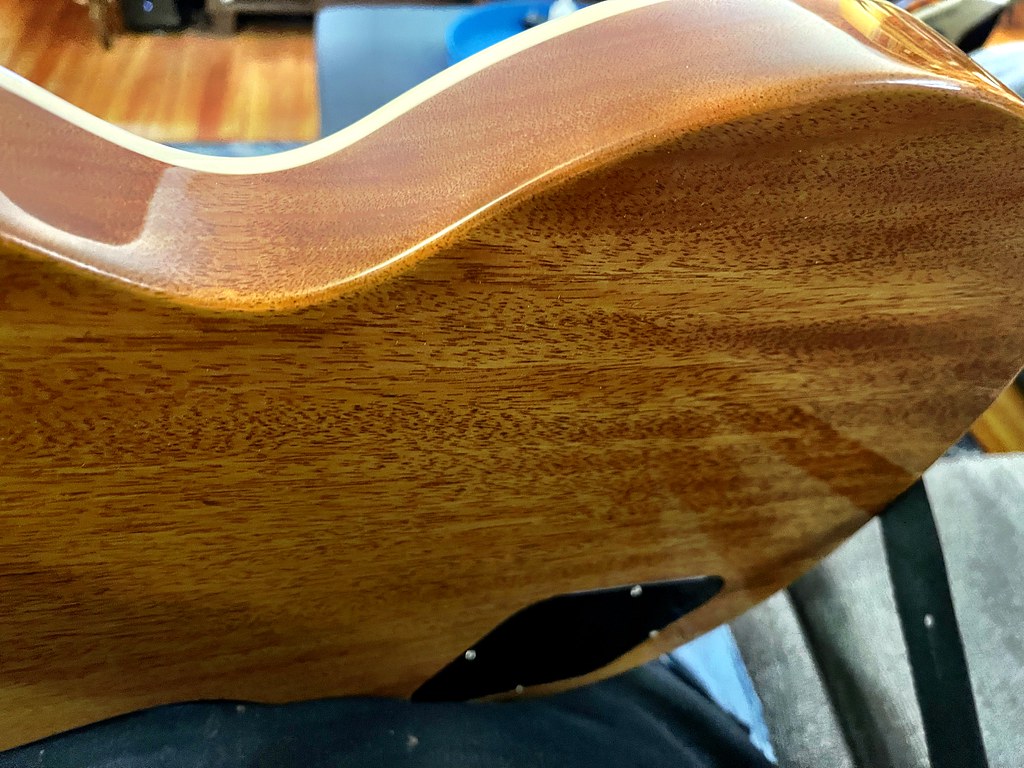 I adore the 50’s style tuning pegs. I think my much missed Deluxe had those. My Custom didn’t (I changed the tuners on the Custom in 2006, I think, and I have no clue if the ones we took off were original or not. 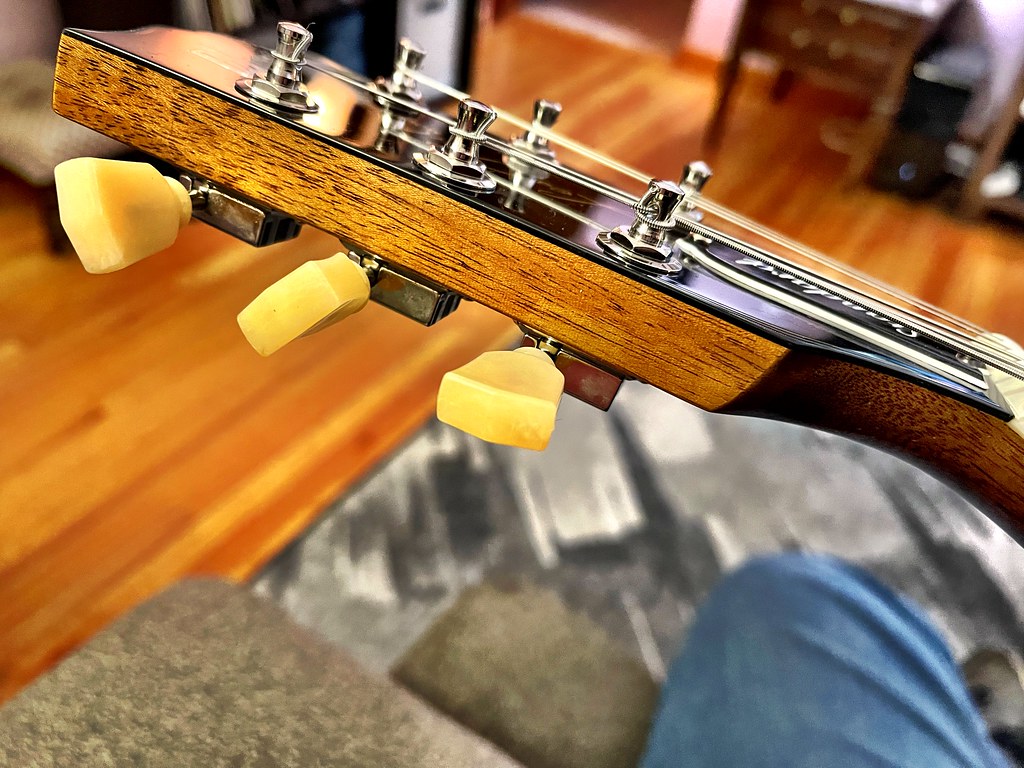 I’m happy to see the poker chip. My SG came with one but it wasn’t installed. I haven’t put it on because it’s a royal pain in the ass to do. 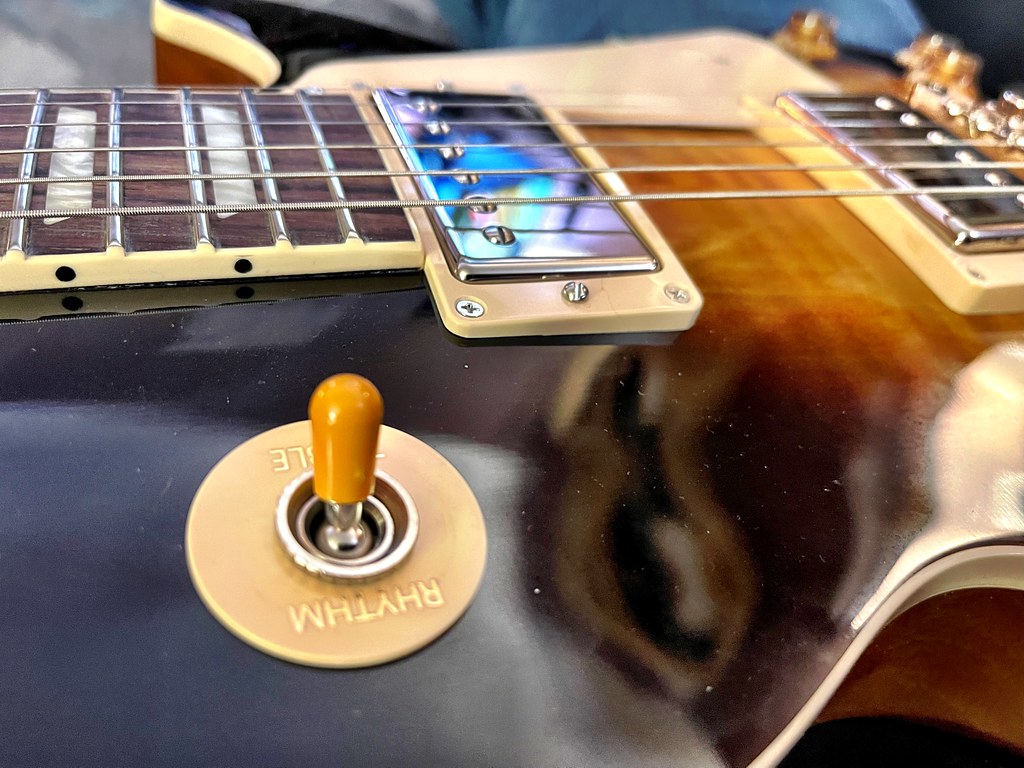 You can’t see it in the picture (I tried and failed) but it’s definitely a two piece cap. My eyes could clearly see where they join. 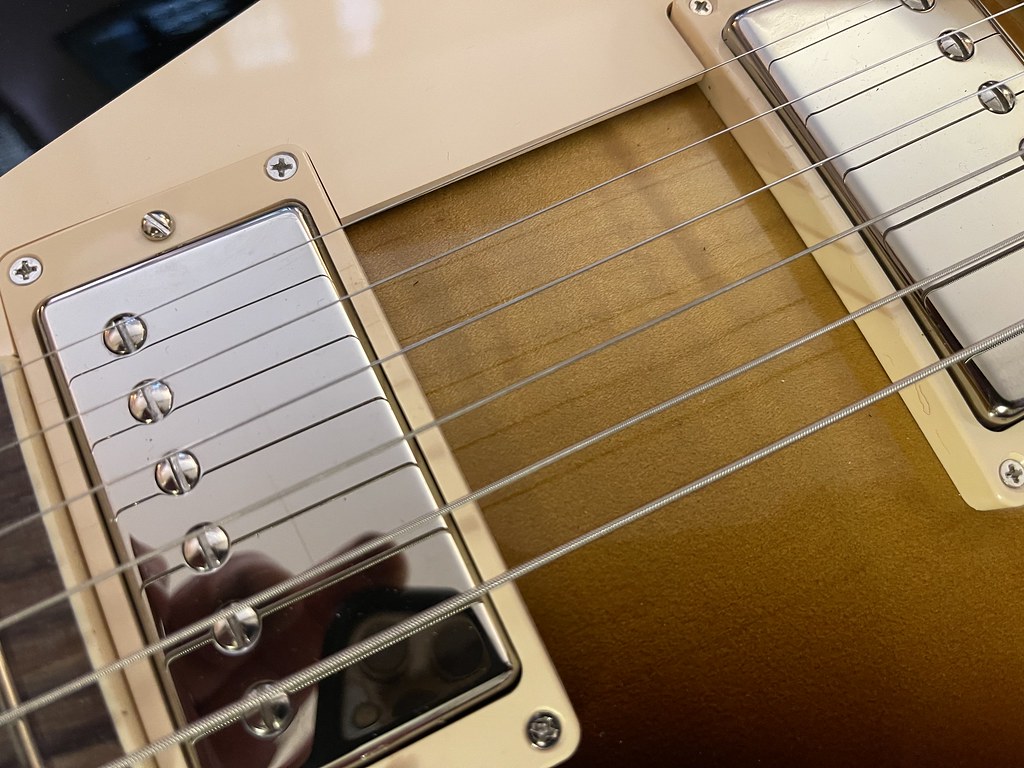 Like I said, I have a new best friend. What a killer birthday present, right?

There was a run on this picture on Flickr today, for some reason. This will probably go down in history as my last gig. It was Break Even’s reunion, put on by Steve the guitar player. Tim the guitar player, who Steve and I replaced, came back for the fun. All three of us played Les Pauls. Mine is the custom with the black pick guard on the left. Tim’s is the Black one leaning on the amp. Steve’s is the standard with the white pick guard and the awesome trapezoid inlays on the right.

Waves
Long exposures at Salisbury Beach this morning. (30, 15, and 2.5 seconds if I remember correctly)
Took this with my DSLR in manual mode like a crazy person.
Dude! You’re in my chair!
Mrrow.
Growing things.