Somewhere in this cellar storage nightmare is a little, purple, cheap, vibe pedal. There’s also a foot switch for one of my amps, and an isolated 9volt plug that I can use with guitar pedals. 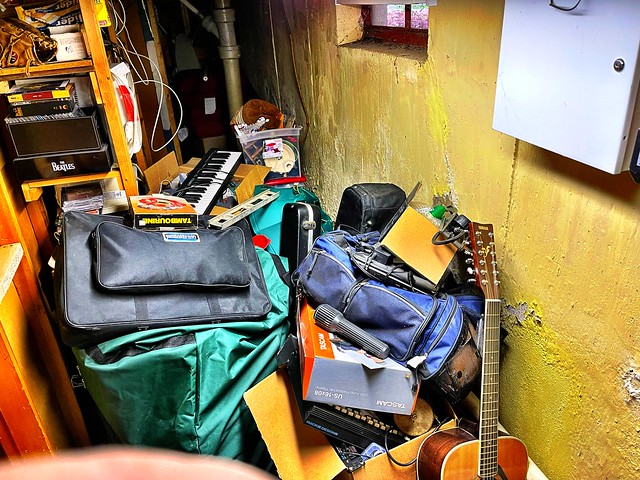 I went in there looking for the little, purple, vibe pedal. If I found the other two things, that would be nice, but I wanted the vibe pedal.

I found the other two things.

One week ago I gave the details on the very ugly HVAC situation in our cellar. It’s one of many ugly situations in our cellar, but for now it’s the one that’s being worked on.

They looked over the ducts in the cellar and said they needed to come back another day to actually fix things. Today is that day. They gave us an estimate and let’s just say I won’t be buying myself a guitar for my 50th birthday… and maybe not for 51-60 either. In the immortal words of Austin Powers, ouch, babie.

Jen sent me a message about an hour ago. They are there. They are working. They are loud. One them wasn’t wearing a mask. Insert very frustrated non-science denying sigh here.

This whole thing has me very nervous. Central air is one of the highlights of our house. I don’t want to de-evolve to a state where we have fans and air conditioners in the windows. I want to be snooty high society with my air conditioned house. I am also very happy that progress is being made as this has been weighing on me like you wouldn’t believe.

If I were to list off the things I’d least like to do on a Monday day off with six feet of snow outside and temperatures in the negatives, I think shop vac’ing up a flooded basement after the washing machine’s outflow popped out of the drain pipe would be very high on the list.

Yup, that was a big part of my morning.

The cellar cleanup recommenced today. So far we’ve got one full trash barrel, one very small, very dead garter snake that looked like it had been there for years, and the spider population has been reduced by six.

I took a picture of a snake in the cellar last night. It was dead. I left it there with the intention of getting rid of it this morning.

There is a snow shovel in the cellar. Why? Because once I found a live garter snake and I used a snow shovel to kill it. Now, so long as the shovel is not needed in the driveway, it stays in the cellar. I grabbed our broom and took it downstairs with the plan to sweep the corpse onto the shovel, dump it into a trash barrel, and then take the barrel outside. I had to walk over to the other end of the cellar to get the shovel. As I was heading over to the laundry area, where last night’s dead sucker was decaying, I walked behind the couch.

There was another one.

Was it dead? I don’t know. It wasn’t moving. What do I do? I reached out with the broom and poked it. It was alive all right. It took off for a hiding place, but I used the broom to sweep it back out into the open, where I bashed it with the shovel. SLAM! It wasn’t all the way dead, but it was broken enough that it didn’t matter. Sweep sweep, scoop scoop, it’s in the trash. Sweep sweep, scoop scoop, last night’s bastard was in the trash.

Now I’m paranoid. I went wandering around, looking for more of the little s.o.b’s. Turns out there was this thing that I thought was a twisty tie (the cat LOVES to play with twisty ties) in a corner that turned out to be another dead one. I first saw it a couple of days ago but didn’t think anything of it. Sweep sweep, scoop scoop, carry the barrel outside and deposit three little home invaders.

I should also add that last weekend while I was mowing the grass I happened to see one slithering along the edge of the patio. Garter snakes are easier to kill with a lawn mower than with a shovel, I’ll tell you that for nothing. I left the corpse behind, figuring some animal would make use of it. The next day I took a look and it was gone.

I’m going to assume that it was the screwy weather last night that brought two of them into the open. I’m also going to assume that the very, very cold cellar floor will put and end to all of those that do come out of hiding. If not that, then the cat. Those that do show themselves and somehow manage to survive will have to face me and my shovel. From the garter snake’s point of view, I am the angel of death. I am the back breaker. I am the head smasher. I am snakey heaven’s justice.

(if you are a garter snake) Don’t mess with me.

We rented a dumpster for the cellar/garage clean up. It was delivered on Friday. On Saturday morning (after using a crow bar to pry the damn door open) it looked like this: 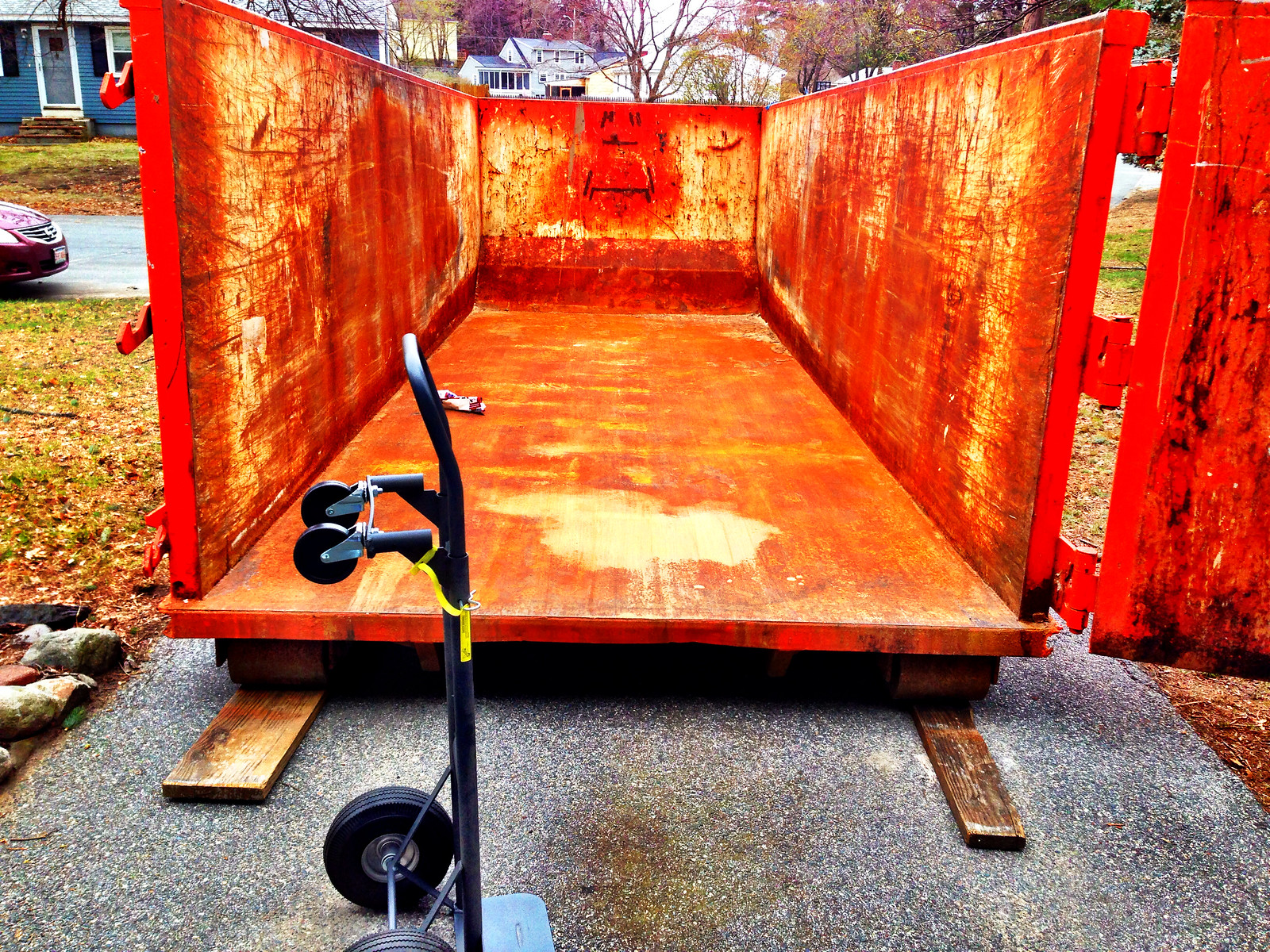 On Saturday evening when my legs and back couldn’t take anymore and the cellar clean up was put on hold for the night it looked like this: 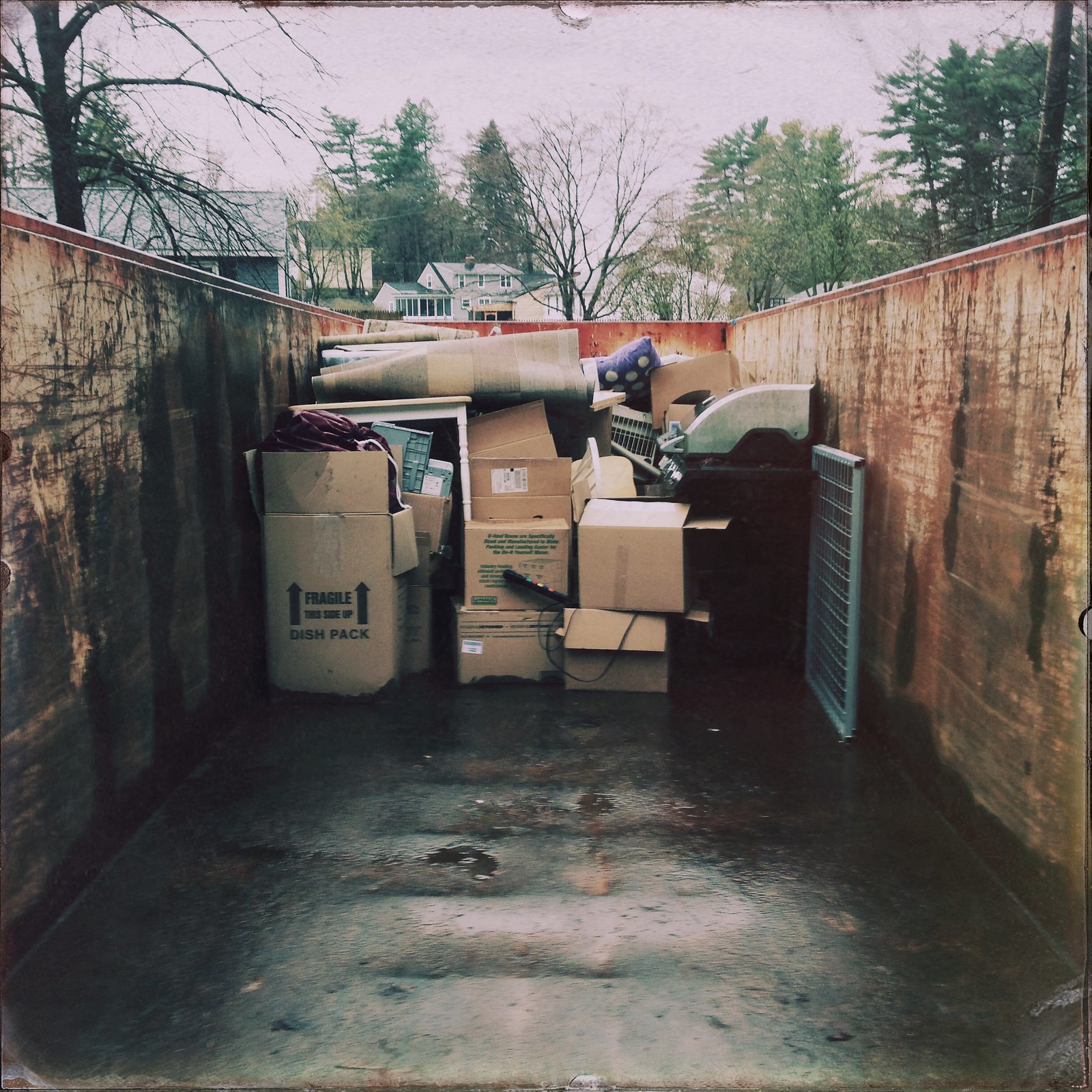 On Sunday afternoon when the cellar and garage were as done as they were going to get, it looked like this: 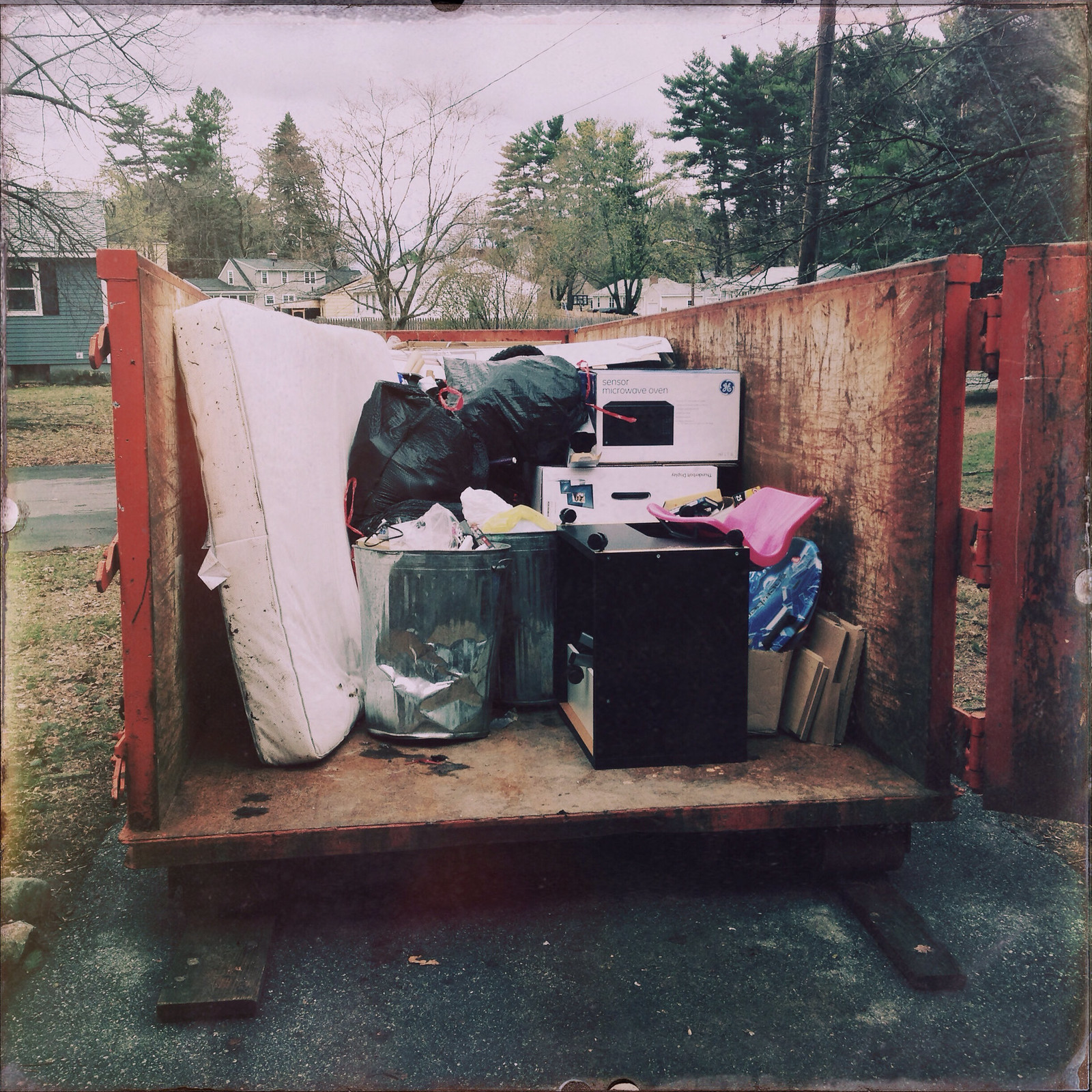 Now that the all of the storage spaces in the cellar are completely empty, the next job is to take all of the stuff that can’t be thrown away but needs to be stored some place and re-fill up all of the cellar storage spaces. After that it will be time to clean the holy hell out of the floors, walls, and ceiling, with a focus on getting rid of the dust and spider webs and making the whole place as unappealing to garter snakes as possible. Then we can look into figuring out why two of the light fixtures don’t work. If turning on the lights actually lights up the whole cellar instead of just part of it, then it will be more appealing for the family to use. There is also the question of getting cable hooked up so Robbie can watch hockey in the cellar while the kids watch on demand in the living room. The Bruins vs Montreal second round series should be starting sometime this week after all.

You know, I didn’t mean to leave the heaviest stuff for the second day. I just forgot about half the junk-o-la we’ve acquired since moving into the duplex in 2008.

The garter snake population has been reduced by one. I knew it was a good idea to leave that snow shovel at the bottom of the stairs. This guy was maybe six inches long, just a toddler perhaps. He was trying to climb the wall right next to the trusty snow shovel. I didn’t even have to get off the stairs to end it’s home invading existence.

Phase One of the Cellar Reclamation Project had been completed.

The nap time comfy couch has been moved from one side of the stairs to the other. The Pre-HDTV has been put in its place. There is no cable box, just a DVD player. The sectional couch that used to be in front of the TV over in the dark, creepy, spidery corner by the bulkhead has also moved along with the TV. It’s now underneath one of the ceiling lights where it is much less creepy.

I haven’t yet decided what Phase Two of the Cellar Reclamation Project will be.