Harry lost his car keys. He took my car to school today. No big deal. He’ll come home today and dig through his room and find them and all will be well. We don’t have a spare to that car. We did, a valet key, but we’re not sure where it is. Purely out of a desire to always have a back up plan that has back up plans, we looked into getting a replacement key. The dealer told us we need to bring the car to them, buy a new key from the parts department, and then have the service department cut it. Expensive, but not the end of the world. Doing the math you’ll find that the difficulty is bringing the car to the dealer when we don’t have a key with which to start the car. They said AAA can tow it to them.

That brings up the next set of questions. We have a AAA account. We also have spent the last 14 months barely using our cars. Did we let the AAA membership lapse due to lack of automotive need? I called them up and told them I just wanted to see if we were active. I gave my name and address, they looked me up. Nope, our account was cancelled. Then I had a thought…

At some point in the past, a couple of years ago maybe, I needed AAA for something and found two different membership cards in my wallet. Same name, different account numbers, different dates, everything. If I remember correctly I called them to see which one was active and found they were somehow both active. I cancelled one of them. Is it possible that on the call today they were looking up the wrong account? I asked what membership number they were looking at and sure enough it was different than the one I was looking at. I gave them my membership and wouldn’t you know it? It’s paid up through September. What do you think of that?

So the moral of the story is, the last day of my forties is kinda being a dick, but at the same time if we need to do this crazy Rube Goldberg-esque key replacement, then we’ve got all of our ducks in a row.

The weekend… what can I do to dip my toe into the waters of normalcy? One of the cars needs an oil change. I can go to Valvoline and have it done without leaving the car. That’s a good option. The other car needs an inspection. I don’t know about that. That seems a little much for the first few days. Maybe next weekend.

There is one thing that is looming over all other things. One thing that, now that Jen got the hybrid inspected (thank you so much, my love!), needs to be done more than anything else…

A hair cut. Woah boy do I need a hair cut.

Back inside the house there will be music. I want to bring the big Bassbreaker amp down cellar and bring up the Vox AC15 and use that on it’s own for a while. I bought it over the summer and I don’t think I’ve used it without a second amp for more than a couple of minutes. April’s music will be through just that amp. At least for a day or two before I change my mind again. I also want to put the 1×12 speaker cabinet back into the living room so Harry can play the electric piano through it. He’s been 100% headphones for long enough. Once all that stuff is done I have to write and record a song for the RPM site’s Record Every Month challenge. It’s month two and that’s way too soon to drop out.

Okay, so that’s Saturday. What about Sunday.

We haven’t worked out the logistics yet… but I think we’re going to see how we feel about a really long drive.

Not so much a stir crazy thing, more of a crazy quarantine related factoid.

There were no other fill ups for either car in the the intervening time. The Mazda still has half a tank left from the March 11th fill up.

My commute from home to the office is about 33 miles or so and usually takes an hour and a half (on average, I think) each way. My wife’s commute is less than that but she often spends an hour each way. The very concept of going three months on a single tank of gas is so far out of the realm of possibility that my mind is having a hard time processing it. I would normally go through a tank every four days in the Mazda. The Kia is a hybrid. The tank is only about 9-10 gallons, but it could usually go 5-6 days without a fill up.

I simply cannot get over it.

That’s okay, I was planning on doing some car music tomorrow morning and I was thinking I’d take the Mazda because it’s been so long.  She said that was a good plan and that was it.

We got a text from my sister in law saying they were in town and they were wondering if we could do a social-distance-driveway-visit.  Yesterday we had a super awesome baking day.  Jen made brownies that are awesome, and I made Tewksbury Tweets because that’s my thing.  Jen suggested putting a plate full of brownies and tweets onto the car at the end of the driveway (the Kia).  Good idea! 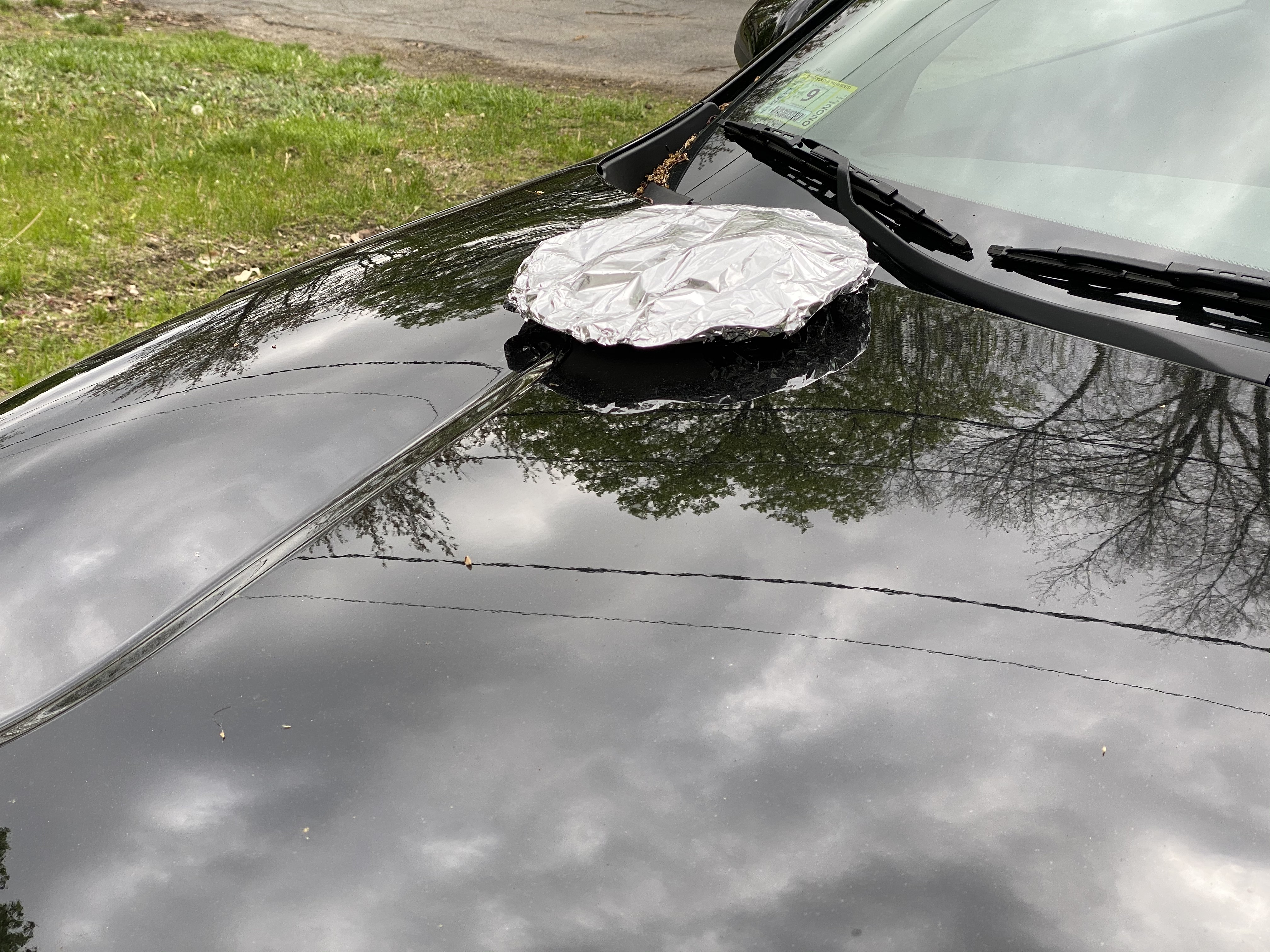 She put the food onto a paper plate, wrapped it in tin foil, and put it on the hood of the car.  Not long after I was looking out the window and saw one of those sonofabitch squirrels eying the plate.  No way, asshole.  I went outside and scared him off.  I figured I’d just hang out on the steps until the gang arrived.  While I was out there I figured why not start the cars?

The Mazda is on the inside, blocked in, closest to the house.  I was a little nervous but I hit that starter and boom, she started right up.  While I was in there I hit the auto start for the Kia and… nothing.  Okay.  I shut off the Mazda, walked back to the Kia, hit the power lock… nothing.  Uh oh.

We used the physical key to get into the car and it was dead, dead, dead.  Stone dead.  Okay, now what.  A few years ago while we were having trouble with our old Nissan I bought a battery charger and an extra set of jumper cables.  Tonight I went down cellar to the area where all the stuff that used to be in the garage now lives and dug around until I found them.

The battery charger intimidates me.  I don’t know why.  I have jumped a zillion cars in my day, why does this bother me?  The jumper cables were a last resort as we would have to move the Mazda onto the grass for them to reach.  The charger was definitely the way to go.  Jen was kind enough to read the instructions and give me a quick tutorial.  I went outside to get things ready.  I popped the hood and…  There isn’t a battery.  At least not one that fits the traditional description.

Now Jen reminded me that she had to have AAA jump the car once before so we know it’s possible to jump start a hybrid.  We just didn’t know how.  There was a box under the hood with a + sign on it.  I opened it up and it was all fuses and wires.  Nothing that looked like a car battery terminal.  I pulled out the manual (by default, an admission of failure) and quickly got frustrated trying to find literally anything.  Off to youtube I went!

I found a video that showed what I needed.  Apparently the positive terminal is in the + box, it just doesn’t look anything like any car battery terminal ever seen by human eyes.  The ground terminal… well that sucker just doesn’t exist.  The video suggested using a bolt that sticks out of the side of the engine block.  I shit you not.

I set everything up, confidently press the start button even though no lights were on inside the car and… nothing.  Shit.  We reset the battery charging thing to charge the battery rather than start the engine and… nothing.

Jen was sitting in the drivers seat and noticed a button called Battery Reset, or something like that.  I looked it up in the manual.  It said, before jump starting your car try pushing this button.  Jen pushed it.  Everything lit up like the forth of July, and when Jen pressed the starter, Boom.  It started right up. 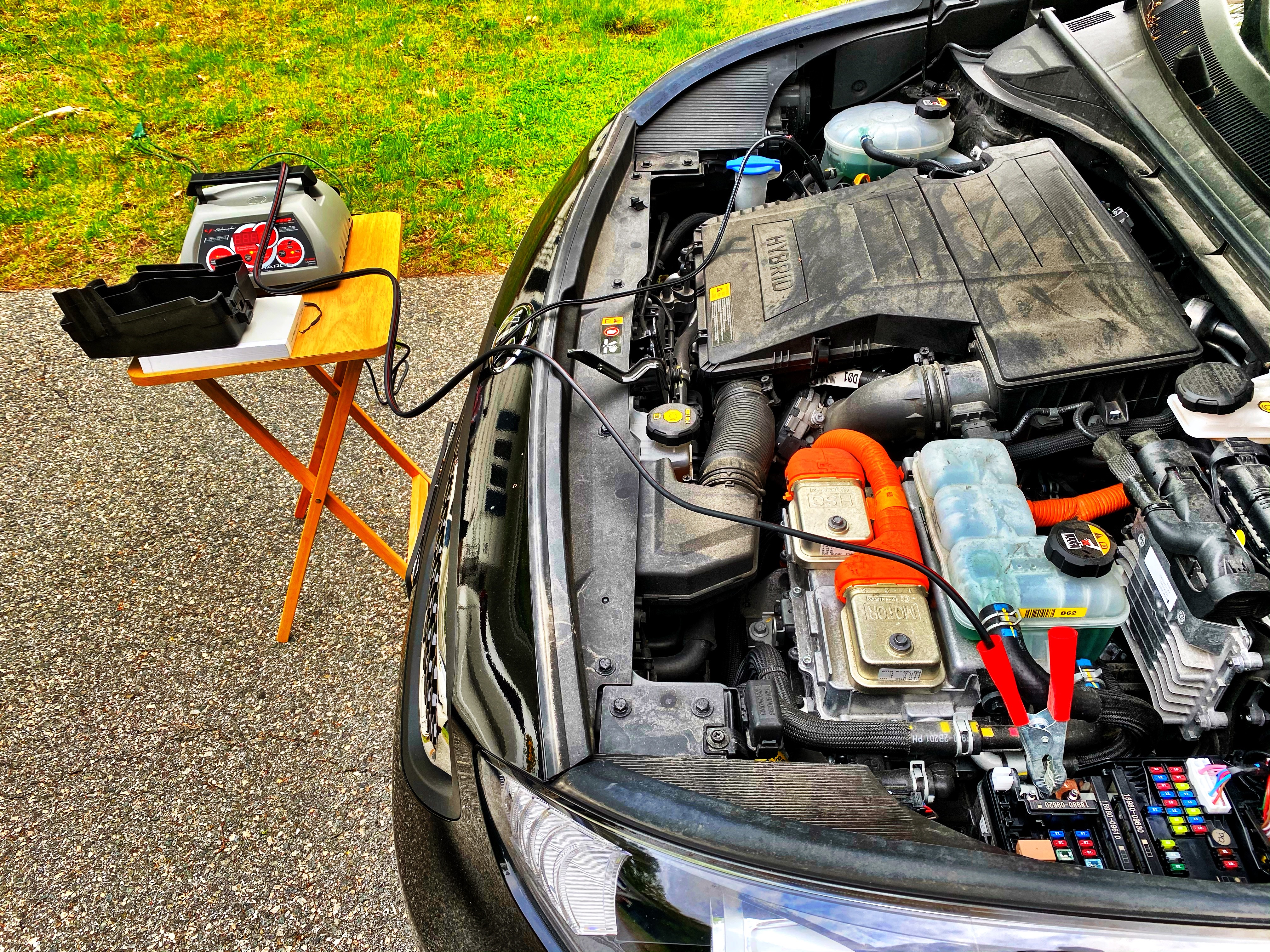 We didn’t need a jump start at all.  Good thing we never called AAA!  Boy would I have been embarrassed.

We let the car run for a few minutes, then broke everything down and brought it inside.  I closed the hood, picked up a homemade COVID-19 Bandanna Mask (patent pending) that my beloved, genius, battery resetting wife made, and drove around town for 15 minutes or so.

When I got home I parked on the street.  If the battery turns itself off again the Mazda won’t be blocked in.  Good idea. 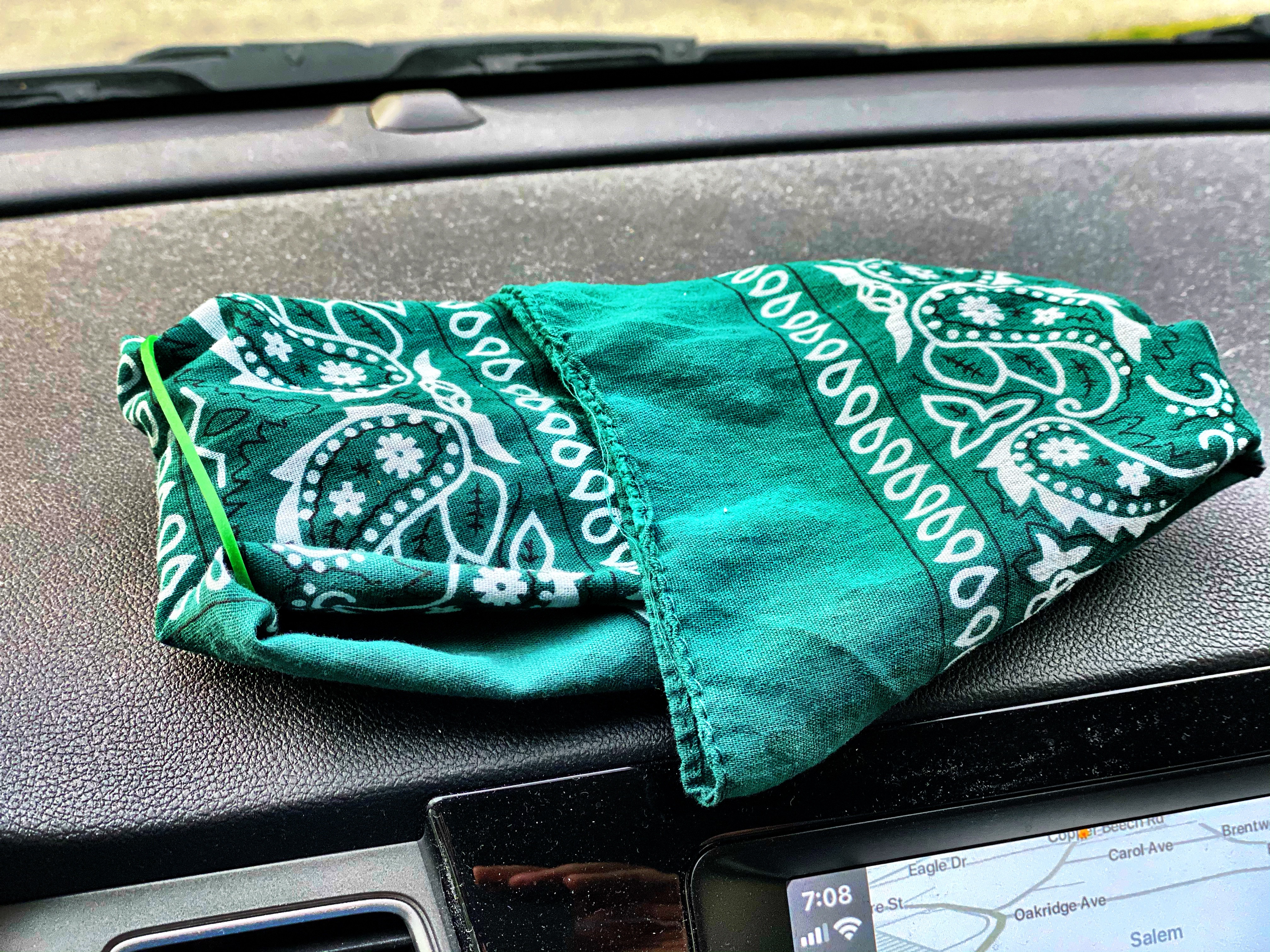 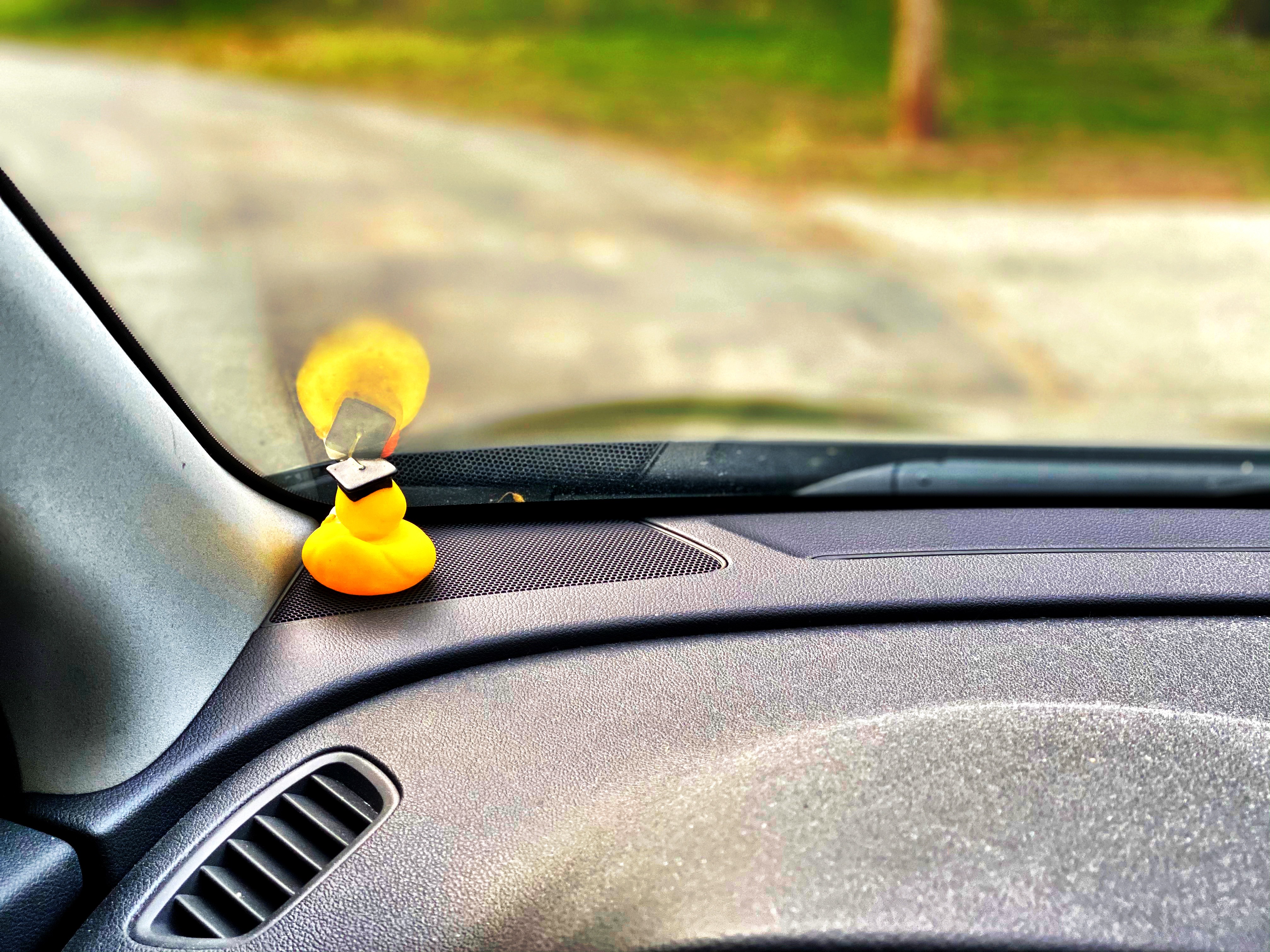 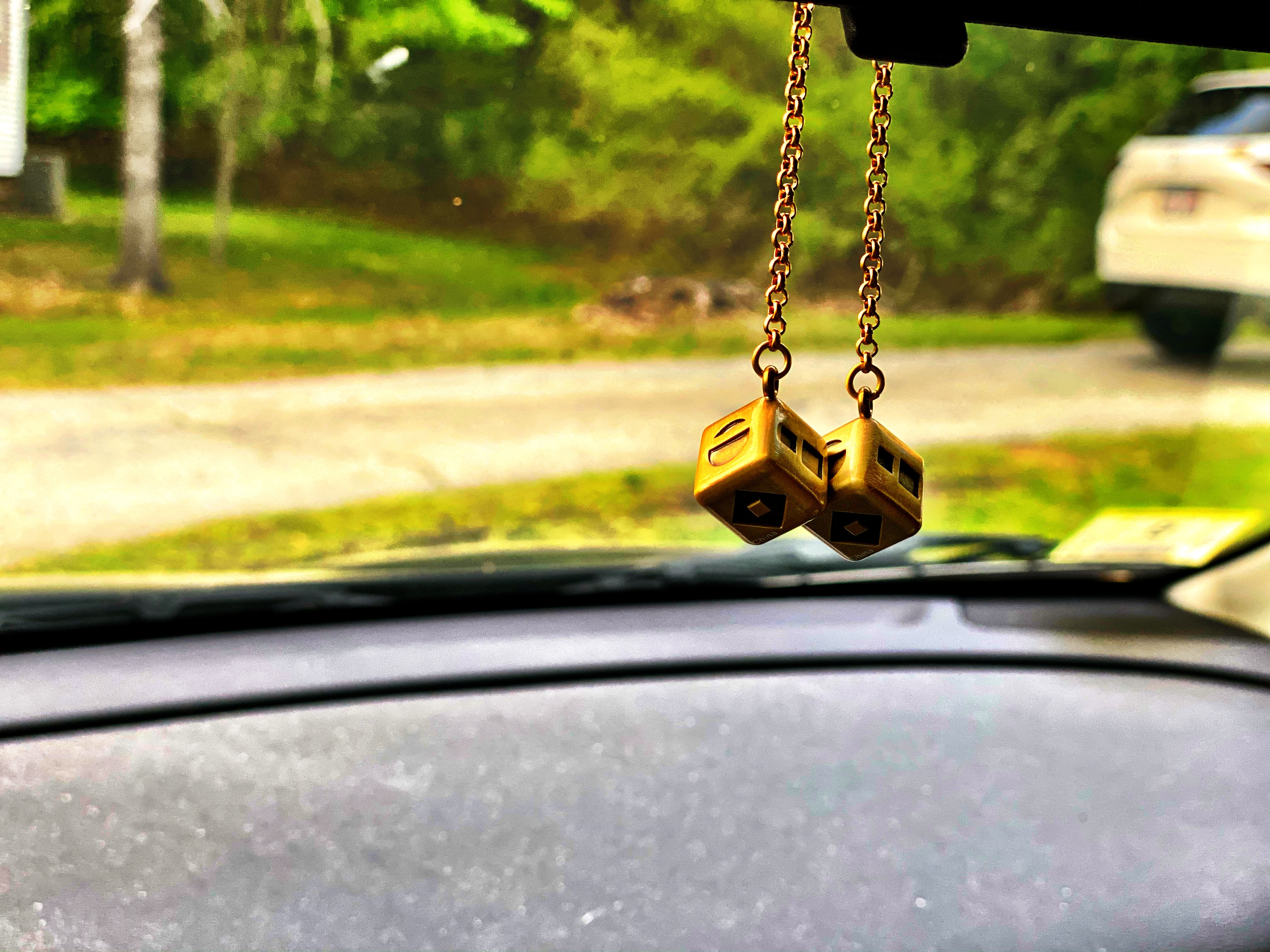 Today is the day that I take care of maintenance on both cars. First stop, Midas to get the breaks and tires on the van checked.

Today has been a movie day at our house.  I ran some errands in the morning, and then the kids and I ran another errand, and then we came home to movie bonanza.

First we started with disc one of The Lord of the Rings – The Two Towers.  We’ll watch the rest tomorrow.  The kids said they wanted a movie watching break after the first disc so they went and did other things.  I took advantage of the rare moment of being in charge of the television by throwing on the blu ray version of Return of the Jedi.  Within seconds of the flick starting, both kids were glued to the tube with me.

After that my gorgeous, beloved wife declared that after two guy films she was taking over and picking a super chick flick.  She and my step daughter stayed in the living room and watched Beaches (OMG!) while my step son and I went down cellar and watched The Incredibles.

Pixar has never made a bad movie, have they?  I don’t think so, but every time I watch The Incredibles it gets better and better.  That movie just plain rules all animated movies.  It’s the best, really.  I want an Incredibles 2.  How could they have made Cars 2, but not The Incredibles 2?  Cars was a great movie, but it’s not fit to fold The Incredible’s underwear.  Really.