I was able to get up early and get ready for work quick enough to have about 30-40 minutes worth of pre-commuting music time.  All of the vocals are done, so there’s only fun stuff left to do.  I decided I would start the work week by tackling some saxophone.  I still had three songs to work on.  I picked one and it was off to the races.

I cheated when I set all of this up.  Standard tuning on a guitar puts the open fifth string at 440 hertz (roughly) which is commonly referred to as the note A.  Most wind instruments do not follow the same convention.  In order to better allow the notes the instruments can play to show up on a standard sheet music staff, the reference pitches are shifted a bit.  A trumpet or a tenor sax take that A at 440 hertz and call it B.  For an Alto Sax that note is called an F# (F sharp) or Gb (flat).  All this made life very confusing to the fifth grade kid learning to play the alto sax.  When the teacher said to play a Bb concert, I played a G.  What the hell?  Why do those lucky stiff flute players get to play a Bb?

When tuned to standard pitch (A = 440 hertz), which is also referred to as concert pitch as hinted above, the lowest note you can play on a guitar is an E.  That’s the lowest, sixth, string played open.  Because of this, a huge percentage of the rock and the roll music is in the key of E.  A song in the key of E concert is in C# on an alto sax.  Changing keys on a guitar is easy, you just play the same patterns in a different place on the neck.  Changing key on a wind instrument is the bitch to end all bitches, and C# is pretty much the bitchiest of them all.  To combat this bitchy problem, I tuned the guitar so that 440 hertz is an A#/Bb.  That allows me to pretend I’m playing in E but the actual sound produced is in Eb, which also allows me to play the alto sax in the key of C.  Any kid playing a piano knows that C is as simple as it gets.  Now, having said all of this I was generally writing in a minor key and C# minor isn’t really the end of the world, and C minor is only a little bit easier, but I still have oodles of life experience soloing on a C minor pentatonic scale and it’s pretty much my favorite place to be.

I also wrote a couple of songs in A minor, tuned down to Ab minor, which is F minor on the alto and that’s a bit of a pain in the ass, but I just dealt with it.  I could have tuned up a half step on that one to put the key into Bb which would be G on the sax and that would be fine, but enough’s enough.

You know what?  I might be off on all of this discussion by a factor of two.  Is the open fifth string A the one that’s at 440 hertz, or is it the second fret on the third string?  One is 440 and the other is either 880 or 220 (can you figure out the physical relationship between octaves from that?).  I can’t remember which is which.  Similar to the wind instruments, a guitar’s pitch is shifted for the purpose of readability too, but in the guitar’s case the shift is one octave so an A is still called an A.  It’s just a different A.  I don’t remember if the shift puts 440 up to the third string or down to the fifth.  Whatever.  Let’s just take it as written and if I am wrong you can take my heartfelt apology and kiss my ginormous ass.

So the first song I messed with this morning, file name RPM 2020 06 iPad, was in the key of E minor, turned down a half step to Eb minor, which let me play in my favorite key for soloing on the alto, C minor.  Amen, brothers and sisters.  I had left space for two solos, both eight measure long, as well as some additional little fill in noodling during the choruses.  I picked off the first solo after 3-4 takes and picked off the second solo in two takes.  The noodles didn’t take long either.  Hey man, Robbie’s on a roll!  Waze on my iPhone was running the whole time and my estimated time of arrival at the office was still only 8:20.  I had been playing for something like 15-20 minutes and I could likely keep playing for 15-20 more.

Now I’ve mentioned this on my wittle bloggy a few times before, but there are physical limits to how long you can play a musical instrument.  At some point your body just refuses to continue.  On the guitar that can mean your fingers don’t form the chord shapes anymore, or you are unable to bend the strings.  On the saxophone it means your jaw ceases to be able to control the mouth piece as it should.  You combat this fatigue point by practicing your ass off.  The more you practice, the longer you can play before fatigue stops you.  It’s like any other physical activity, it takes practice and exercise.

I have played the alto saxophone for maybe 45-60 minutes total since the last time I played it on an RPM project back in 2013.  I’ve probably played saxophone for a total of maybe two hours since the mid-90’s… if that.  Suffice to say, I am massively, hugely, hilariously out of playing shape.  In my previous two sax playing sessions this month I did not hit the wall.  Today, I totally did.

The second song I worked on this morning, file name 10 Mac, is a goofy little 12 bar blues.  The first phrase (12 measures long… get it?) is free of vocals and I was planning on doing some noodling there.  I set up a loop for those 12 measures and hit play, intending to practice a run through or two before hitting record.  Instead of soloing over the changes, I found myself playing along with the guitar part.  I liked it.  That would be a cool way to intro the song, have the sax playing along with the guitar instead of improvising over it.  Nice!  I stopped the loop and hit record.

Over the course of the take there were a few notes that were kinda squawked.  They didn’t sound good.  Let’s do another take.  This time there were a couple of notes where I failed to hold the pitch.  On the sax it is possible to press the keys to form a note and then actually produce a note an octave higher.  When you do it on purpose you call that playing an overtone.  When you don’t do it on purpose you call it sounding like dog shit.  I was sounding like dog shit.  Each take was worse than the one before.  I was struggling to produce notes on the low end of the horn.

It has been so long since I’ve played the sax that I didn’t realize what was happening.  My body was revolting against me.  I did another take but instead of listening, I focused on what I was doing.  My teeth were coming off the top of the mouth piece.  My jaw was relaxing when I attacked the notes.  Yup, the ol’ chops were dying on me.  For the first time during this sax playing experiment I had officially pushed myself too far.  It’s now about six hours later and I can still feel it in my jaw.  It just feels wrong.  It doesn’t hurt or anything, it just feels off.

So I was only able to pick off one of the three remaining sax parts today.  I am going to the gym after work, and then cooking dinner for my beautiful bride.  After that, I might try again.  I want the sax parts to be out of the way so I can rip through the last guitar parts and then start mixing in earnest.  If I have problems tonight I’ll put it off until Thursday and record some of the guitars first.  No biggie. 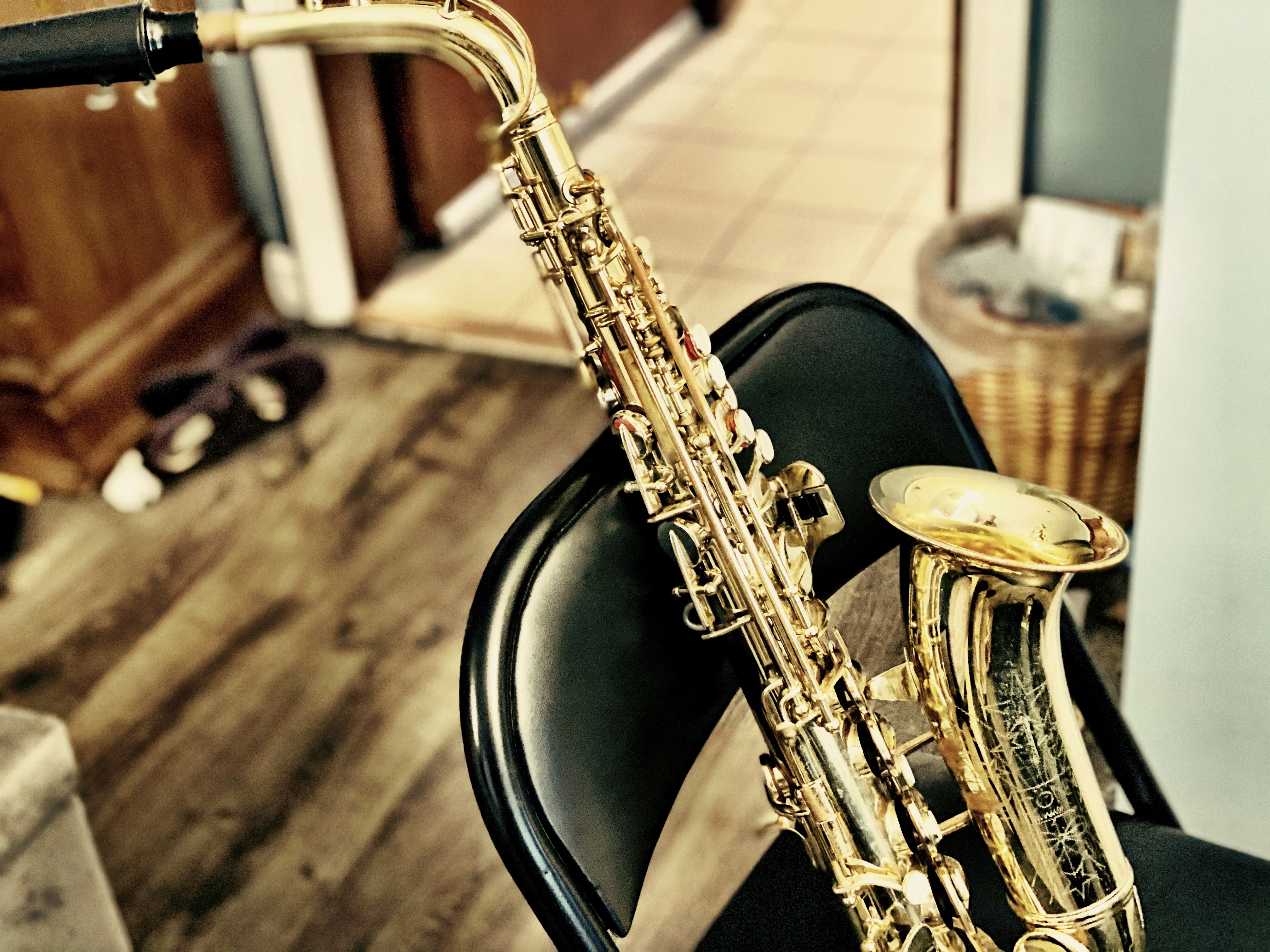