First, I mixed a song. It was the 26th song for 50/90 overall, but it was also the 10th song written and recorded entirely within the month of August. That means for the seventh month in a row I have completed an RPM Challenge rules, album in a month in 29 days. That is insane.

After that I arranged two sets of ideas, just bass and drums, into something that passes for a song form.

I still want to kick off at least three more ideas before August ends. I want to be at least at 40 songs by the end of the month and I’m at 37 now.

Next up is dinner, and then probably a memorial viewing of Black Panther. Then I’ll try to mix another song.

She always sits in the exact spot to maximize being in my way. She has some weird sixth sense.

I mixed three songs tonight. 50/90 is up to 24 complete, and the August album in a month is up to eight.

This one isn’t too bad. I know I use the gimmick of having the instruments come in one at a time but I’m old, what can you do?

Quarantine Tunes Volume 1 is done. I haven’t settled on a running order yet, but here is what I have right now. Might swap the first two songs, or swap one and six.

I did two rhythm guitar parts for 50/90 today. One was the one I did a couple of days ago that was too fast for me. I slowed the tempo and re-recorded the part. The other song was the only song in the pipeline that I hadn’t gotten to yet. There are only six songs. That’s not enough on day seven.

I also did one of the two remaining re-recording project songs. I don’t think I purposely saved the two hard songs for last, but it looks like it ended up that way. The one that’s done isn’t very good. The other one was only just started but I scrapped the little bit I did and will go back to it after taking a break.

Hard songs are hard to play.

If the kids on the playground ever ask you if you can write a metal song in 3/4 time, play them this song.

I mean, the answer is no… but this is in the ballpark I guess, if you squint a little… maybe.

So many music projects!

50/90 started yesterday. I haven’t done a lot, but I have worked on it. I started a file with a couple of bass riffs yesterday, then first thing this morning I started another one, and then during one of my back-resting-lawn-mowing breaks I stared a third. Nothing special, and nothing really there to work with yet, but tiny progress has been made.

As for the re-recording project. There is one song that isn’t exactly re-recorded. When I added it to the project last year I took the original GarageBand file from the 2014 50/90 and just started redoing some of the tracks. The two MIDI instruments, the drums and bass, were actually still the same as the original recording. Today changed the drummer. I still need to re-record the bass. I also just put lead guitar onto that song and one other.

The cool thing about these two takes are that I am back to using two amplifiers. The 15 watt Fender Bassbreaker and the 15 watt Vox AC15 are both working together now. This was literally the reason I wanted to buy the AC15. It sounded pretty good to me.

Unfortunately, playing these lead parts set off whatever it is that is wrong with my left hand. Arthritis? Something like that. It hurt a lot and I had to take a break. When I came back I felt like it had slowed me down a little. Usually when that happens I just stomp on the wah and start strumming a lot. Rock and Roll, eh?

Still pretty shocked that it all works. 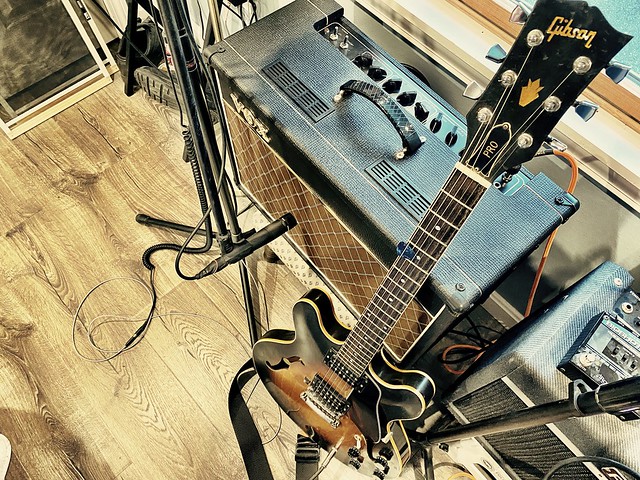 I’ve got this window of time after finishing June’s music but before 50/90 starts and I’m filling it with The Great 2015 Re-Recording Project. This morning before work, for the second day in a row I did car vocals.

I went to the same strip mall but parked in a different spot. I was closer to the road and closer to the building, but much further away from all of yesterday’s distractions.

As was alluded to in the previous post, I tried to work out which of the remaining six songs I wanted to work on today. I was gunning for two but secretly hoping for three (he says secretly… as if there was some James Bond secret agent shit going on here instead of a dumb fat ass yelling at a microphone. Could he BE any douchier?). I picked my two and headed out.

For a second I thought about listening to the scratch vocal tracks and typing them out. Then I thought, screw that and moved on to the next song. I blew through it pretty quick and then picked another song. The melody was easy, but it’s very shouty. Much shoutier than I usually do. I finished it reasonably quickly and then figured I’d pack up.

I still had time. I still had laptop battery charge. Most importantly, I still had room in my bladder (more often than not car vocal sessions end due to having to pee. Welcome to the magic factory, kids). What the hell, I could do one more. Is there something left that doesn’t have a lot of harmony tracks or overlapping goofiness? There’s one… it’s really shouty though. Maybe the shoutiest song I’ve ever come up with. Can I do it? I’m already pretty tired from the last one.

My mind thought back to The Beatles recording their first album, Please Please Me. They saved Twist and Shout for last because John Lennon wasn’t feeling well and they knew if he screamed his way though that song he’d have nothing left for anything else.

I got three songs worth of vocals done today. That makes five in total. Quarantine Tunes Volume 1 will have eight songs. Only three more to go.

Yes, on the other side of the freight containers is a crane…. at the mall…. why?