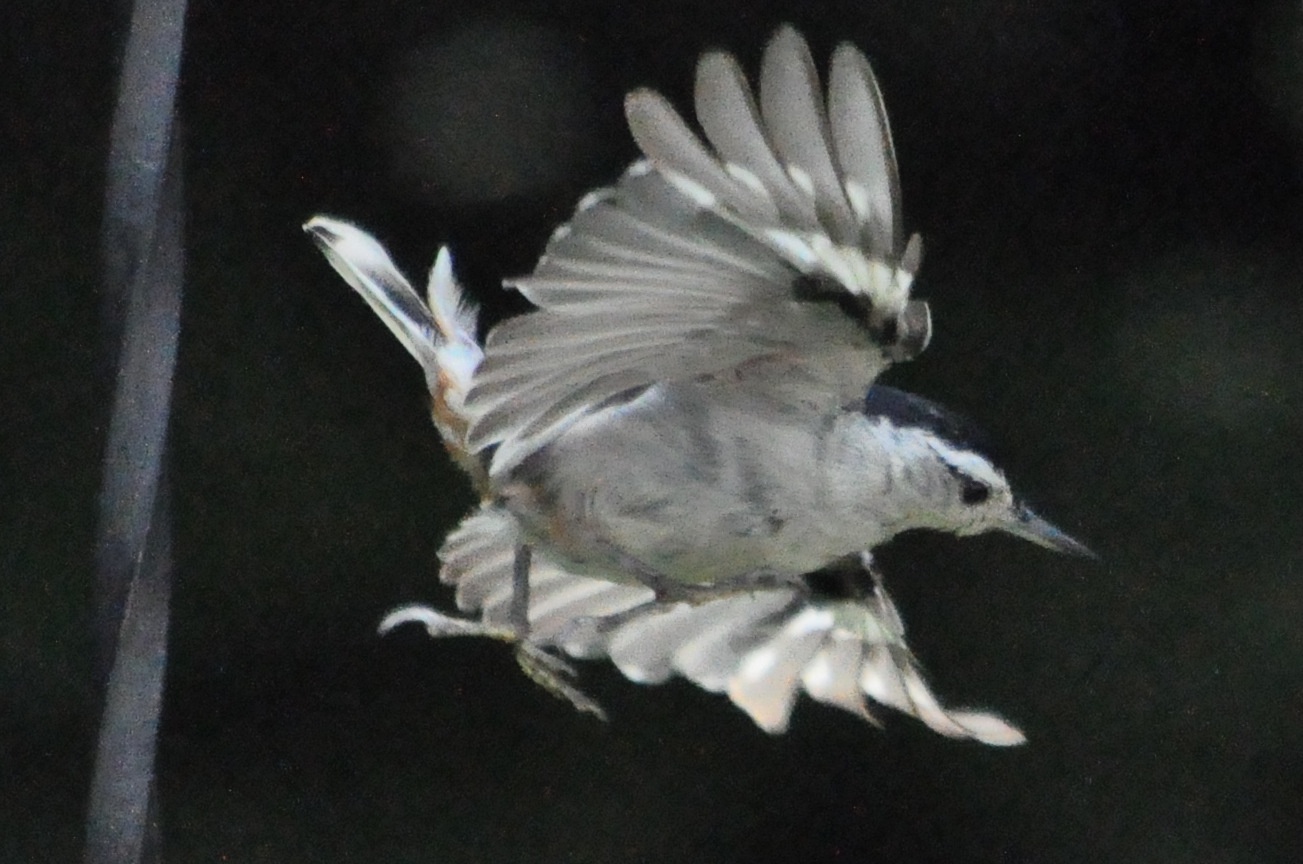 I want to make changes to the bird feeder situation this year. I’m thinking of looking into getting a much taller pole to hang it from so that the deer can’t reach it, and to put a squirrel baffle thingie on it to at least slow those bastards down a little. If it happens, there will be pictures. Lots of them.

I am working from home today. When lunch time came I decided I’d cook the last hamburger out on the grill. A little cookout for one, if you will.

In one hand I had a plate with the burger on it along with a couple of grill utensils. In the other I had a little tray table I use to place all my stuff on while I grill like a grilling demon wannabe.

I put the tray table down while I opened the garage’s back door. Immediately upon opening the door a dragon fly blew past. Good! I’ve been hoping to see those little buggers. Dragon flies eat mosquitoes and we sure could handle a drastic reduction in the back yard mosquito population. Welcome back, dragon fly!

As I took my first step toward the open door I saw something even better. Probably only 20-30 yards away, flying slowly, almost casually, across the far end of the yard was a great big honkin’ red tail hawk. Right there, as large as life (literally). It landed on a low branch of a tree near the edge of the woods. It sat there for a second, just long enough for me to get a good look and for him to notice there was a great big two legged sucker walking out of the building. It took off into the woods and I quickly lost sight of it.

As I grilled up my lunch, I kept an eye on the trees and on the sky. I saw a big butterfly, and a bluejay, but that was it. I told myself that if the hawk came back into the yard I was going to give it my burger.

Maybe if I feed it, it will start killing off the damn squirrels that eat all of my bird food.

I had two separate bird sightings this week that are just the kind of thing to make your total nerd boy of a narrator want to run to wordpress.

This morning I was getting ready for work when I heard the gobble gobble of a turkey coming from behind the house. My step son was in the next room. I asked him if he heard it too but he didn’t. It was still dark out at that point. Half an hour later, with the sun coming up, I looked out the back window and could see a family of turkeys pretty far back in the trees. I had the kids look and they saw them too. One of them was doing that thing where they fan out their tail feathers. That sucker was HUGE. Mammoth! Gigantic. It was big enough to be Thanksgiving dinner for the whole neighborhood. I thought it was really cool. The kids were less impressed.

Still, as far as bird sightings go, that was nothing. Nothing, I say. I saw something else on Wednesday that was so awesome I can’t believe I forgot to write about it.

I was driving North on route 3 on the way home from work. There is a weird junction of highways in Chelmsford that I have to take each day. In order to go from route 3 North to route 495 North you have to take the Lowell Connector for a mile or so. Maybe less. As you exit onto the Connector there is a field to your right. It’s not big. There are some houses on the other side of it. Sometimes it looks like it floods, and there is a little pond. Right now that little pond is frozen over. (well, at least it was on Wednesday evening) As I was taking the exit something over there caught my eye. It went behind some trees as I changed roads and I lost it. Then it cleared again and I could see it. It was only for about a second and a half, but there was no doubt what it was.

It was a bird. A really, really big bird. It had brown feathers on its body and white feathers on its head. Oh yeah, USA, it was the bird that symbolizes our nation. It was a bald freakin’ eagle.

This isn’t a case of Robbie thinking it might have been something but he isn’t 100% sure. No. This was totally and without question a bald eagle. It was HUGE! It was just standing there in the middle of that frozen flood/pond area just off to the right of the junction between route 3 and the Lowell Connector. If I could have doubled back to get a better look I would have, but I was on the highway with no outlet. If I could have caught one of those asshole squirrels in my back yard and fed it to the eagle I would have, but alas I was lacking a squirrel trap.

I know there are bald eagles in the bird sanctuary in Methuen, and I once sat in awe as I watched one flying low over the Merrimack river in Lawrence. My new goal in life is to get a picture of one of these suckers. That would be cool.

It’s tough to take pics of the birds in the yard when the sun isn’t exactly up, but when the cardinals show up you have to try it.

I forgot that I got a decent pic of a cardinal yesterday. I missed my chance to get one of the wood pecker though.

Check it out. I was taking a pic of the birds on the bird feeder and Ms Doe a Deer photo bombed. What a ham!

I just shoveled the end of the driveway. Pardon me a minute while I die of exhaustion…

The yard is most definitely a winter wonderland today. I saw three deer playing in the snow in the woods. Of course, they may have been bouncing around because the snow was too deep for them to walk. That would mean they weren’t exactly playing, but possibly struggling for survival. Still, they looked like they were playing.

I’ve seen two of my favorite back yard wilderness birds today. Cardinals and woodpeckers. All we need now is an owl and a red tailed hawk and the day will be a jackpot all around.

Apart from the horrors of the snow removal, of course. I’m going to take a fist full of aspirin now. Talk to you all later.

I’ve always wondered about this. Do we have any owls living in the back yard wild kingdom? There are a couple of hawks, some woodpeckers, and some other cool looking birds too. I’ve never seen an owl though. I know they live in this part of Massachusetts, I’ve just never seen one in our woods.

I’m pretty sure I just heard one though.

While mowing the lawn, the birds stayed away. As soon as I ran out of gas and the noise stopped the came flocking out again.

Look at that little squirrel S.O.B. stalking up from the background.