I wanted two things for my desk setup in Harry’s room. I wanted something to sit my headset on and I wanted a clock that I could see if I happen to not be sitting at the computer. I found super cheap-o’s on the Amazon. They came today.

The stand works, but the screws in the base don’t tighten all the way so the whole thing feels like it’s going to collapse at any moment.

The clock is a nice looking little thingie. I picked it because it was cheap and because I didn’t see anything in the listing that mentions an alarm. I don’t want an alarm clock. I was in a meeting at 1:00 when the alarm I didn’t realize I set went off. I found the button to shut it off, but will it go off again in the middle of the night? I’m guessing that’s a yes, cap’n.

When Harry comes home and I move back to my bedroom desk they will come with me. Until then… do your jobs, new guys.

15 minutes to go until I log out of my work computer. I’ve been logged in since about 4:00pm on Saturday and it’s 5:16pm on Monday. Well… I was out for a bit as I rebooted once this morning. I figured the lappy needed it after all the work I made it do this weekend. Have you tried turning it off and on again?

I took tomorrow off to recover from the weekend. What should I do? Besides sleeping of course. Well there was mystery*… no, that’s not right. How about well there is music. I need to do car music. I have eight songs that need singing. Actually, I have 11 songs that need singing. I added two new song ideas to the list yesterday in a very not successful attempt to calm my ass down. There is also one little music memo thing that I added to the song list but it’s not very good so I will probably drop it. So…. eight songs ready for vocal tracks, two songs that still need to have their vocal parts written. Maybe car music in the morning and then more car music in the afternoon? Is that possible?

What else? Well there’s my desk. I have made the (likely temporary) decision to keep my work day desk setup in Harry’s room, but move my MacBook back to the desk in our bedroom. I like it better in our bedroom, but I have also found I really like working elsewhere. It was starting to feel like I never left that room. Now I will definitely be leaving it for 8.5 hours a day, five days per week.

Okay, work time is up. Time to go cook dinner for my love.

*There is a song by Bill Bruford’s fusion band, aptly called Bruford, called Fainting in Coils. It opens up with a quote from Alice and Wonderland where Dr Bruford reads the passage with his voice sent through a harmonizer and lowered an octave or so. There’s some other sauce on there too. Someone else reads some narration and then the good doctor’s voice comes in louder and right up in your face and the first thing he says is, “well, there was mystery.” In my massively sleep deprived state, that’s what I was thinking of as I was typing that paragraph. There. You’re in the know now.**

**Am I the only doofus who puts footnotes into meaningless blog posts? Yeah, I thought so too.

When I work at my parents house I am sitting at the dining room table using a massive desk setup that belongs to my brother. Three monitors and the switcher that lets you use them with a single USB C plug, wireless keyboard and mouse, and a USB hub. Lots and lots of stuff. I’m using it every time I work here, but I have not contributed anything to the work space.

It survived the trip. I think I am going to leave it here because it’s pretty delicate and I don’t know how many trips back and forth in a backpack it has in it. Still, this little five speed USB sucker is my new favorite desk swag.

I’m at my parents’ house in Tewksbury. About a 17 minute drive from my house. I logged into work about 30 minutes early and now I’m on my lunch break, roughly halfway through the business day.

I have a mask that includes a neck strap. I love it. It’s always there. I never have to stop and think about where I put it the last time I took it off. It was around my neck but not on my face when I logged in to my group’s daily meeting. My staff thought it was a bib. It kinda looks like a bib.

I’ve decided that a three monitor setup might be too much for me. I’m not sold on that yet, but I think that might be the case. At home I have a single monitor but it is gigantic. Hijacking my brother’s workspace, his three monitors definitely have more screen real estate than my single monitor, but not nearly as much as you’d think. I initially put my schedule on the left monitor, my email on the right monitor, and then worked on the middle. In theory that is perfect, but in practice I was missing emails because the screen requires me to actually move my head to see it. I moved the email back to the middle and adjusted the windows I was working on so that I could do it in front. Basically reproducing my single monitor from home. I like this.

My mother came over and talked to me as I was waiting for a meeting to start. I was on Zoom with about 10 other people. They asked me if I was trying to talk to them while I was on mute. Nope, just talking to Mom. I don’t know if she gets the telecommuting concept. She seems to, but maybe she just forgot when I told her I was on a meeting. Later, when I wasn’t on a meeting, she walked over and passed me a note. Okay, maybe she does get it. Cool. Thanks, Mom!

There is one thing that I need that I don’t have today and that is a haircut. Soon, my long, flowing red locks. Soon.

Forgive me, but I am going to reuse a picture I posted yesterday.

Working from home has caused some desk setup questions that I didn’t want to deal with, but I think I finally have.

Prior to social distance I had two laptops on my desk in our home office.  I used my MacBook Pro along with a second monitor for all but the eight hours I was telecommuting on Thursdays.  While telecommuting, I switched to a second laptop, running Windows 10.  I used the same second monitor.  I have a 3-1 adapter that has a USB 2.0, HDMI, and USB C input into a single USB C plug.  I had my USB dock, my monitor, and my power all running into it.  When I switched from Mac to Windows I’d just pull the adapter out of one machine and plug it into the other.  Done.

Once the lockdown started I brought my work PC home from Waltham and used that instead of the Windows laptop.  I couldn’t use the same monitor cable for both machines, and the desktop doesn’t have a USB C port, so I was pulling plugs in and out twice a day.

On top of that, Jen and I are both working from home, both in the same room, and both having to join meetings at the same time.  To deal with this I moved my Windows laptop to our bedroom and jokingly called it the conference room.  At first I was using a dinner tray table as a desk, then I setup one of Jen’s old desks instead, and then Jen brought a monitor, a keyboard, and a mouse out and turned the spot into an actual work station.

Yesterday Jen and I both had meetings scheduled for the better part of the day so I bit the bullet and moved my Waltham desktop into the bedroom and spent the whole day in there.  I was planning to move it back to the office this weekend, but instead I talked it over with Jen and we decided to keep a Windows desk in the bedroom and an Apple desk in the office.

Now I am a two desk crazy person.  Certifiably. 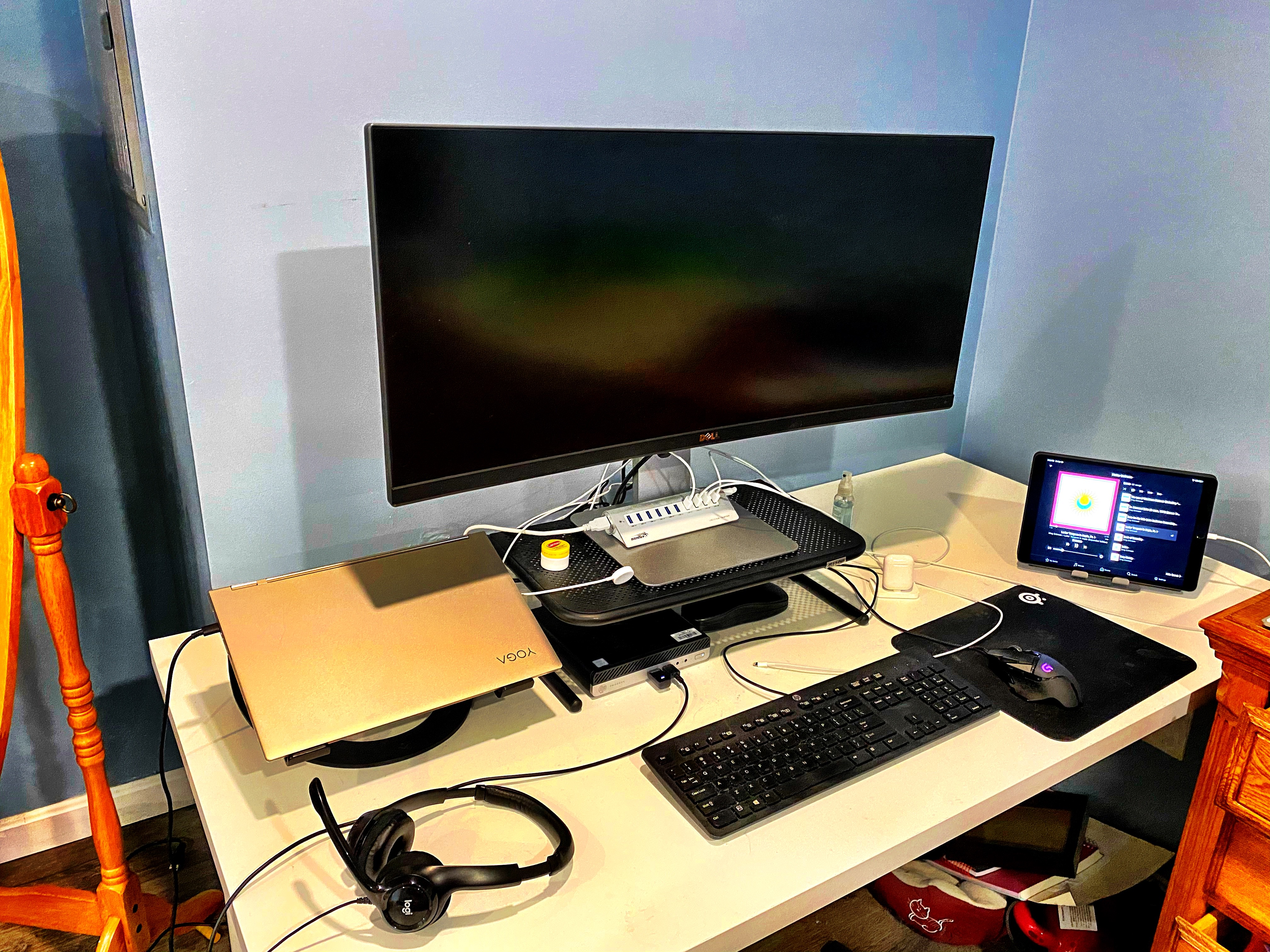 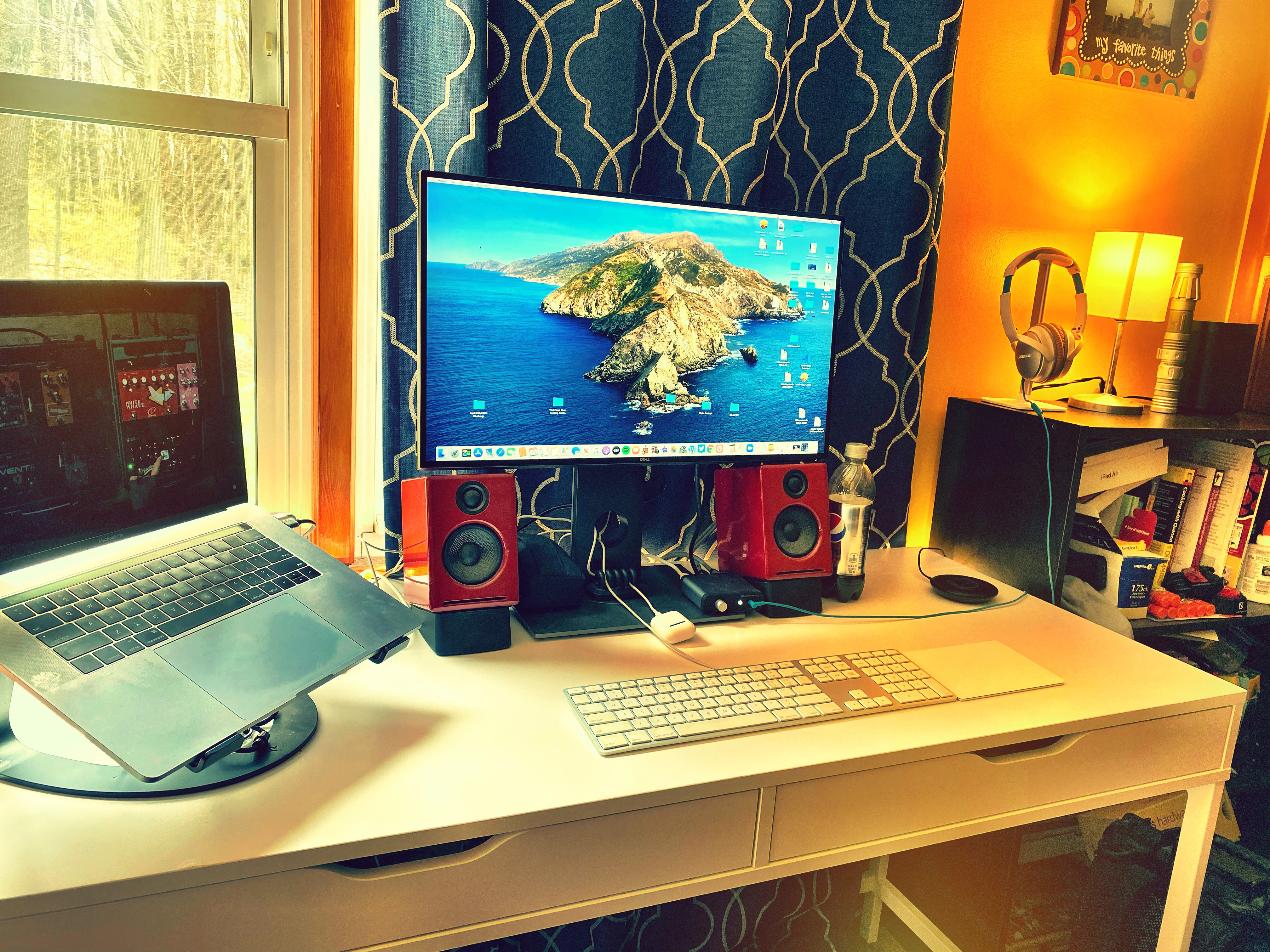 The minute the lock down ends, my Waltham machine goes back to Waltham and I move all my stuff back to the office. This is temporary.