I just want to write a very brief comment on the weather.

Last week, on Thursday I think, the afternoon temperature outside was 72 degrees Fahrenheit.

Today, Monday, at just before noon the temperature outside is 19 degrees Fahrenheit.

New England weather….. Am I right, Sully, or am I right?

We’re getting a minor snow storm today. Forecast is 1-4 inches of heavy, wet snow and as of now the forecast looks correct.

In the year of Covid, it has been a long time since I had to prove my New England Metal by driving in a snow storm. There haven’t been many this season, but with full time telecommuting I haven’t had to drive in any of them. A small part of me has been worried that I might lose my New England membership if I didn’t get out in at least one snow storm and prove I still have what it takes to drive like a maniac* in the worst possible conditions.

Proof has been provided. I drove in the snow today. In the immortal words of Bilbo Baggins, there and back again. Like a New Englander in Wintertime Boss.

*I did not drive like a maniac. Other people did, but not me. I drove like a smart person. Just so ya know.

Wanna know what the worst thing in New England is?

Having to get up before sunrise to shovel.

There wasn’t a lot today, just a couple of inches of very light and fluffy snow. I didn’t clean off the cars, but I did do all the shoveling and it only took half an hour or so. A successful morning, apart from the back pain, but that doesn’t mean it doesn’t suck ass.

Our cat is traumatized. Our new robot pet (DJ*) Roomba kicked off at 3:00 AM again. It woke me up but didn’t keep me up, which is nice, but the cat…. oh the cat doesn’t like (DJ) Roomba at all. We’re not sure why but it kicks off a second time around 5:00 AM and as soon as it woke up Patches dashed into our room and hid under our new bed. The upside is that there is a lot more room for cats to hide under the new bed than there was under the old bed. So Ms Patches has that going for her.

*For those who aren’t in the know…

Backstory: I was reading through some old blog posts the other day, playing This Day in History, and I found one where I had my step son Harry help me shovel the driveway. I made a big deal out of telling him to jump into the shower as soon as he got back inside because it would be the best shower ever. He did, and he agreed with me. Best. Shower. Ever.

Current story: We got a shit load of snow last night and it’s still coming down. I’m guessing there is at least a foot of snow, and the snow bank at the end of the driveway is probably more than double that. I went out this morning to shovel a path from the house to the street for the mailman or any potential delivery folks who might not be getting shut down for the weather. When I finished I came back inside and jumped right into the shower and….

It didn’t work. The magic is gone. I felt just as sore and awful after the shower as I did before. I’m so sad. Maybe it’s because I didn’t do the full driveway, so I didn’t qualify. Maybe it’s because I’m just too old for this shit and it takes more than a roaring hot shower to set me right again. Crud. I am sad. Sad enough that we just booked someone to come and shovel the rest of the snow later tonight. I am fail.

I took a leisurely drive* around the city of Methuen on this fine Sunday morning and snapped a few pics of some of the stone walls and random castle-ish looking things that are all over the place. 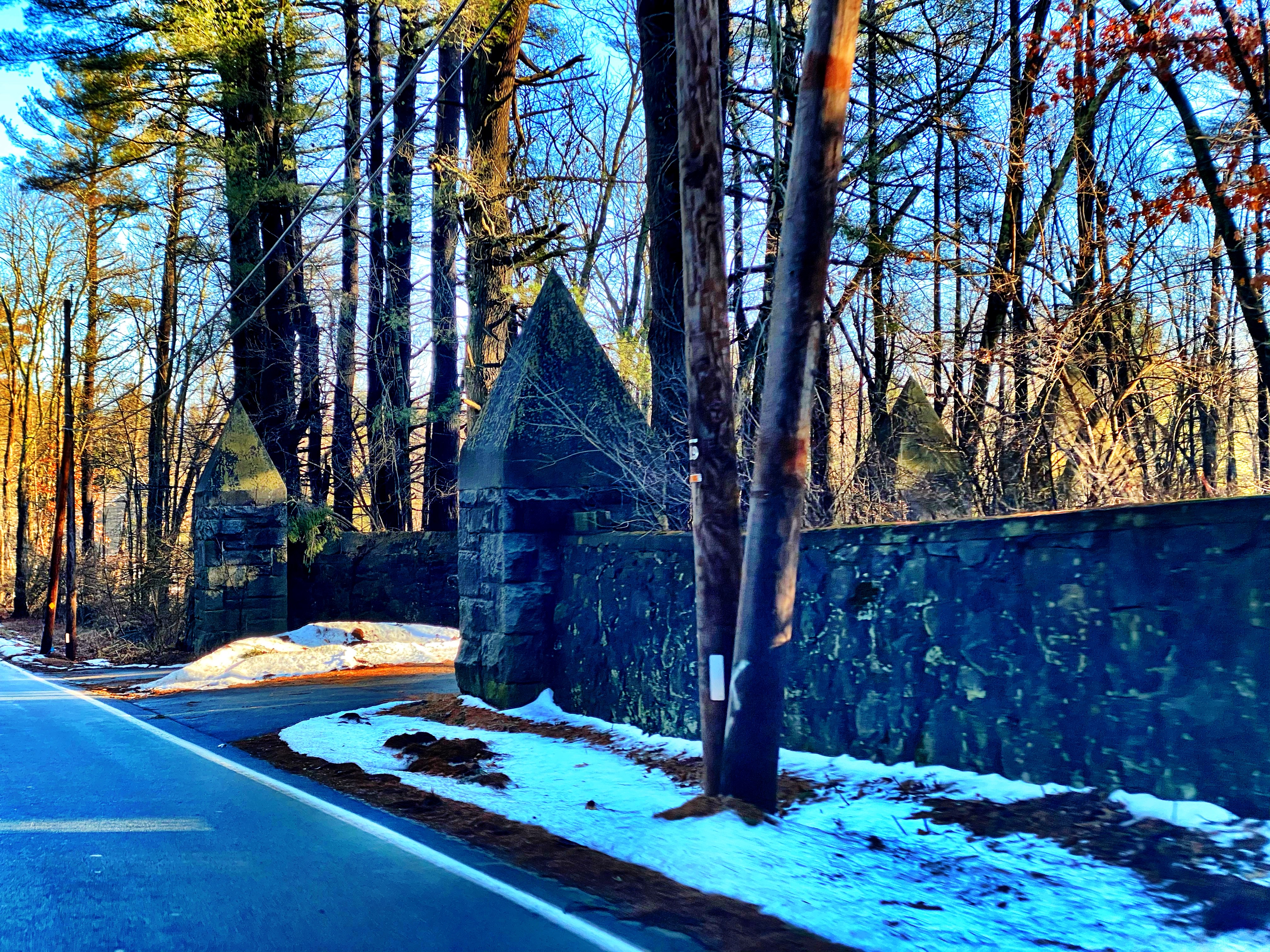 This one is officially my pic for the photo a day thing. 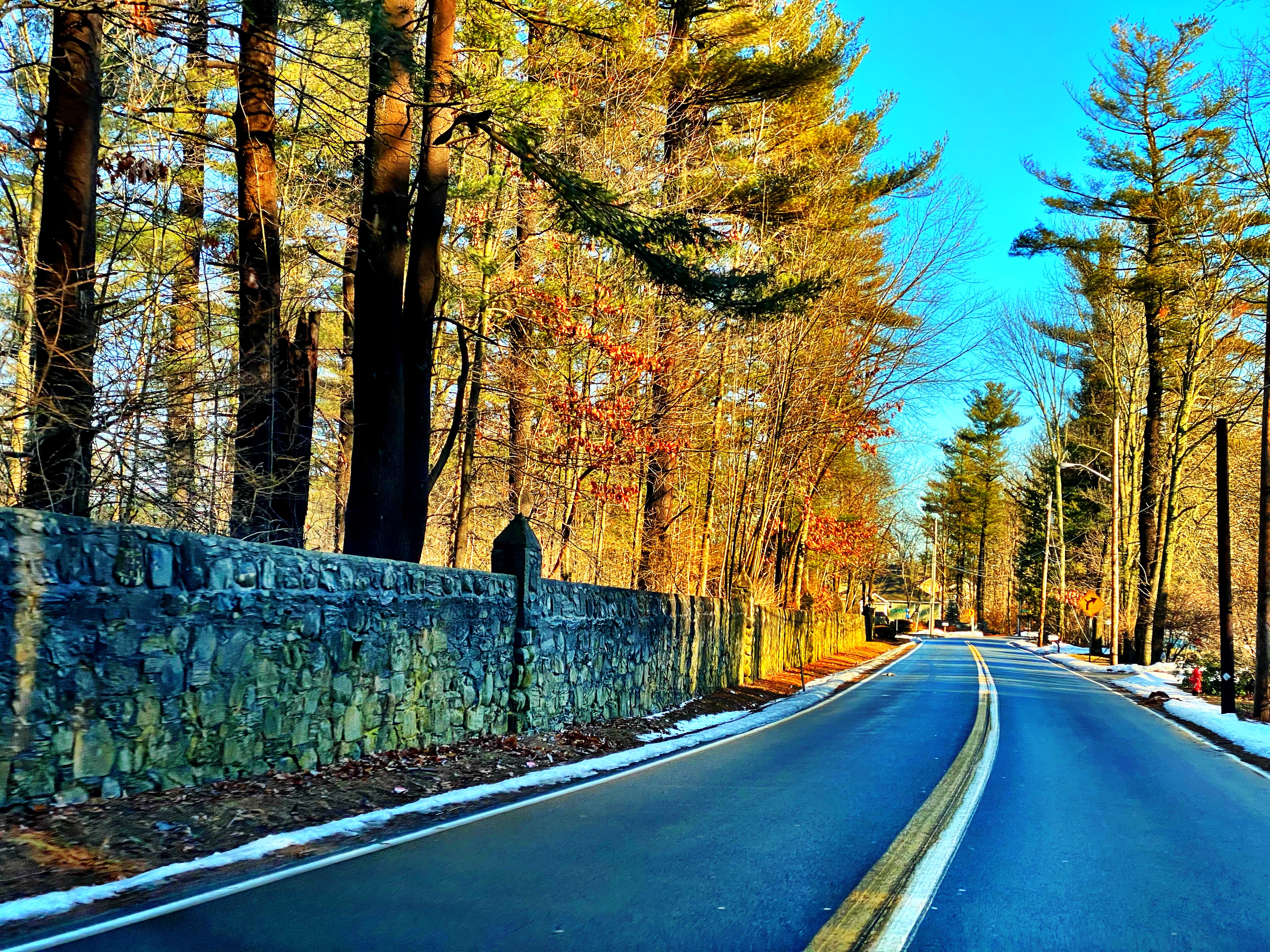 I stopped here once and took some pictures with my D90. I couldn’t find a way into the little building thingie, but it is two stories high. Why is it there? 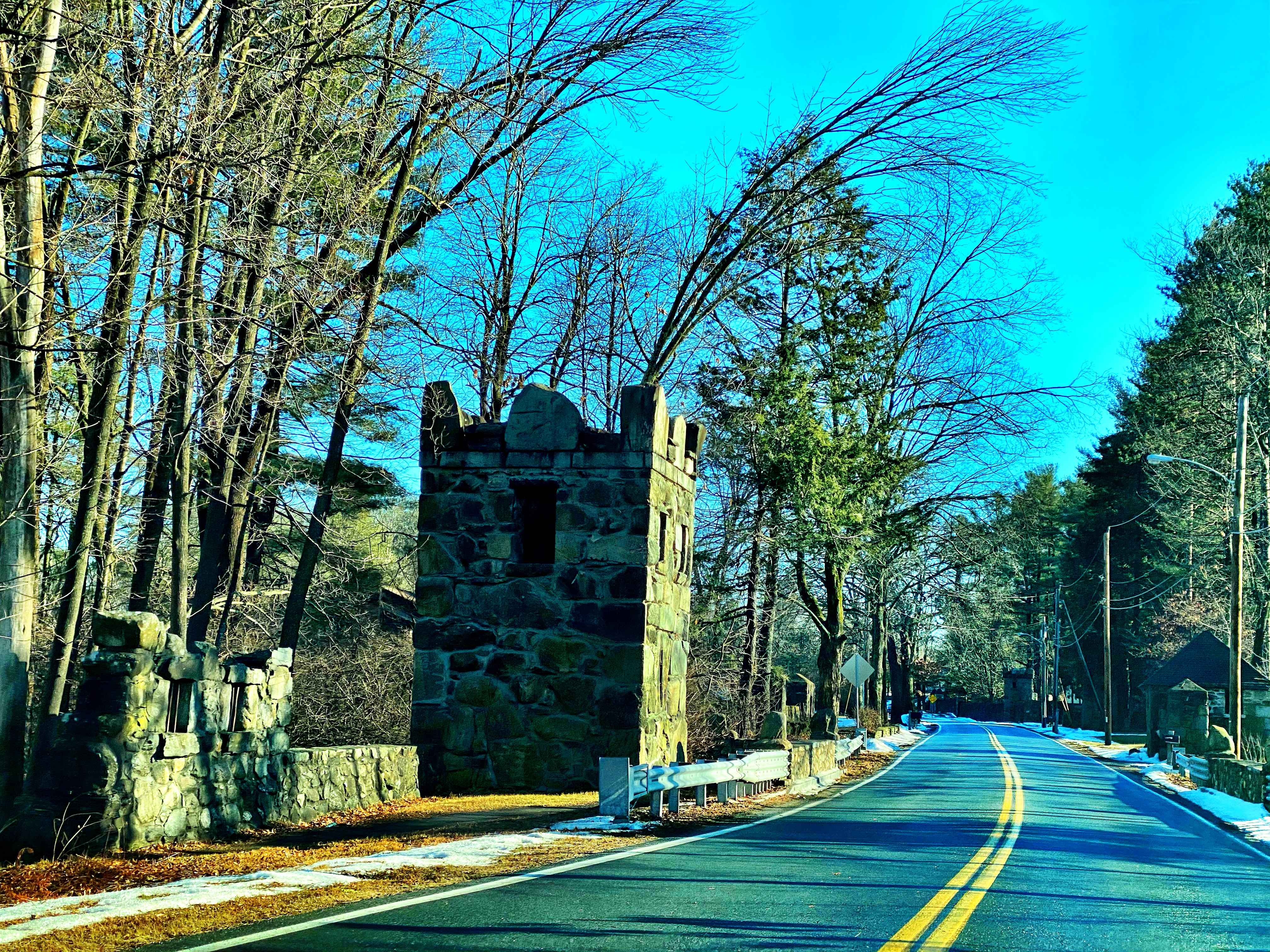 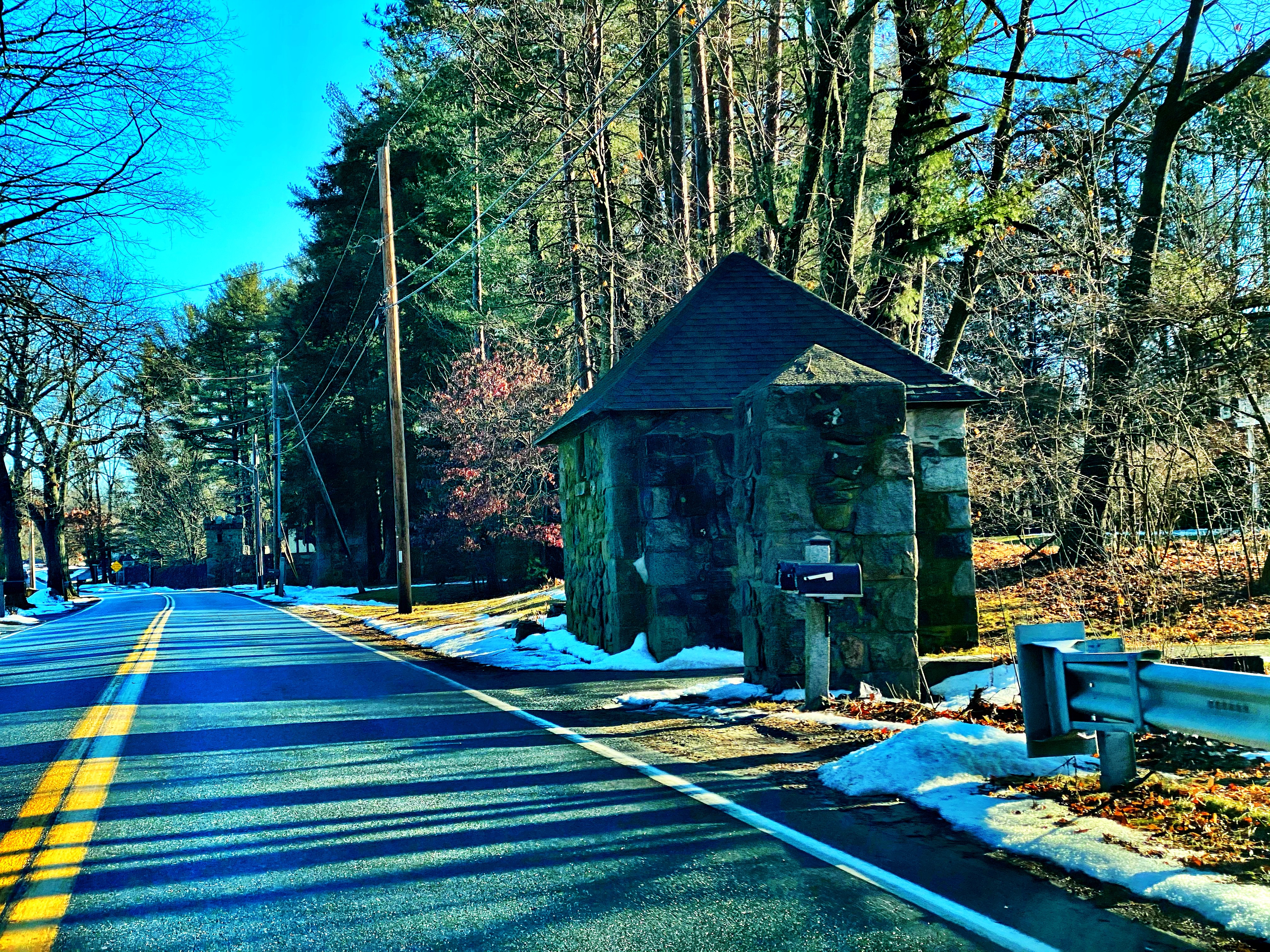 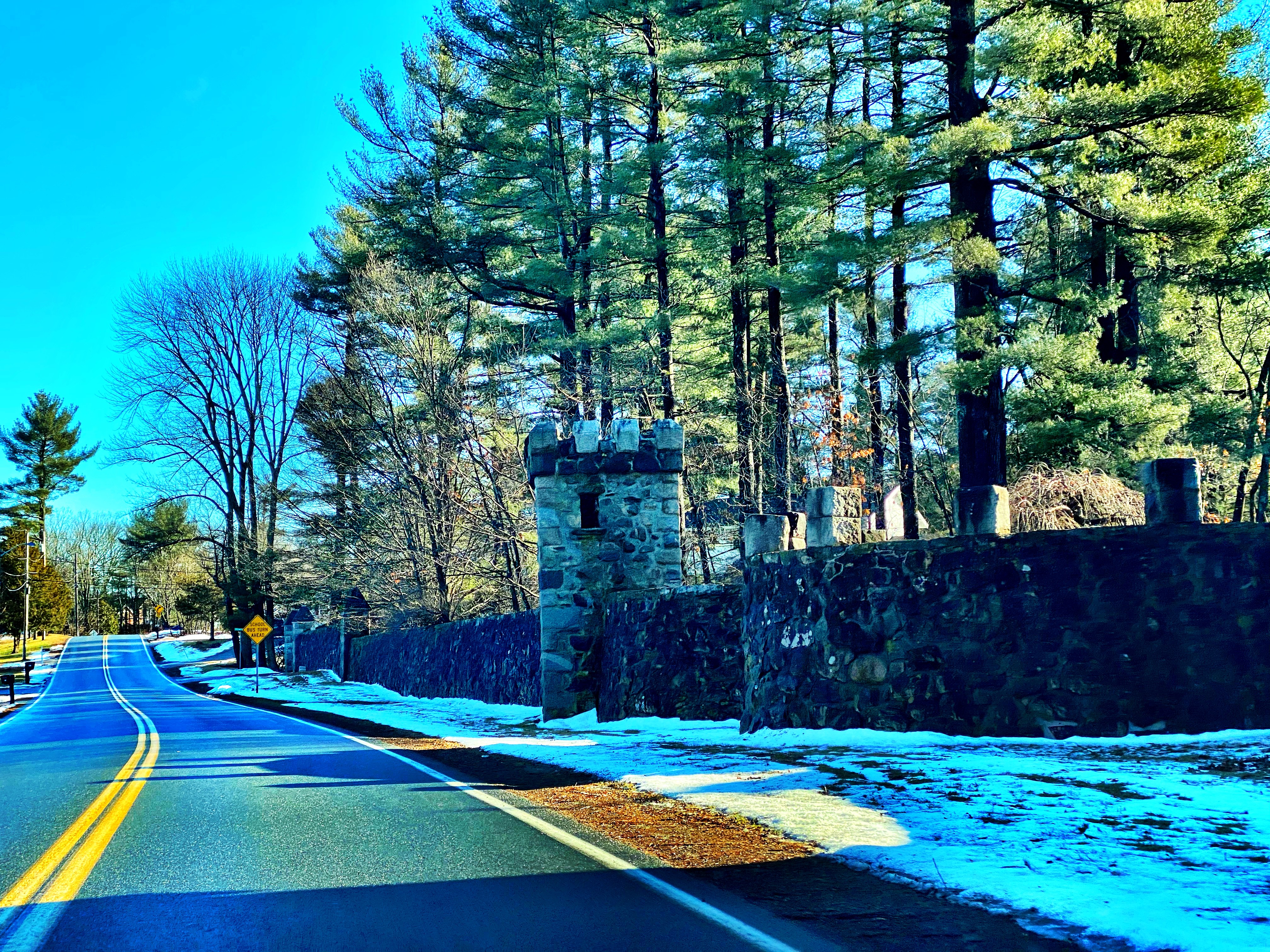 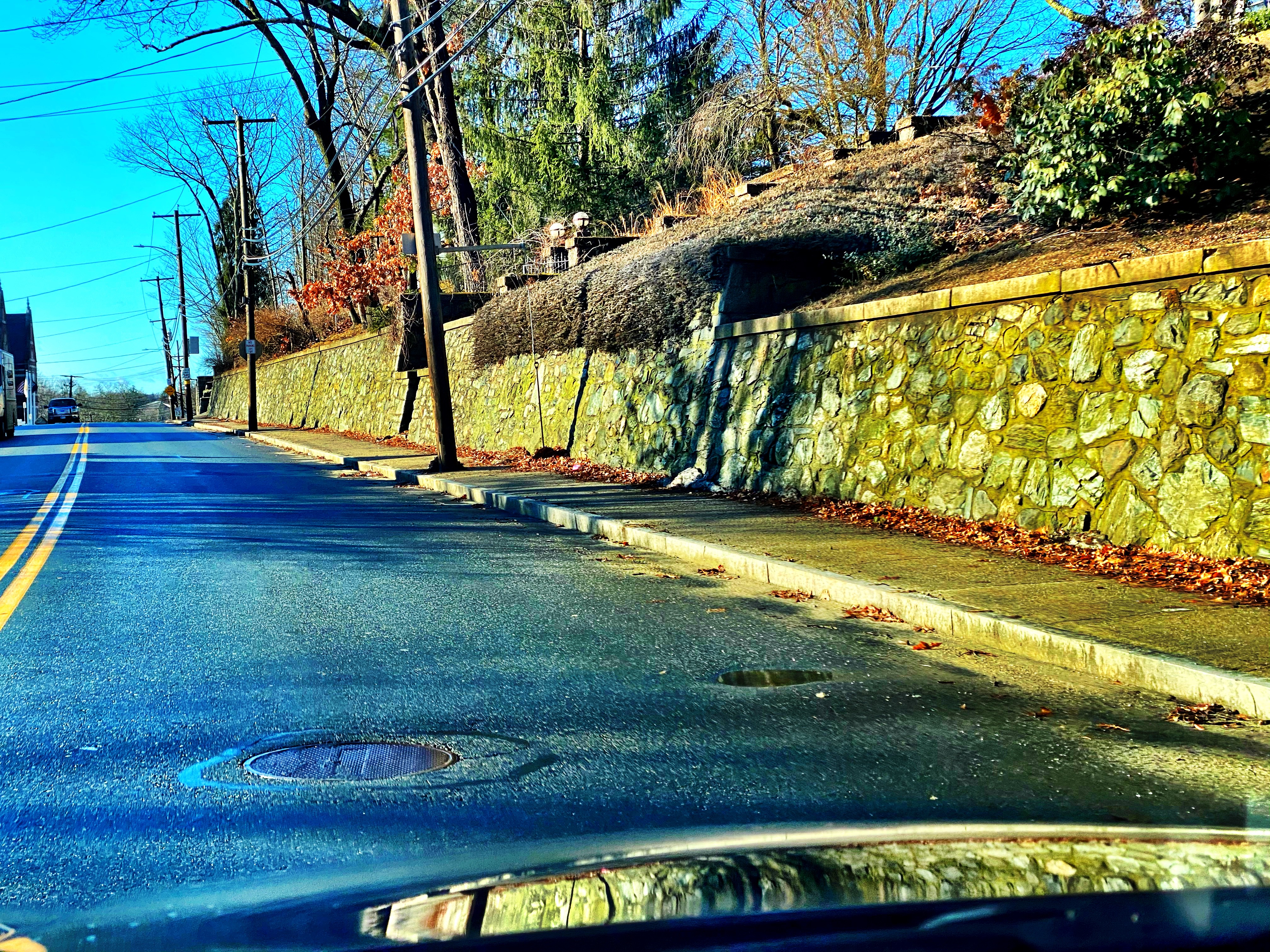 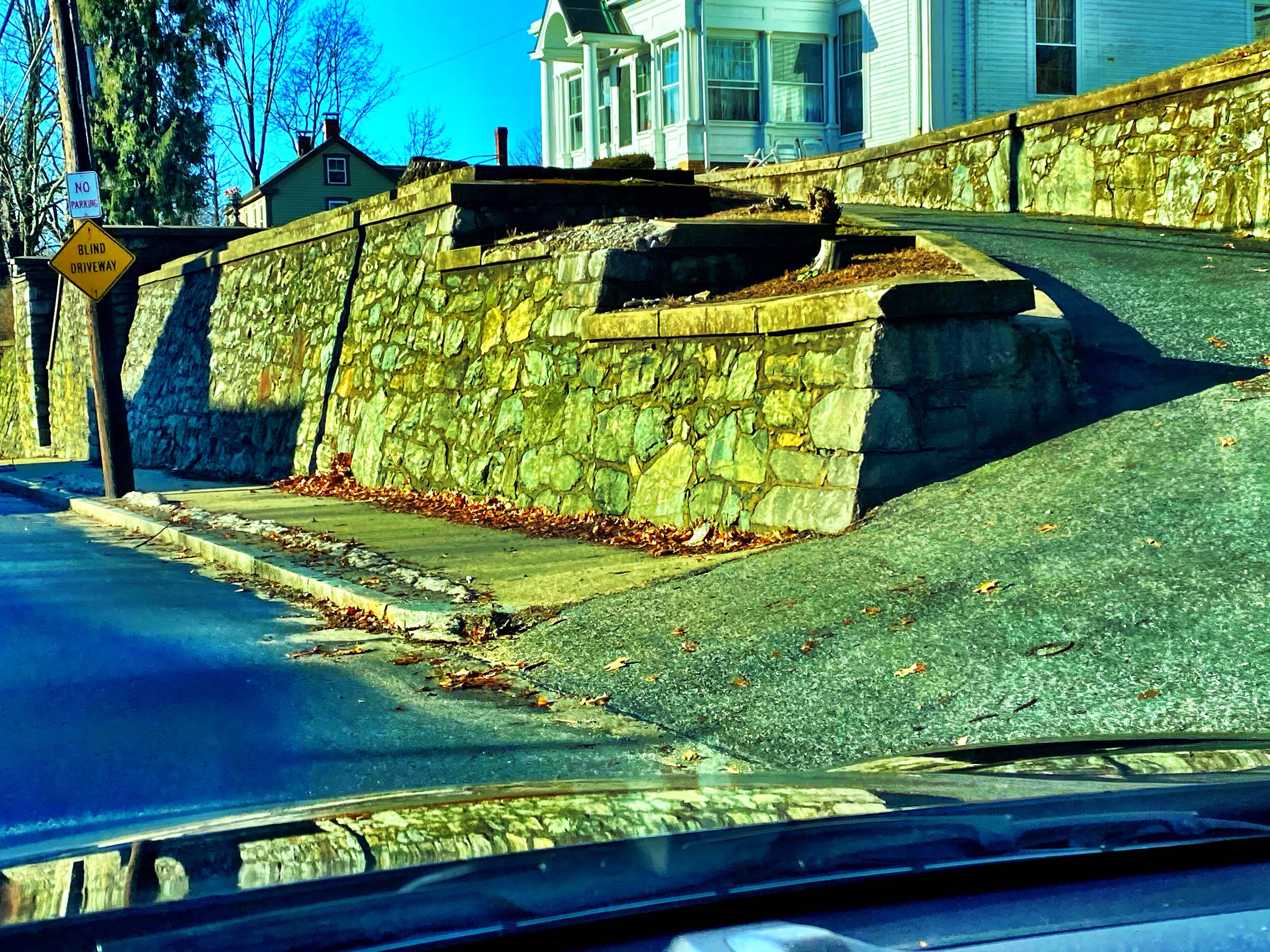 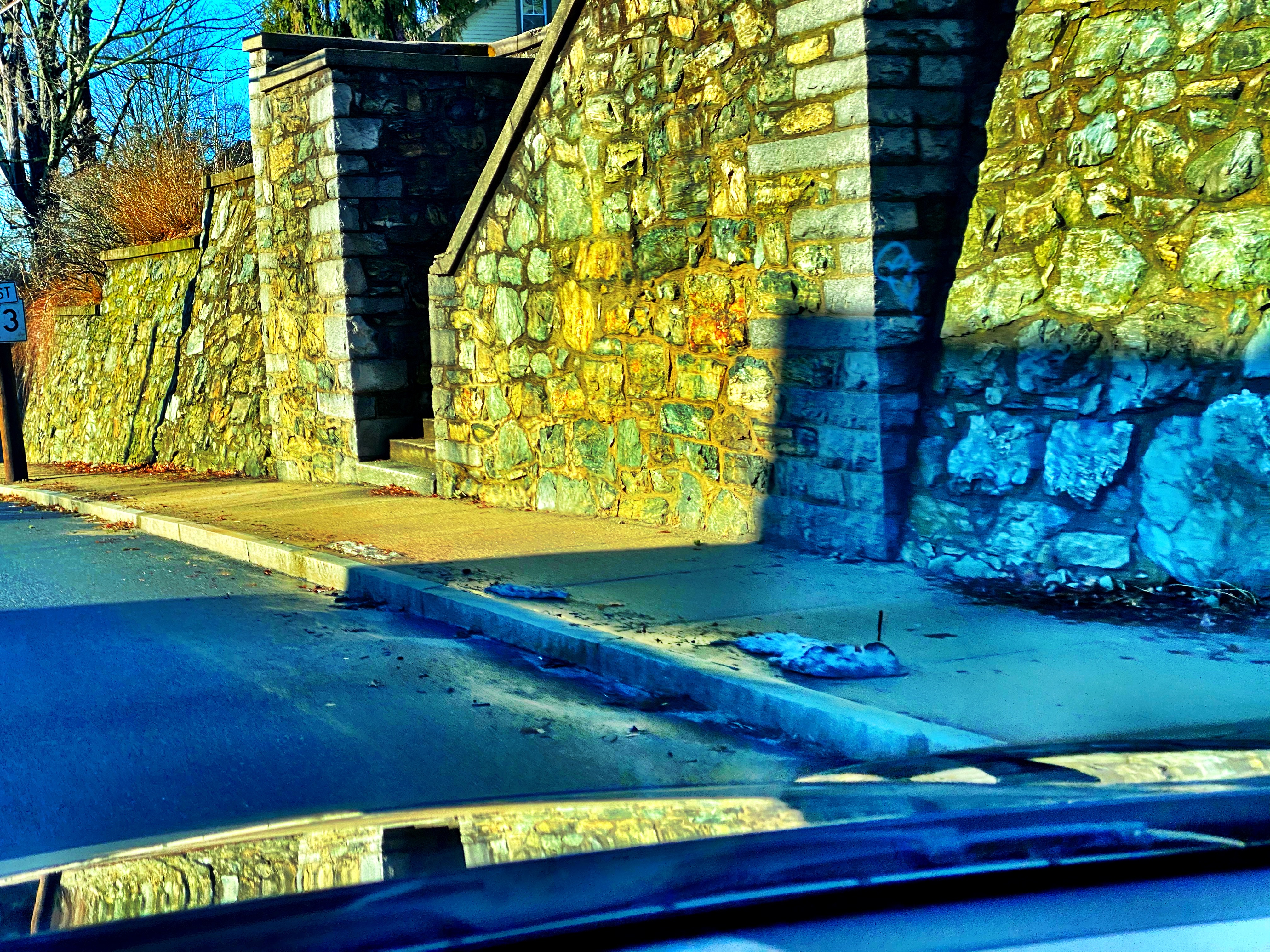 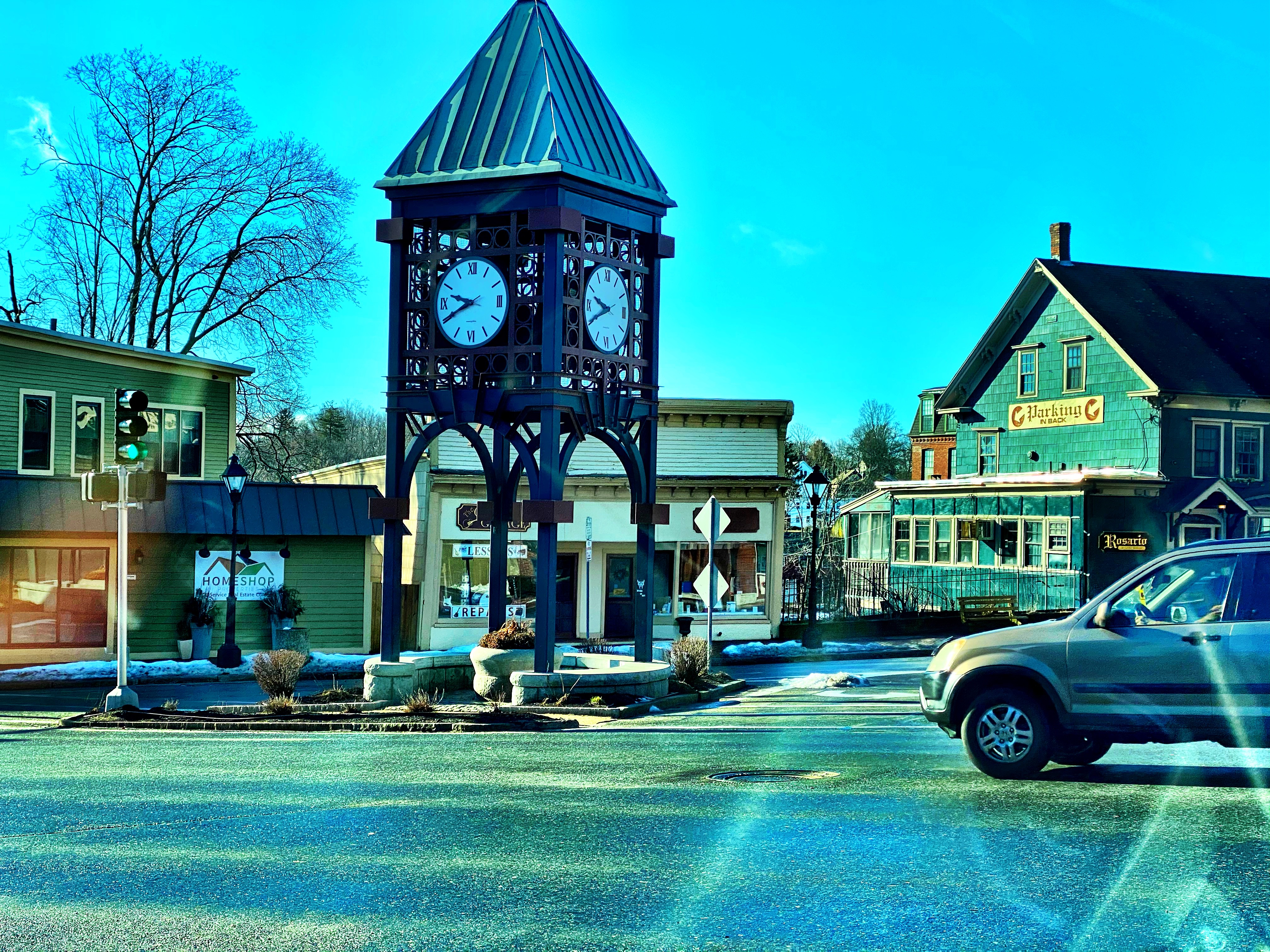 *Okay, here’s the real story. My beloved wife asked me to go out and pick up some breakfast for her. I drove past some stone walls on Pond Street and thought I should snap a pic but I didn’t. I drove to the store, got into the line, got right up to the front, and realized I forgot my wallet. I had to drive home, pick up my wallet, embarrassingly laugh at my own doofusness with my wife, then drive back. On the second trip I had the camera open and ready.

I feel like I should post something but I don’t know what. I was thinking about trying to sneak up to the ocean for some sunrise pics but I’m way too tired. Maybe Sunday morning. We’ll see.

I’ve done it (sunrise pics) at Salisbury Beach, which is in Massachusetts. I’ve done it at Hampton Beach, which is in New Hampshire. It only makes sense that the next one happens in Maine. Old Orchard Beach has a pier that is super cool and would look really good with some long exposure jazz happening in the water around it, but I am not sure that the sun actually rises over water there. The beach is actually in a bay and the land extends out into the water. If the angle is wrong, the sun would actually rise over the land. I spent some time looking at pics tonight both via Flickr and Google Images and it looks like it might be okay some days but not others. Either that or there was a lot of distance between the camera positions on some of those pics. I don’t know. The pier alone probably makes it okay, but if I am going to drive an hour to see the sunrise, I want to see the damn thing rise over the ocean, not the land. I can do that at home.

It’s a huge game today for fans in New England. This time of year it doesn’t get any bigger than this.

For some reason my gut is telling me that Jarome Iginla is going to light things up in the second period. I have no basis for that feeling except that Iginla is awesome. He’s a shadow of his younger self, but I am seriously digging the fact that he is finally a Bruin.

note: you didn’t think I was talking about the Patriots in the AFC Championship game, did you? Honestly, I could care less.

Every weekend night at bed time for the last few months I’ve been checking the weather forecast for Salisbury Beach. Any time it called for clear skies I would tell my beloved wife that if I found myself awake about an hour before the sunrise I was going to make the half hour drive to the beach and take a few pics. The idea was to have sunrise pics to complement the sunset pics we took at Mission Beach in San Diego last year. Because, you know, I am a total dork like that. It never happened. I even set the alarm clock a couple of times, but I just never got myself out of bed.

This morning I woke up at about 3:30am and never fell back to sleep. The forecast called for clear skies. At 5:20 or so I figured, I’m awake anyway… what the hell, right? I also needed to be up early to take the Nissan to the dealer for some routine work. So I just did it. I went to the ocean and snapped some pics.

Here’s a good chunk of them.

I was there with about 20-25 minutes to spare, and the sky was bright enough to see without any trouble. I killed time by snapping waves and sand and everything.

Check out that sky. I mean, right?

I wasn’t the only nerd on the beach. There was a couple to my right who were posing a stuffed animal in front of the ocean. There was another group of three people hanging out to my left who were just visiting and waiting for the sun to arrive. There were also some folks out on the water, apparently.

Even though the sun still hadn’t come up yet, I was digging the way the sky reflected off of the wet sand.

The Atlantic may be a total wimp compared to the Pacific, but she still snuck in a few decent waves.

The birds are flying South for the Winter. The jerks.

This guy doesn’t seem to be in a rush to get down South.

I guess there was stuff behind me too.

The guest of honor.

One thing I remember about our Pacific sunsets is that the sun was not too terribly bright when it reached the horizon. You could look right at it, no problem. That was not the case today. It got really bright, really fast. I put the neutral density filter on not long after the sun first poked it’s head above the water. Sunglasses for the camera, if you will.

The farther out I zoomed, the less light made it in.

At this point the sun was well and truly up, and it was time to head to the Nissan dealer. Check off another of the goofy ideas I have for photo shoots. Done and done.

Yup, we found the source of Lake Asshole, the endless cellar flood. New water heater coming soon.
I played like dog shit tonight.
She has avoided me like the plague this weekend. Pun very much intended. #isolation #selfisolation
Band practice photos from 1999! My Les Paul Custom, pre-pickup swap (post neck break though), @musicdrums33 ’s drums, and most important @geyer.Michael ’s Rick!!! Best bass guitar ever.
I think this snake is trying to make my lawn mower his home. The potential for a mess is kinda high.