Oh yeah, there’s that film Instagram too, in case I haven’t mentioned it in the last four minutes…….

I haven’t had my breakfast yet, but I did play guitar for an hour. I put rhythm parts onto two faux 50/90 songs.

For the first time ever, my new favorite guitar played through my favorite amp and it was glorious.

Well… the second song was glorious. The playing was sloppy as hell but the tone was epic. The first song… I might want to try that one again. It’s sounds good, but I think I can get it to sound better.

No, I didn’t play it, but I did set it up so I can play it later. I don’t know when I will get the chance, but soon.

New Les Paul, meet the Deluxe Reverb that has been away for 2.5 years. You guys are going to have some fun together. The pedal board that you can almost see in this photo will also change. I brought home what I used to call the stay-at-home pedal board that I also left at the band’s rehearsal space back in January 2020 (irony). I want to take two pedals and the power supply off of that board and add them to my current home recording board. Once that’s done I will be ready to get back to work on the fifty songs thing.

See that black thing with the word, “Fender” on it?

Know what that is?

That’s my favorite amplifier. That’s my Fender ‘65 Deluxe Reverb Reissue. It’s been at Mike’s house since late January 2020 and it’s finally back home where it belongs.

Kevin, Mike, and I were pretty terrible tonight but not nearly as terrible as I expected. We took turns throwing out song titles and then hoping muscle memory would kick in so we would remember how to play them. For the most part we did.

For most of the night my signal chain was 100% things that had never been to a Lizardfish practice before. My new Les Paul into the Ryra The Klone into the Malaise Forever Black Lives Matter into the Vox AC15. I sounded okay. A little too toppy but okay. I mostly did the Clapton Les Paul thing (not “Woman Tone”, the other thing) where you run both pick ups but lower the volume on the neck a little. It sounded pretty good.

I was pleased with the AC15. I had been a little concerned that the little 15 watt guy would struggle to keep up with the bass and drums. I need not have worried. It cooked right along with lots of headroom to spare.

As well as the Vox preformed tonight, the biggest take away is still the Deluxe Reverb coming home. At last.

I went back and tried to redo the picture of the guitar from the previous post. I did this in manual mode on my DSLR. Inside the camera, I had the aperture set to f/5.3 and the shutter set to 10. The ISO was set to 400 because that was the speed of the film I had in Dad’s camera.

The EXIF data in Flickr mostly matches, but where I would expect to see a shutter speed it gives an Exposure of 1/10. The too dark pic on the previous post was in Aperture priority mode, I think. This pic was in manual mode. The too dark pic was f5.0 and Exposure 1/30. Does that mean the shutter was 30? I don’t know. I think it might be time for me to finally start paying attention to these values. I’ll also note that I don’t think Dad’s camera can match these settings exactly, but I am hoping my camera can match what Dad’s camera does. I guess.

Anyway, this one looks pretty good to me. Not great, but pretty good.

What does the Vox sound like to me? Well, with a very limited amount of experience with Vox style amplifiers, the MV50 sounds like it really wants to sound like my AC15 but only sort of comes close (the AC15 in turn probably sounds like it’s trying to sound like a Vox AC30, so maybe it’s more correct to say the MV50 is trying to sound like the AC30). It’s got that sparkly thing in the high end that Vox amps are known to have. It sounds good, but not quite great. I tried slamming the cute little nutube in the pre-amp stage with an avalanche of signal from the Ryra Klon Klone and it collapsed into a squashed out over compressed lump of mess. When I do the same thing to an actual tube amp it sounds more like… bliss. Yeah, that’s a good adjective… bliss. Is bliss actually an adjective or is it a noun that I am using as an adjective. It’s been so long since I’ve thought about grammar, you know?

I am all setup in my bedroom music nook for some November Musical fun. I brought the Vox MV50 Clean amp and the speaker cab I bought to match with it out of the living room and into the bedroom. They will go back when the kids come home for Christmas break because I usually keep that amp plugged into the piano so they can use it.

I still have the Fender Bassbreaker 15 here for use with the re-recording music. The cab is a Bassbreaker cabinet too and it looks almost identical to the Bassbreaker 15 itself so it almost looks like I have a Bassbreaker stack going. I don’t though. I have not brought out the A/B/Y switch to let me run the two amps together. Maybe at some point I will, but for now I just have one amp each for two separate projects.

Nutube… not a gimmick at all.

So I’ve kept a little Union Jack on top of my guitar amplifier at home for years and years. The reason is, I hoped that magically it would help me sound like The Who. Strangely it never worked.

Now it could have a new meaning, but only under one certain condition. I could sit it on top of my new Vox amp because Vox is a British company…. well, they are Japanese now, I think, but Vox amps, along with Marshall amps, are often referred to as British Sounding amps… because they were designed and (used to be) made in the UK.

Conversely, Fender amps are often referred to as American sounding amps because Fender is based in the US. They are also based in Mexico and Japan, and I believe the Bassbreaker series is actually made in Mexico.

Whatever, Vox is UK, Fender is US. If only I had a little American flag, I could put the proper flag on each amp. 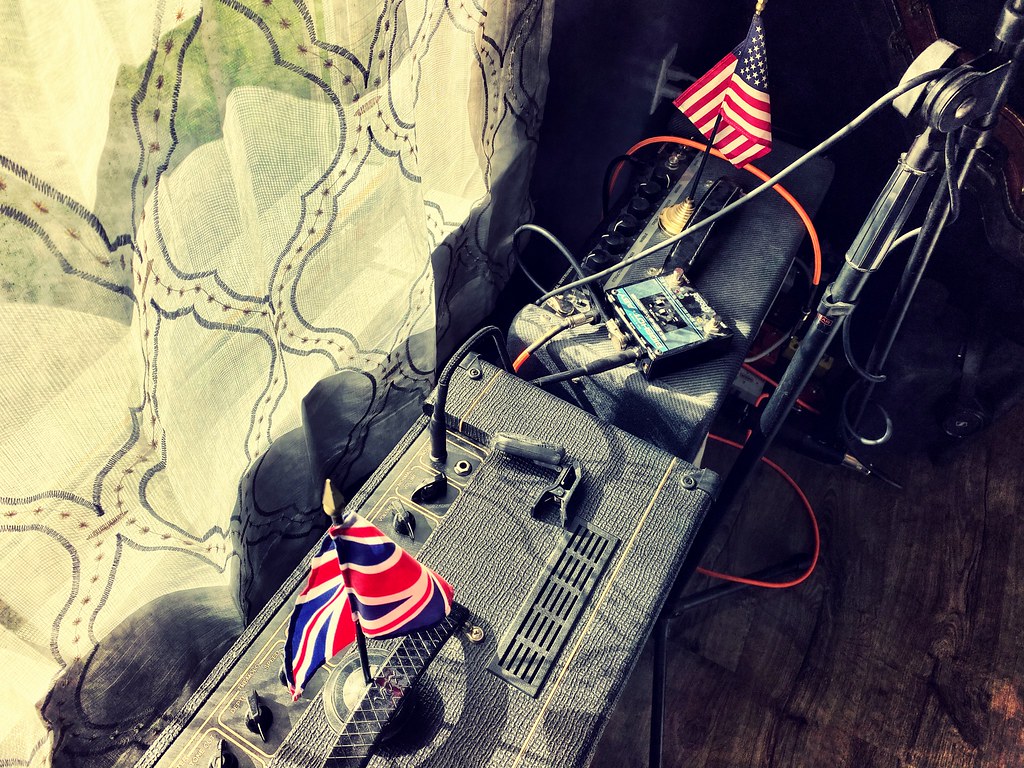 I spent my lunch break moving stuff around. The Fender Bassbreaker 18/30 is way too loud to play at home with other people in the house. At the last gig, back on Feb 1st, it was EPIC. At home it’s just too much. For the last 2 months it’s been used as a table to hold my Bassbreaker 15 which has been the only amp I’ve used since RPM ended on Feb 29.

I brought the 18/30 down cellar and stored it off the floor as we’ve had some moisture issues. It should be safe. At the moment, the 15 is sitting alone in my music nook in my bedroom.

However, changes will continue. The Vox AC15 is on a UPS Brownie and it is scheduled to be delivered by 9:00PM.

Screw that, I WANT IT NOW!