I saw this at a CVS in Salem, NH two nights ago:

To that, I say, BITE ME. It’s not even Halloween yet and they are putting out Christmas crap. I hate Christmas. Now granted, last year my first Christmas crap sighting in a store was in September, so October 27th was a pleasant surprise. Still…

I wonder if the Halloween decorations (33% off) are jealous. 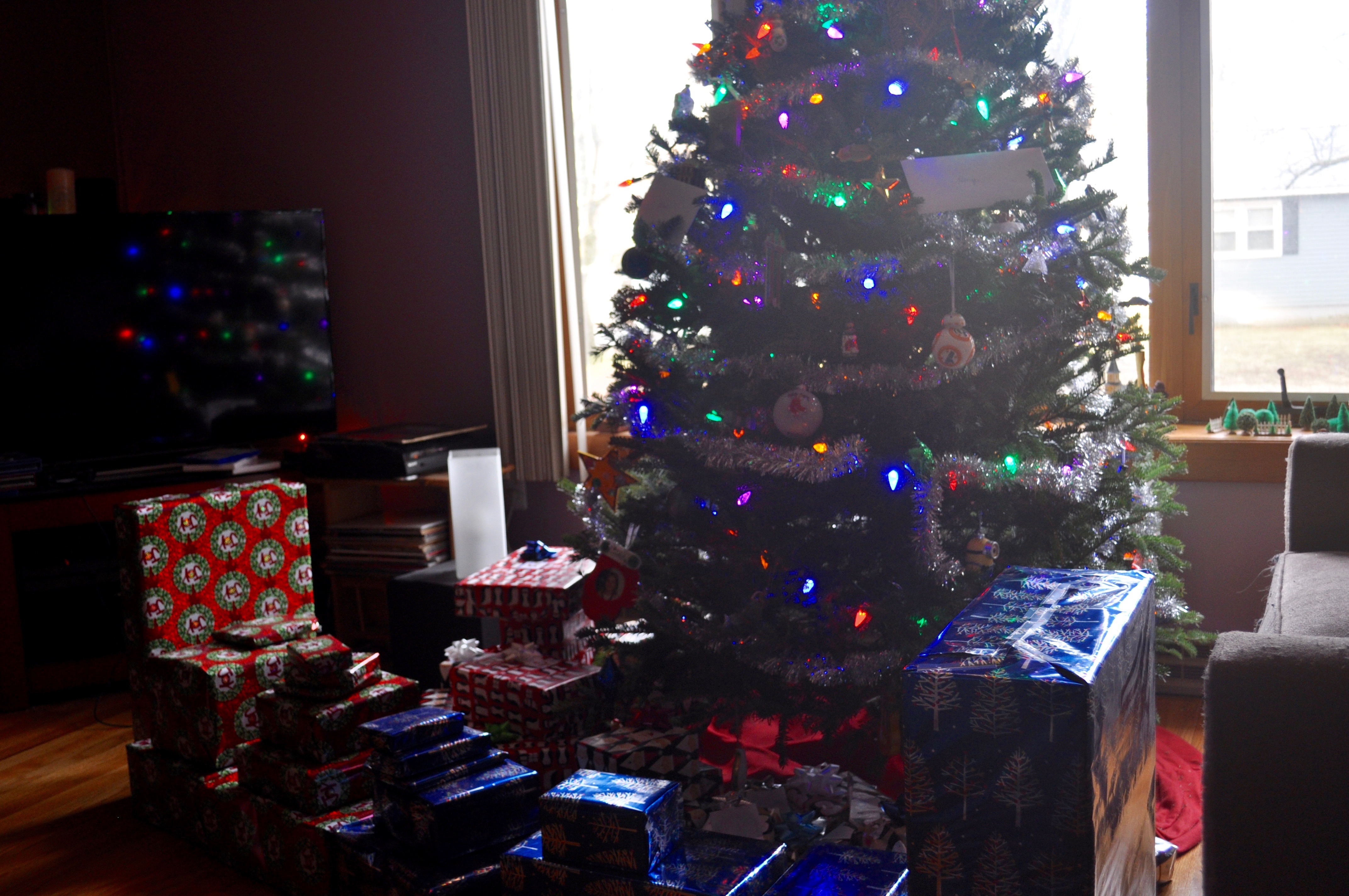 Santa Claus came to our house. The kids woke up at their dad’s today which means Santa could just leave everything in our room and we could put it all under the tree this morning. You’d think that would be convenient, but it really actually sucks. We both want the kids here. We both miss them. It doesn’t ever really feel like Christmas when they don’t start the day with us. The good news is we’ll pick them up at dad’s in an hour or two and then come back here for the annual wrapping paper shredding bonanza. This afternoon they will go back to their dads and Jen and I will be sad again, but at least we’ll have had our own Christmas morning with them. Next year though… next year they start the day with us and it will be the BEST!

Wishing all of you and yours a Merry Christmas if applicable. If it’s not applicable then I hope you have an extra fantastic day for no good reason at all.

Hello everyone, and welcome to a happy Christmas Eve.  We all hope you are having a wonderful day with family, friends, and loved ones (and hopefully you didn’t have to go to work).

Have a wonderful Christmas Eve, and tomorrow have an even wonderfuller Christmas Day. 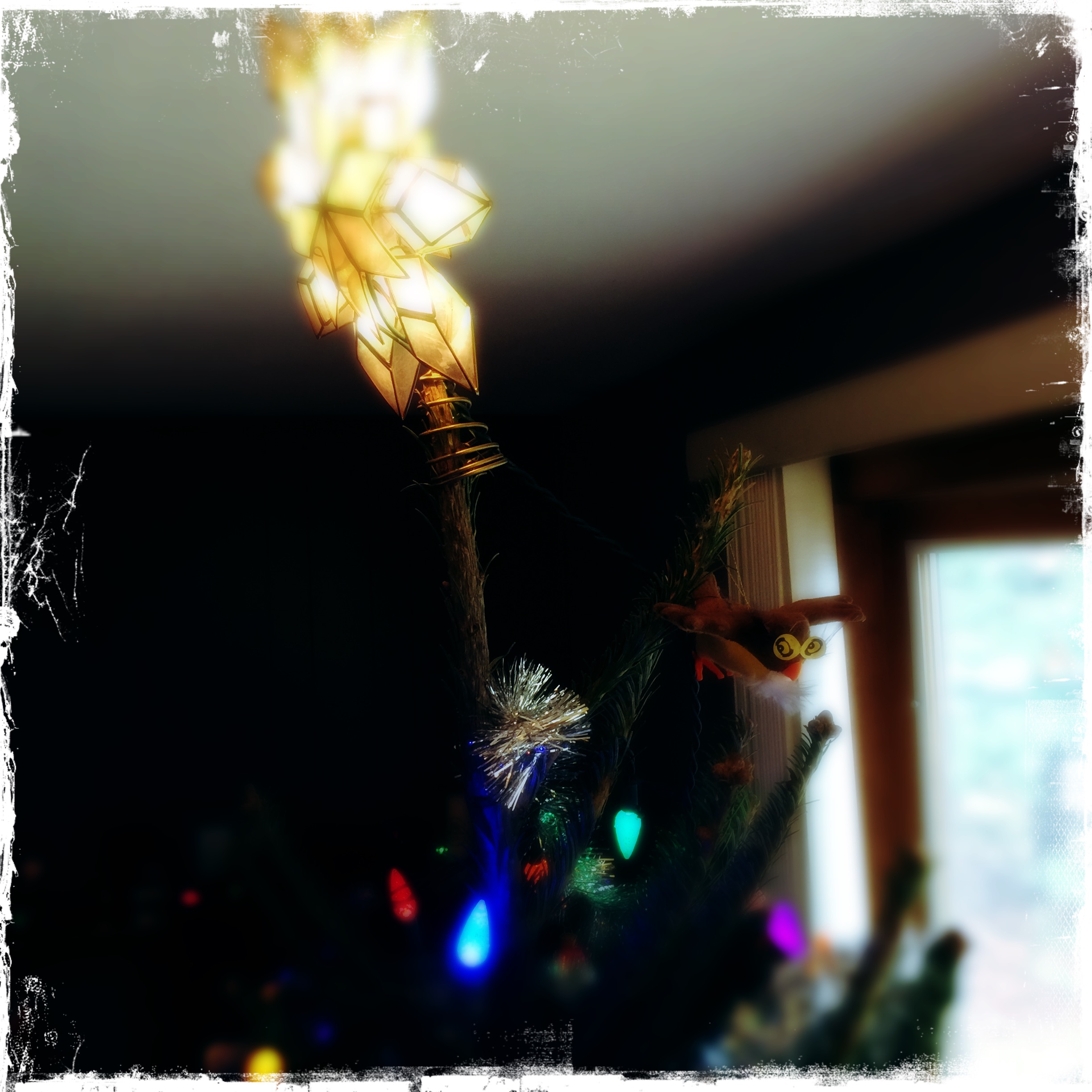 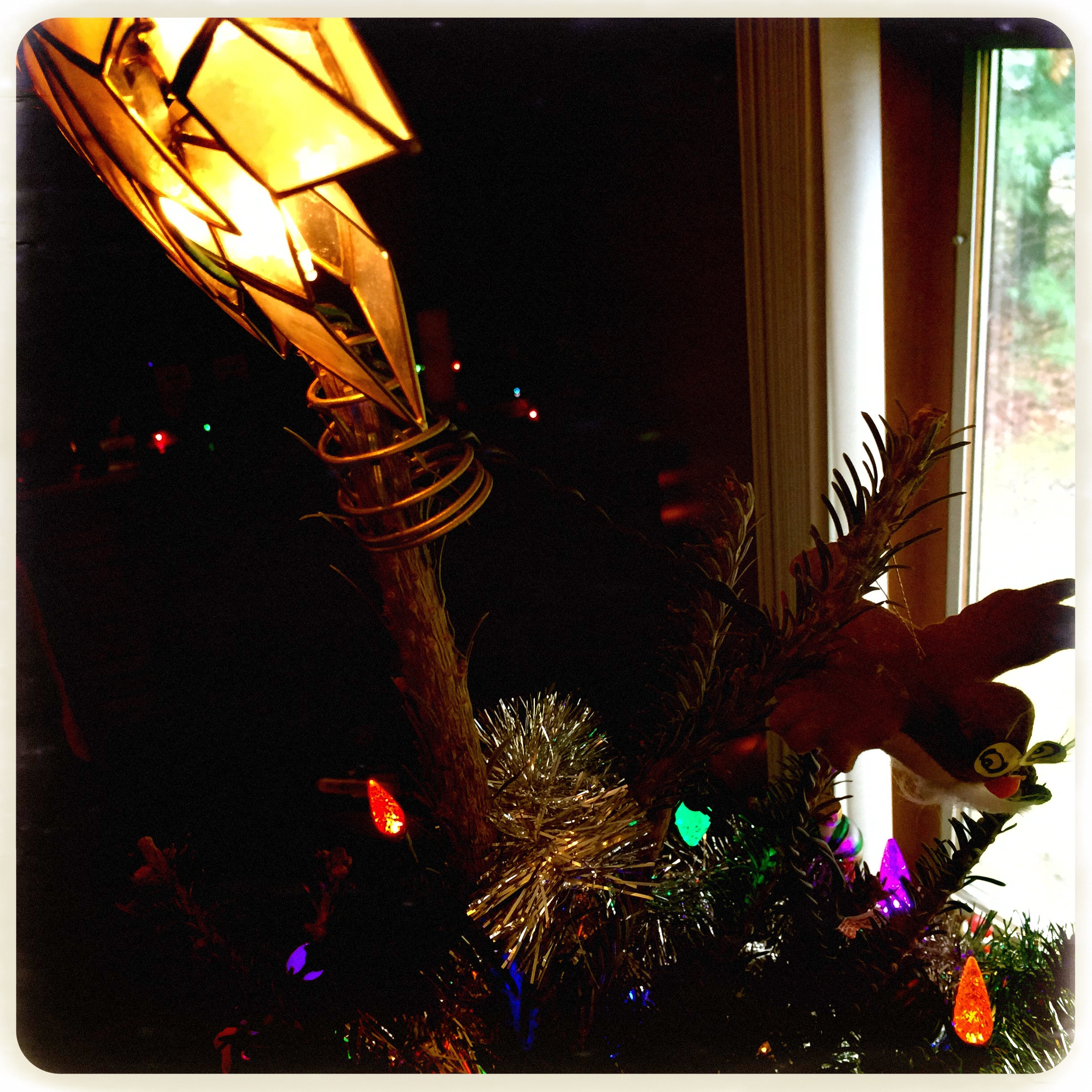 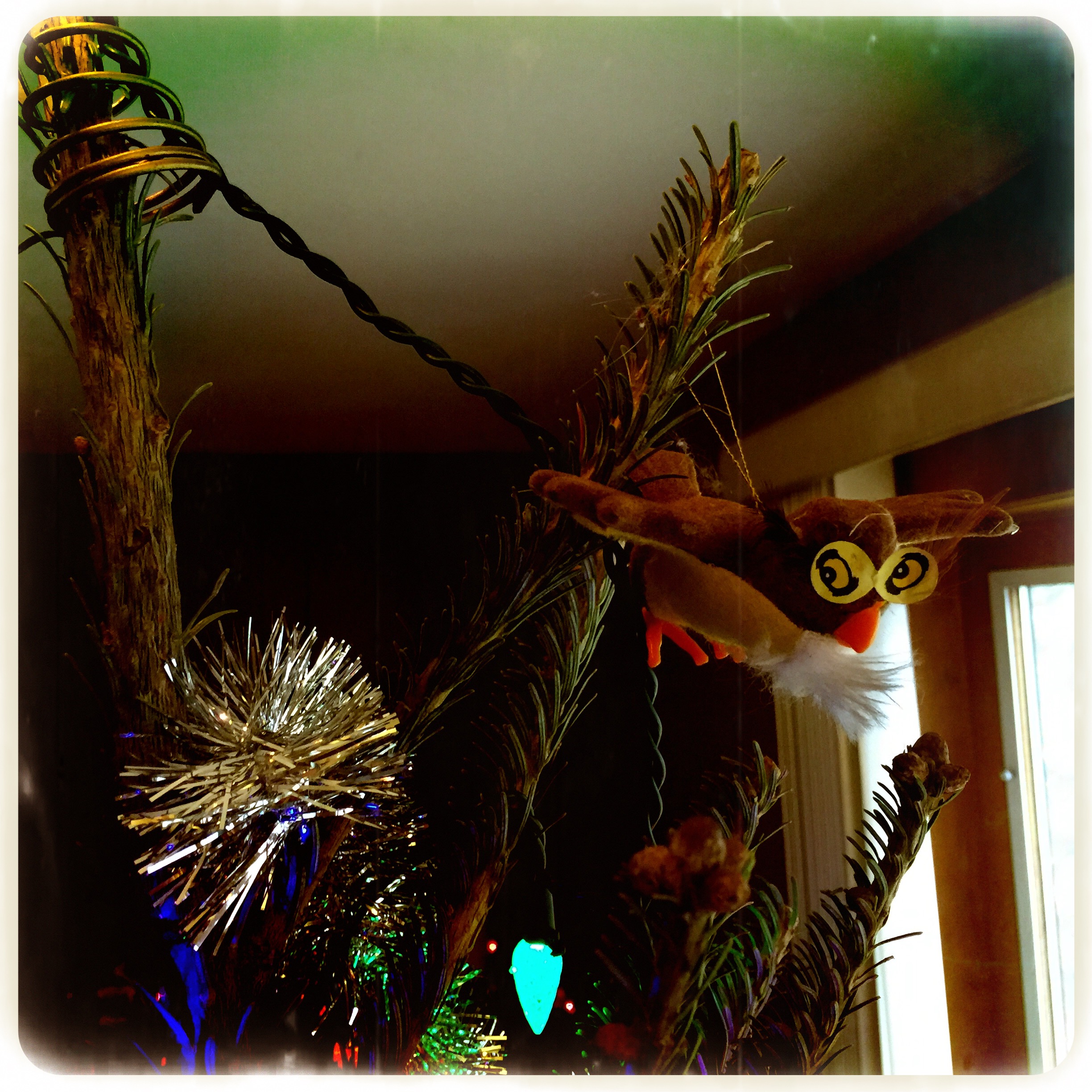 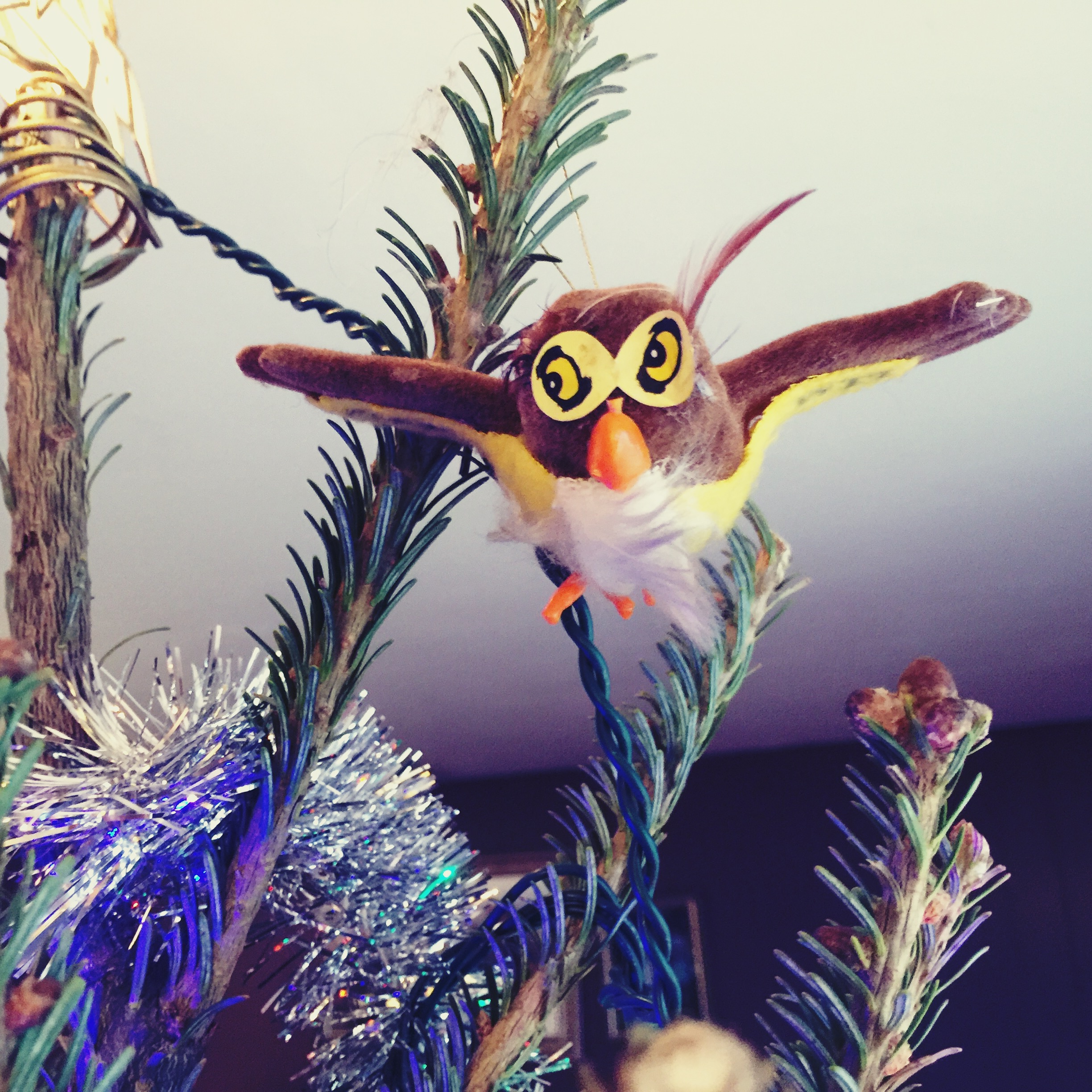 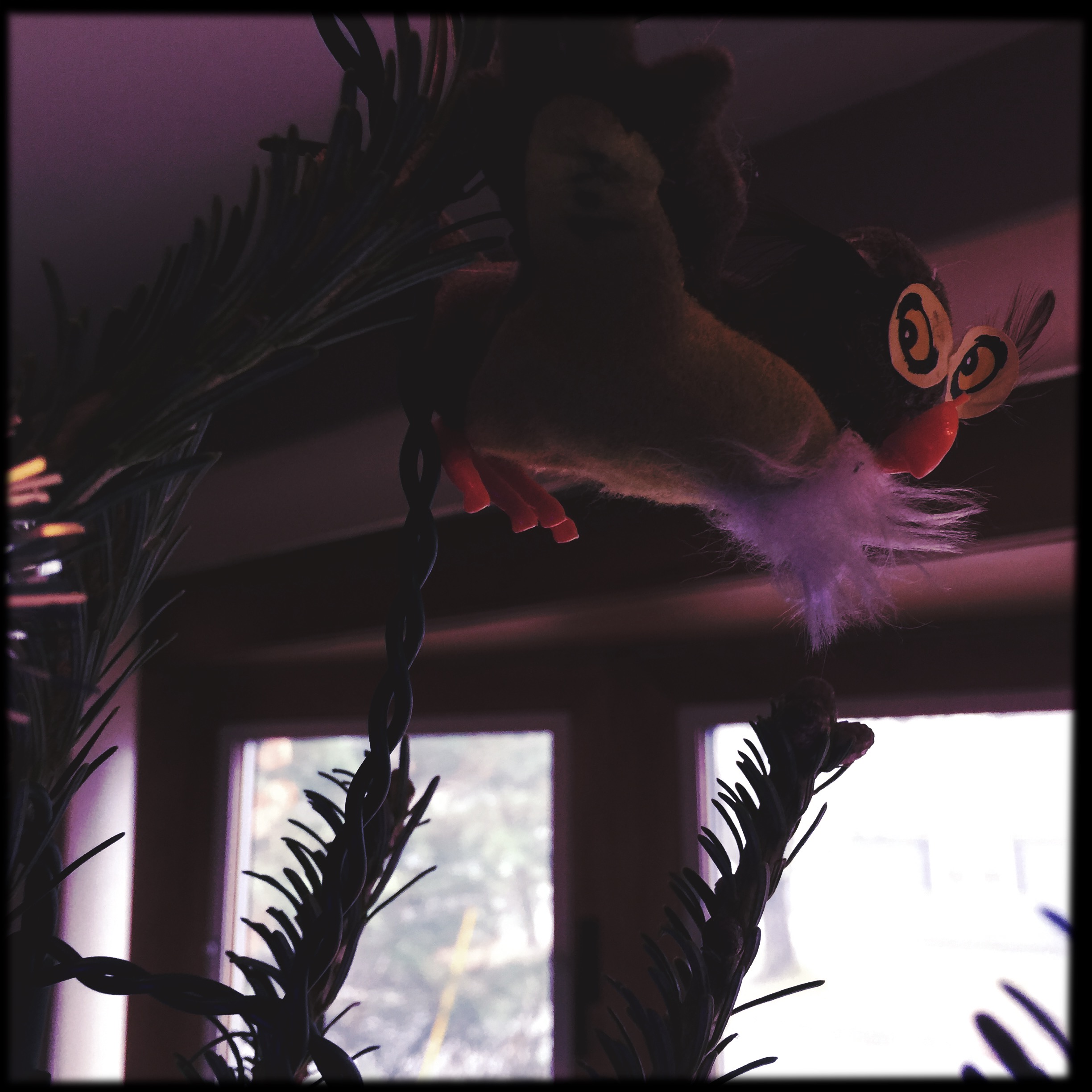 We went out in search of Christmas lights last night.  The search led us to Attleboro, MA (practically Rhode Island, from our almost New Hampshire point of view) and the shrine at Our Lady of La Sallette.  They sure had lots of pretty lights! 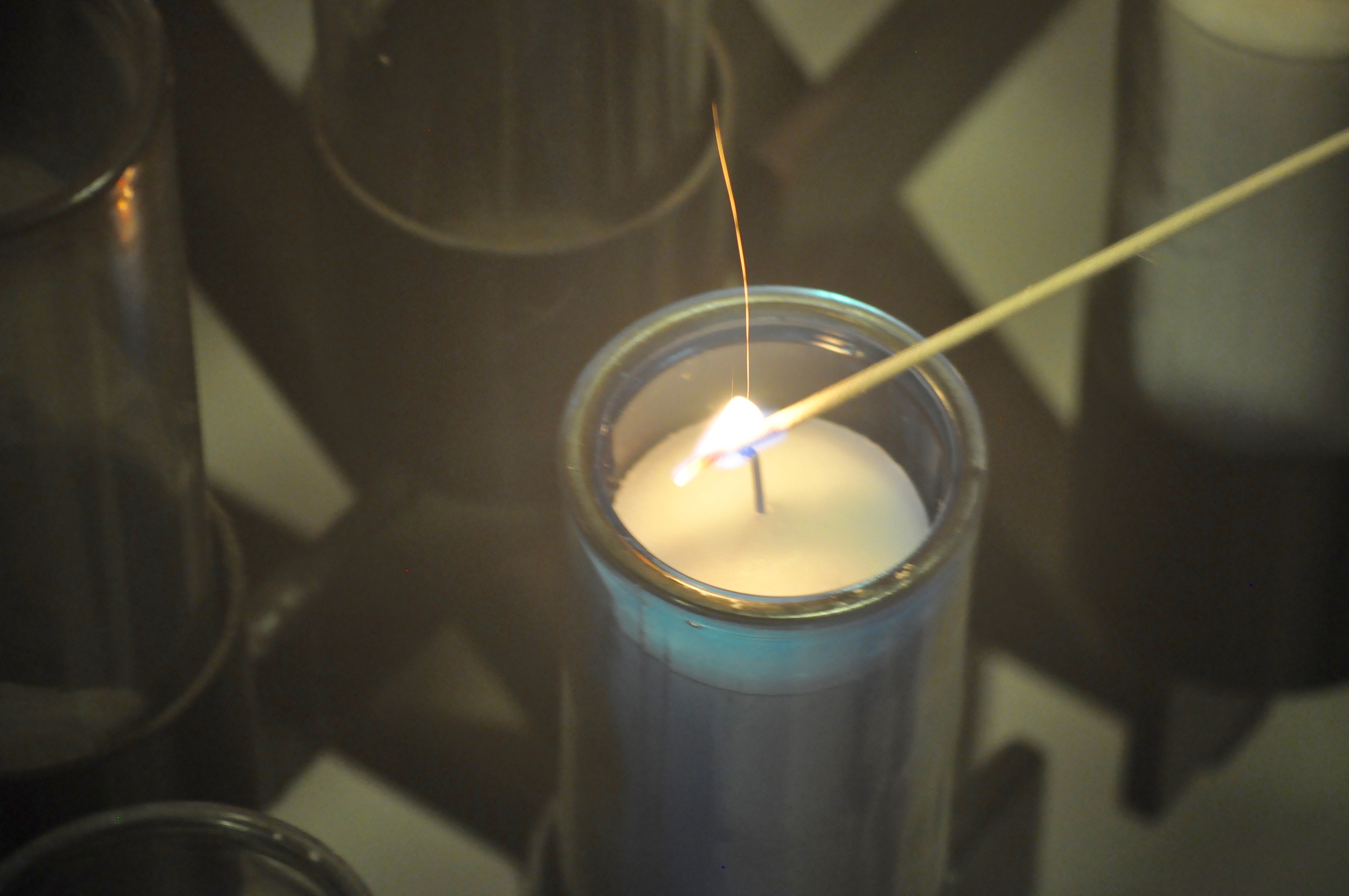 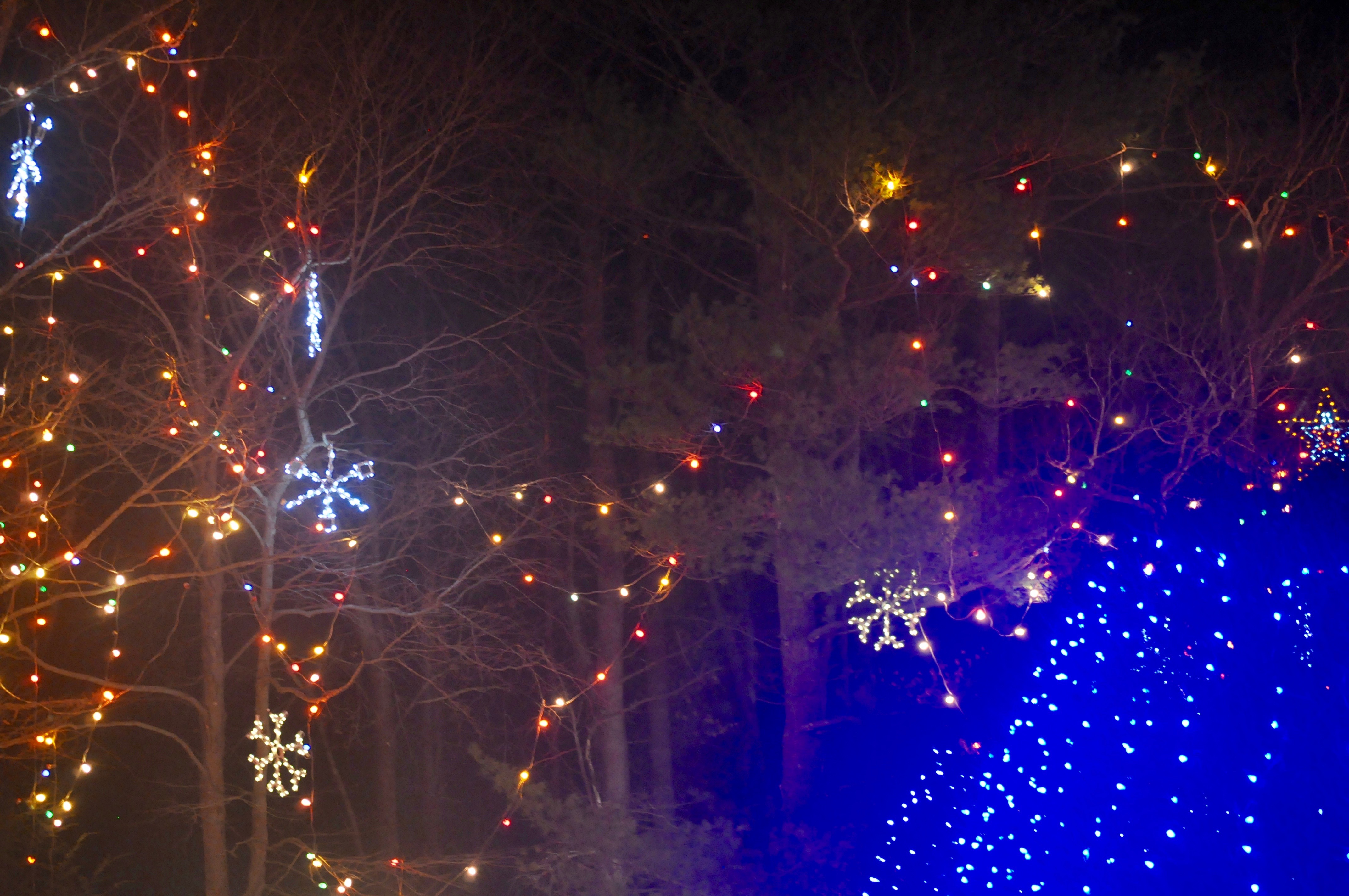 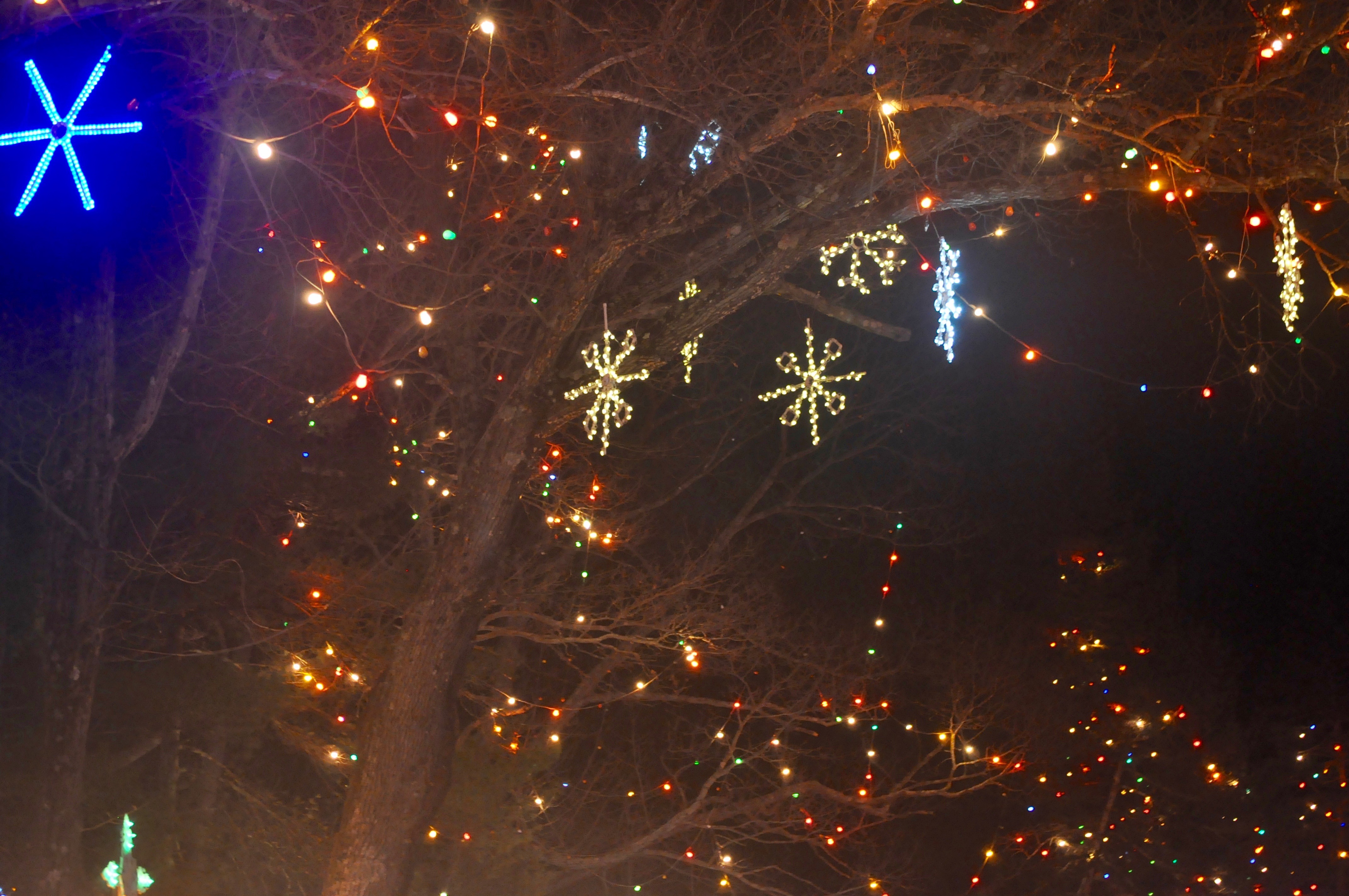 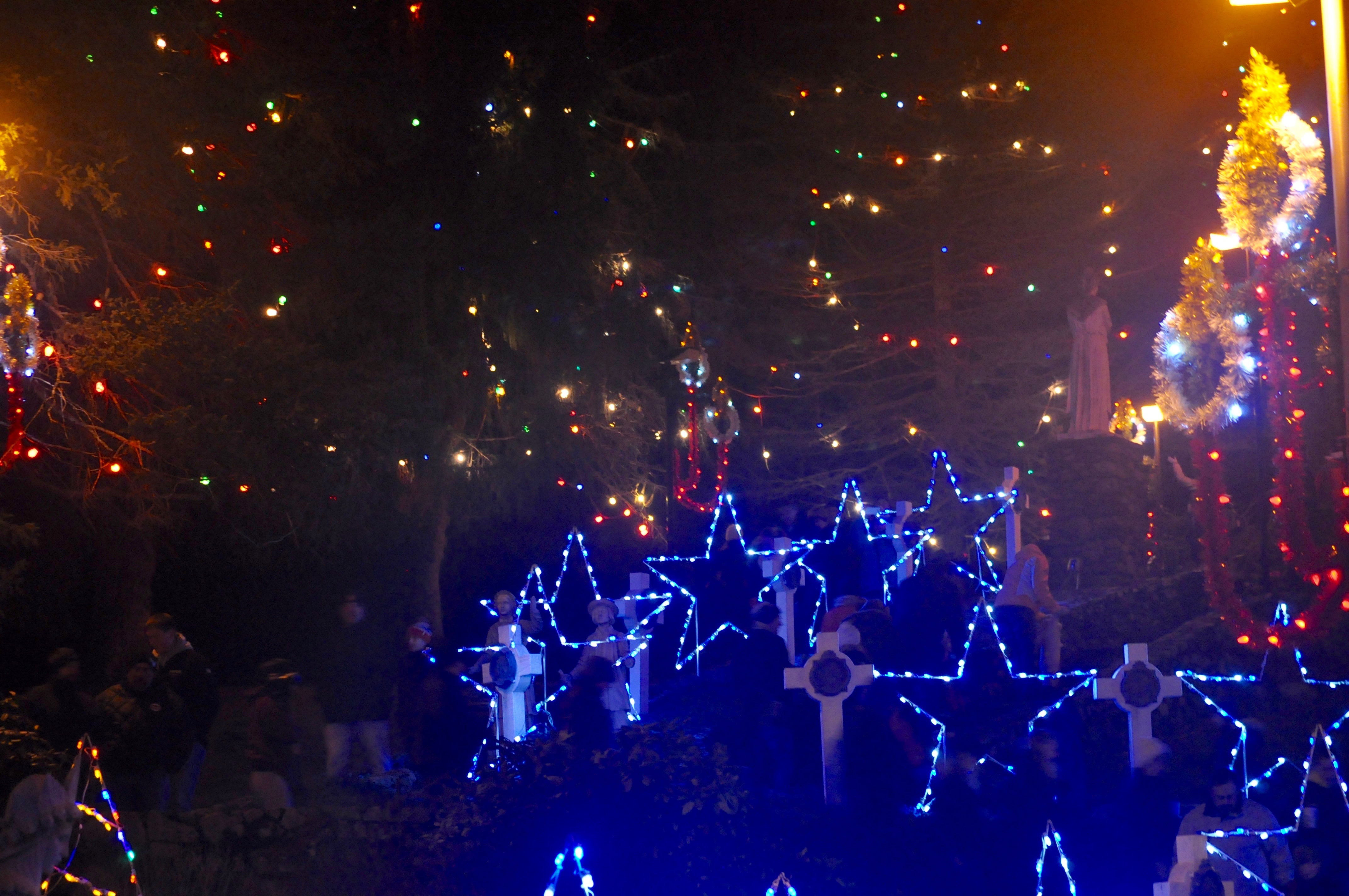 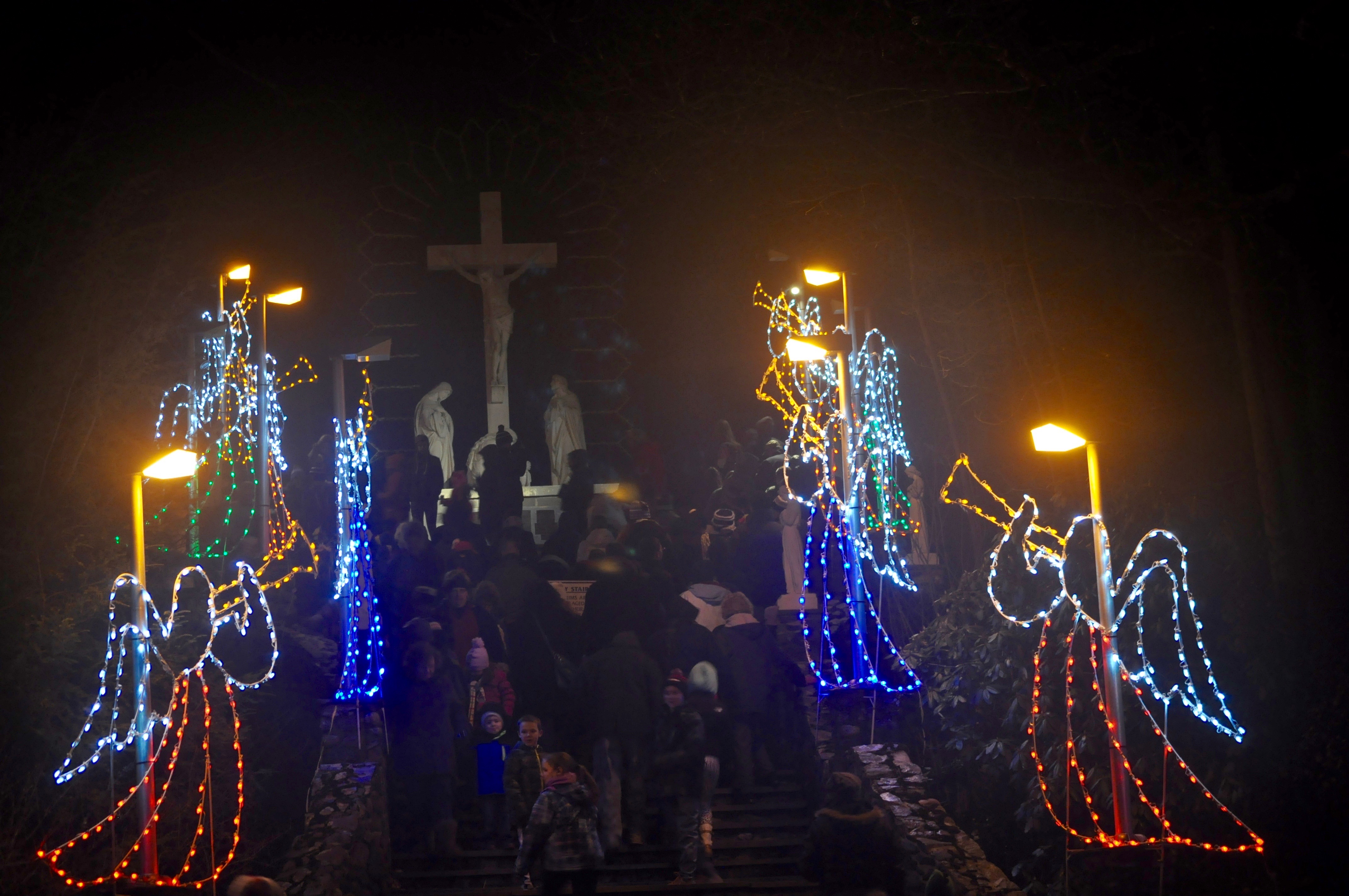 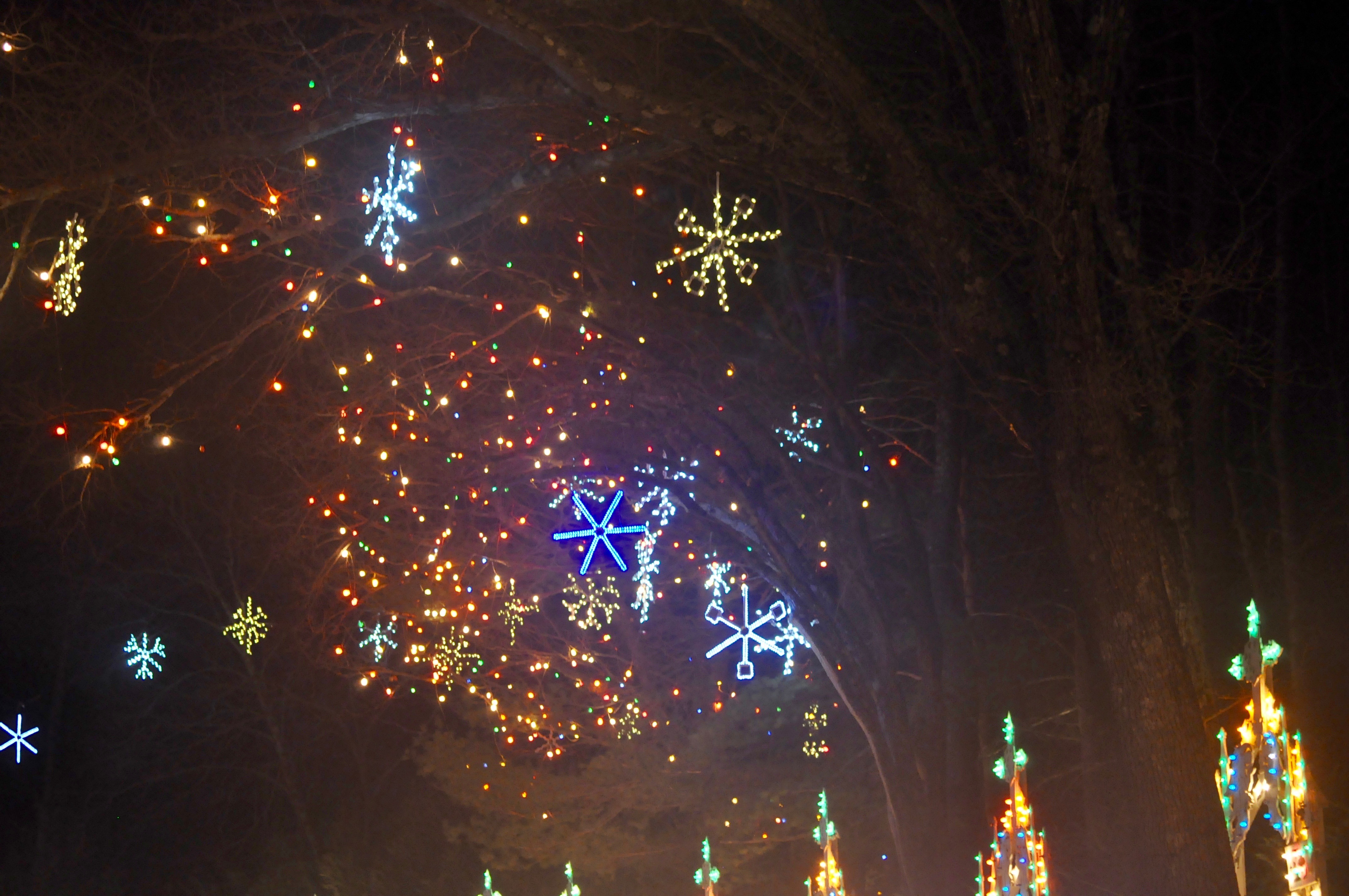 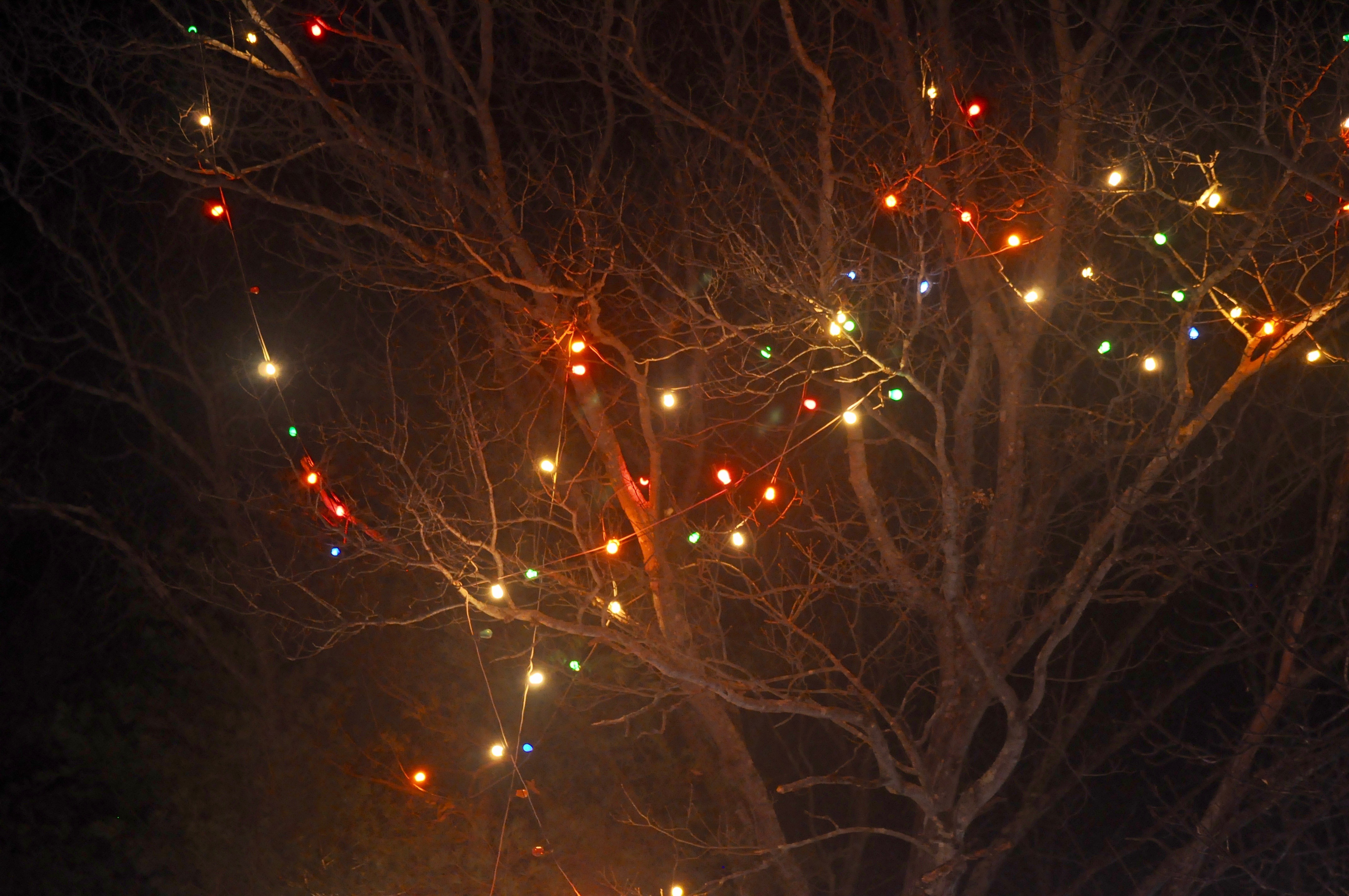 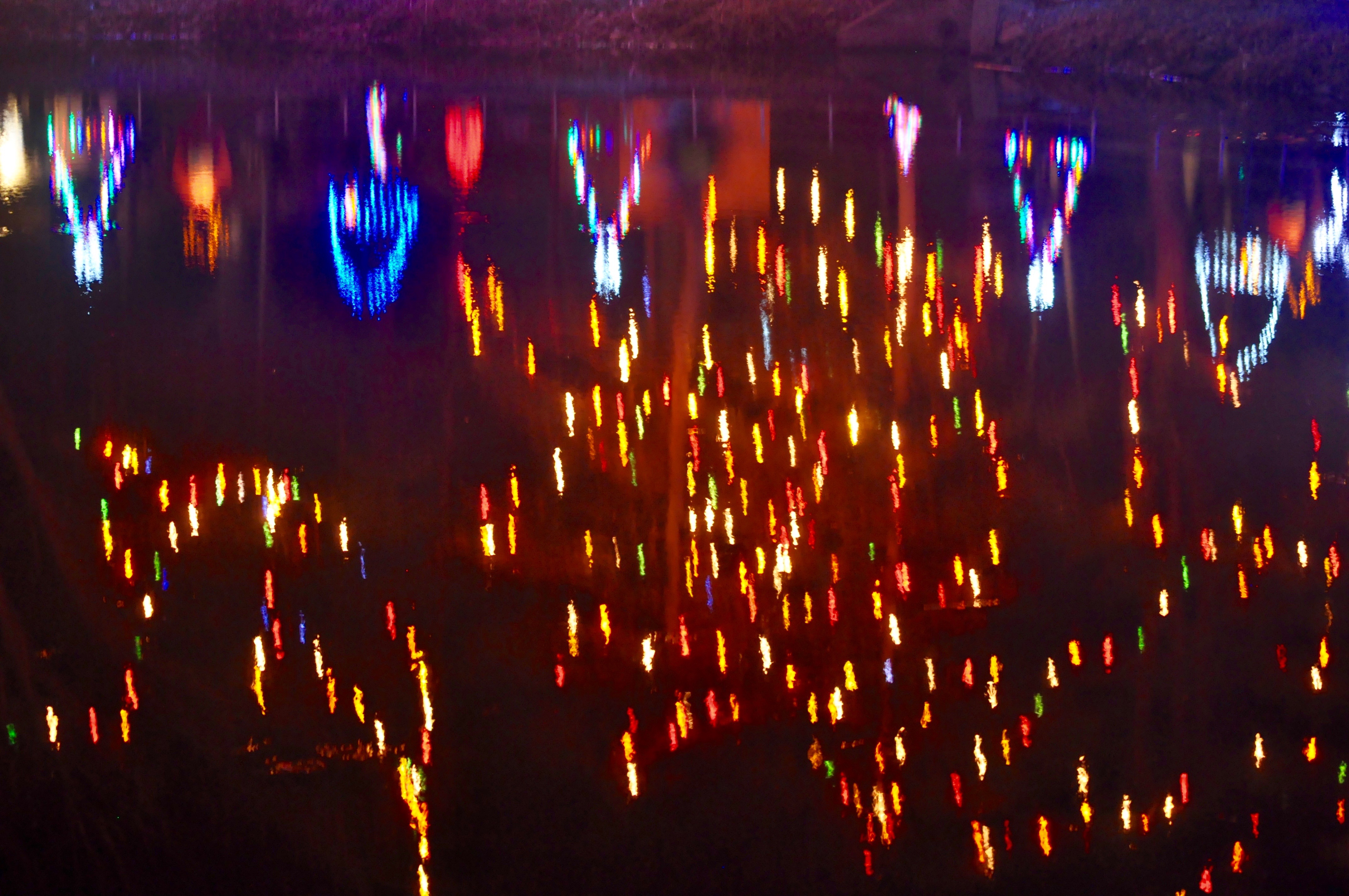 BB8 wishes you all a merry Christmas!

Kylo Ren wishes you a merry Christmas too, but he’s being all dark side dick about it.

Hipster R2-D2 has been wishing people merry Christmas since before it was cool.

Tree: Purchased and put up in the living room.
Decorations and wrapping paper and stuff: Some purchased, some purchasing in progress. 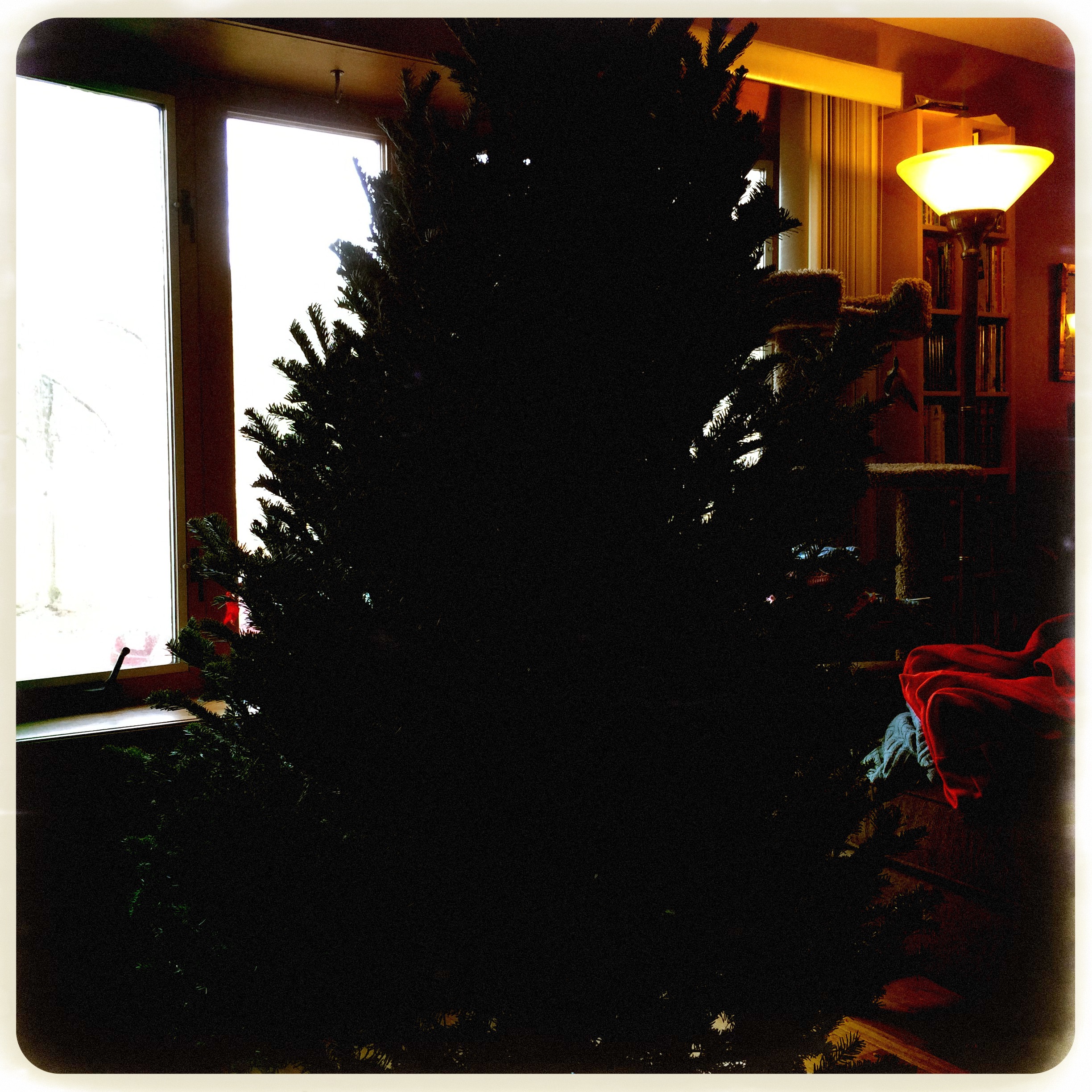 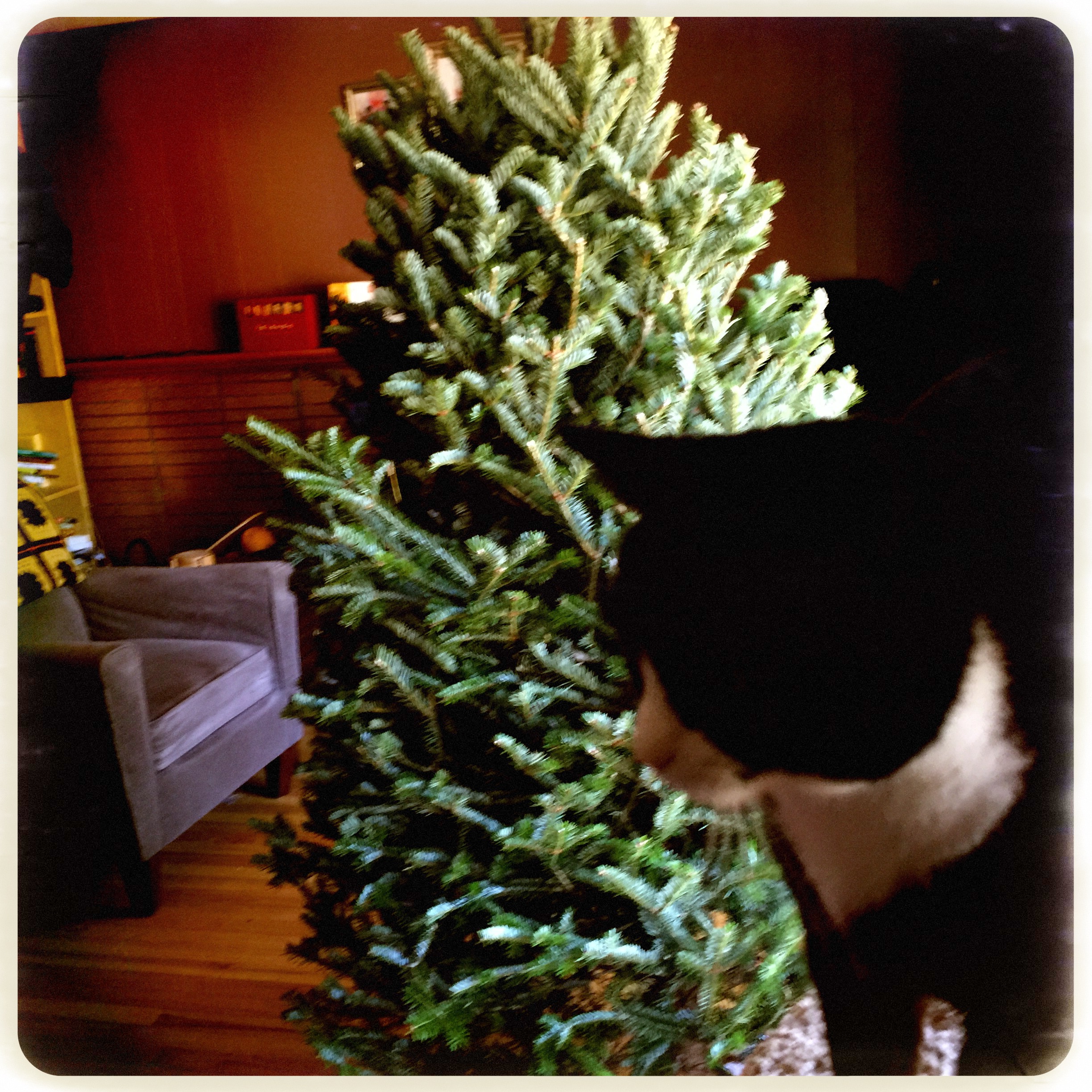 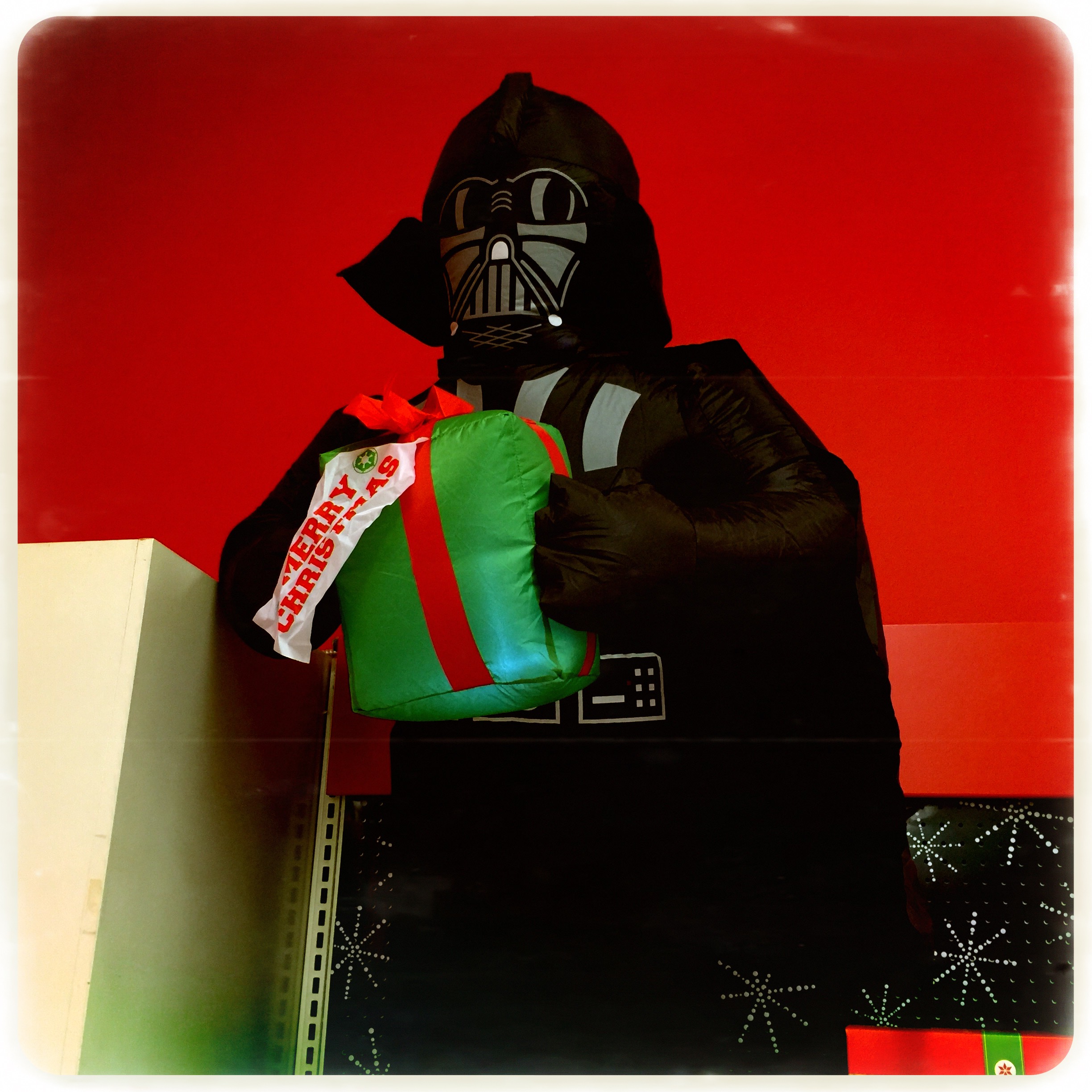 Note: The idea of Lord Darth Vader giving you a gift is completely absurd. He would force choke you to death and then steal all of your presents. Everyone knows that.

We were all set to go tree shopping last night.  We have a fake Christmas tree in the cellar but someone who shall remain nameless (me) suggested that maybe this year we skip the fake tree and get a real one.  Everyone agreed.

Jen wanted to get a tree last weekend, but I didn’t.  It wasn’t a kid weekend, and I wanted the kids to have a say in whatever tree we end up with.  Last night was the first kid night we’ve had since then, so we were going to go last night.  I even brought up the tree stand from the cellar and moved the furniture around.

Unfortunately, Jen had work to do after dinner and one of the kids still had a little homework.  Jen suggested I take the kids and go without her, but that would be just as bad as going last weekend would have been.  We can’t go tonight because two of us don’t get home until late.  We can’t go Friday because one of the kids has a school function and two of us won’t be home until late.  Saturday is our next opportunity so I nervously threw it out as a suggestion, expecting to hear complains and you-hate-Christmas accusations (which wouldn’t be all that inaccurate).

Nope.  I got an I-don’t-want-to-go-without-mum from one kid, and an we-can-go-in-the-daylight from Jen.  The other kid just agreed with me. Nice!  I promise I’m not sabotaging Christmas by pushing things off. Really.  This isn’t selfish anti-holiday behavior.  This was really for the best.

Remember when you were a kid and you did something wrong. What was one of the things your parents might have said to you? “I hope you grow up to have kids that are just like you!” Today is an example of that particular mother’s curse coming true. Sort of. Not really, but sort of.

My sister is three years older than me. My brother is six years younger. Starting from my sister’s 5th or 6th grade year and carrying through in an unbroken line until my brother graduated high school, my parents were subjected to at least one but sometimes two school Christmas concerts per year.

As band geeks, we thought they were pretty cool. As parents… it must have been no less than the tortures of the damned. Every year the same small group of Christmas songs over and over and over again. The only differences being the slight changes in interpretation made by the band directors from elementary school to junior high to high school. My poor, poor parents. It must have been unbearable.

Now they get their revenge. Sort of. Between my two step kids there will be more Christmas concerts this year than you can possibly imagine. One kid has a concert with his guitar teacher. Both kids have concerts with their piano teacher. One kid has a concert with the middle school. The other kid has concerts with the high school. Oh my sweet goodness there are four (4) (FOUR!!!!) Christmas concerts this year alone!

Now I make no attempts to hide the fact that after all of my Christmas concerts, I pretty much hate Christmas music. I’ll tolerate it for a brief period leading up to, and immediately after Christmas itself, but otherwise? It makes my skin crawl and my teeth ache. Really.

Having said that though, I can say that the mother’s Christmas concert curse doesn’t really bother me the way it should. Why? Because while I hate Christmas music with a burning, undying passion, I love listening to the kids play. I’ll grit my teeth and struggle through the agony of listening to everyone else’s kids have their turns at the various recitals, but when my step kids are on the stage? Well, that is one of the greatest things ever. Guitar, piano, chorus, choir, concert band, jazz band. I love it all. I love hearing them strut their stuff on the various instruments they play. It helps that they are so much better than I ever was, but it’s not just that. I love to see them enjoying it.

Music is near the top of the list of the greatest things humans can do with their time, and it is such a thrill to see the two kids loving it as much as I do.

Sorry mom and dad, but this particular revenge isn’t so bad.

My brother and my brother in law partook of the Macallen Christmas night. On Christmas Eve my wife and my father in law did as well. They all approved. 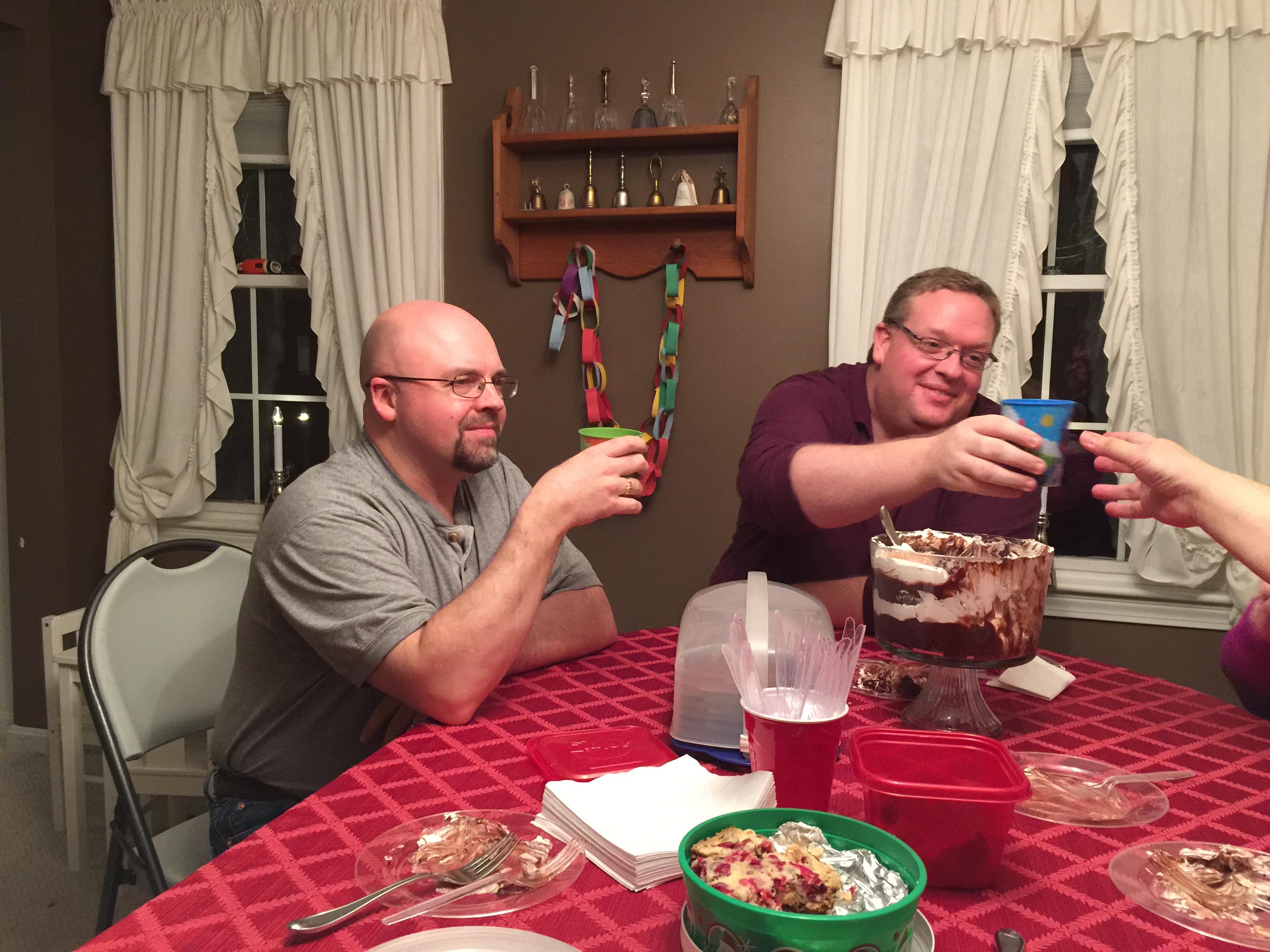 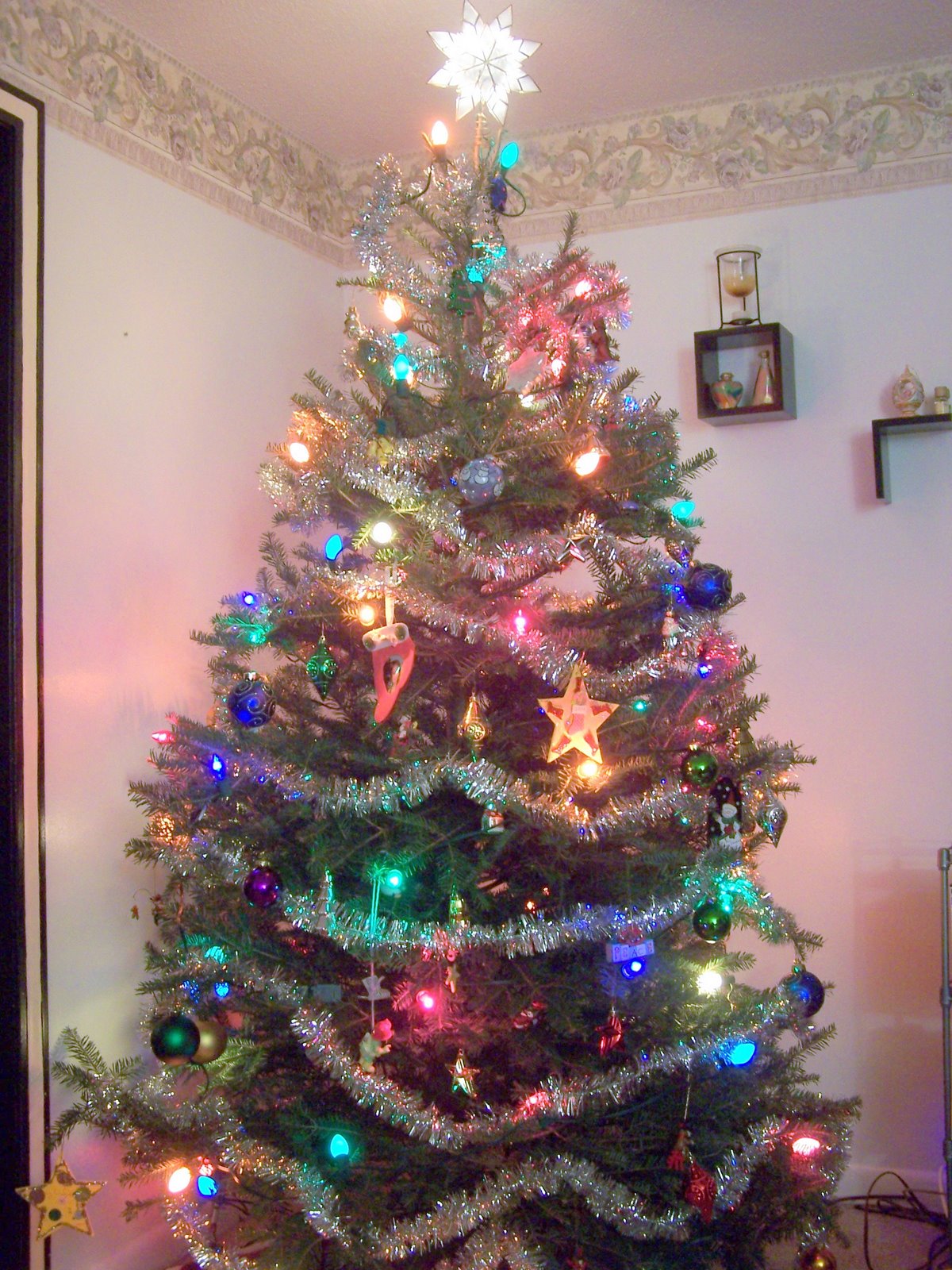 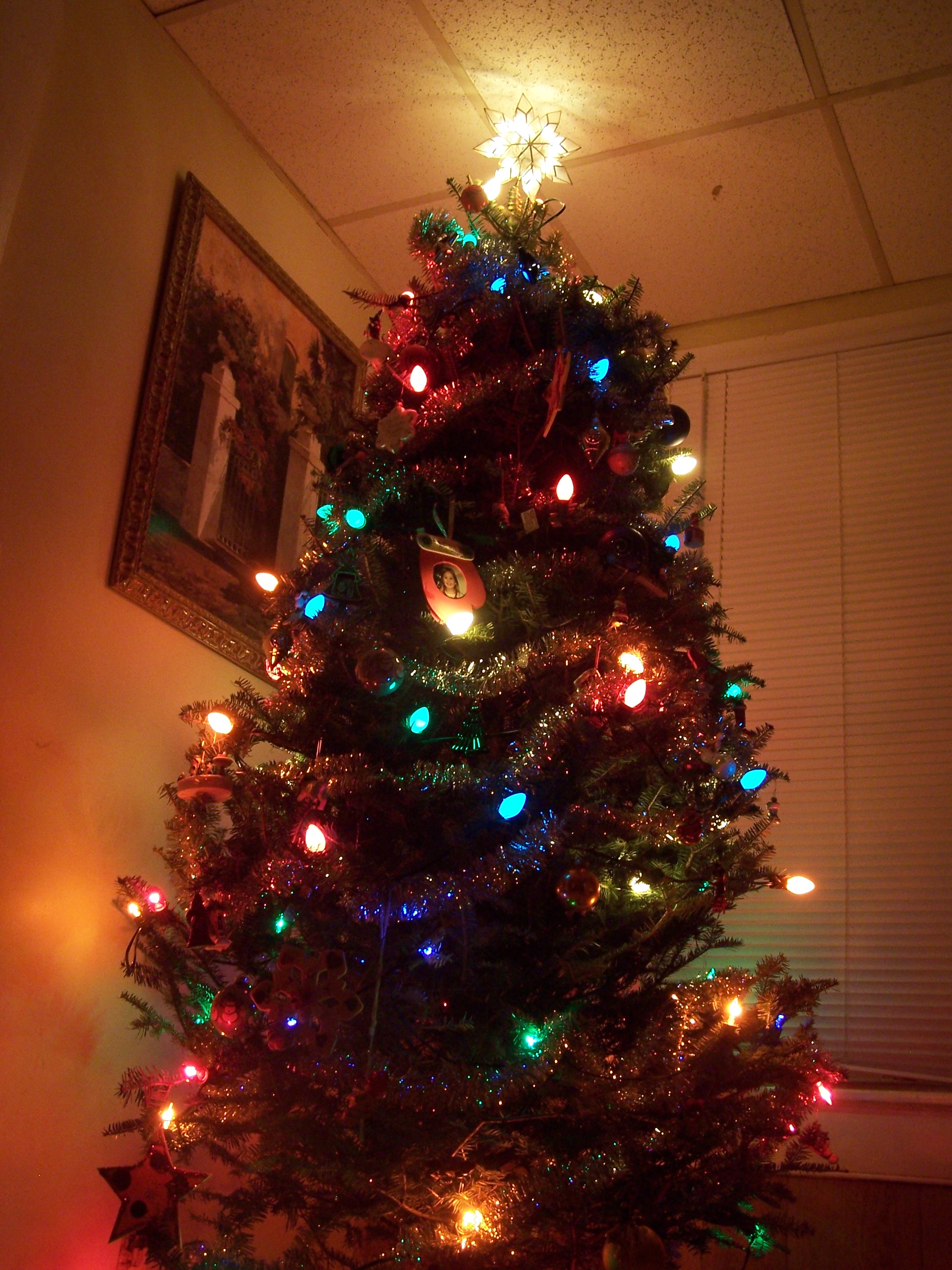 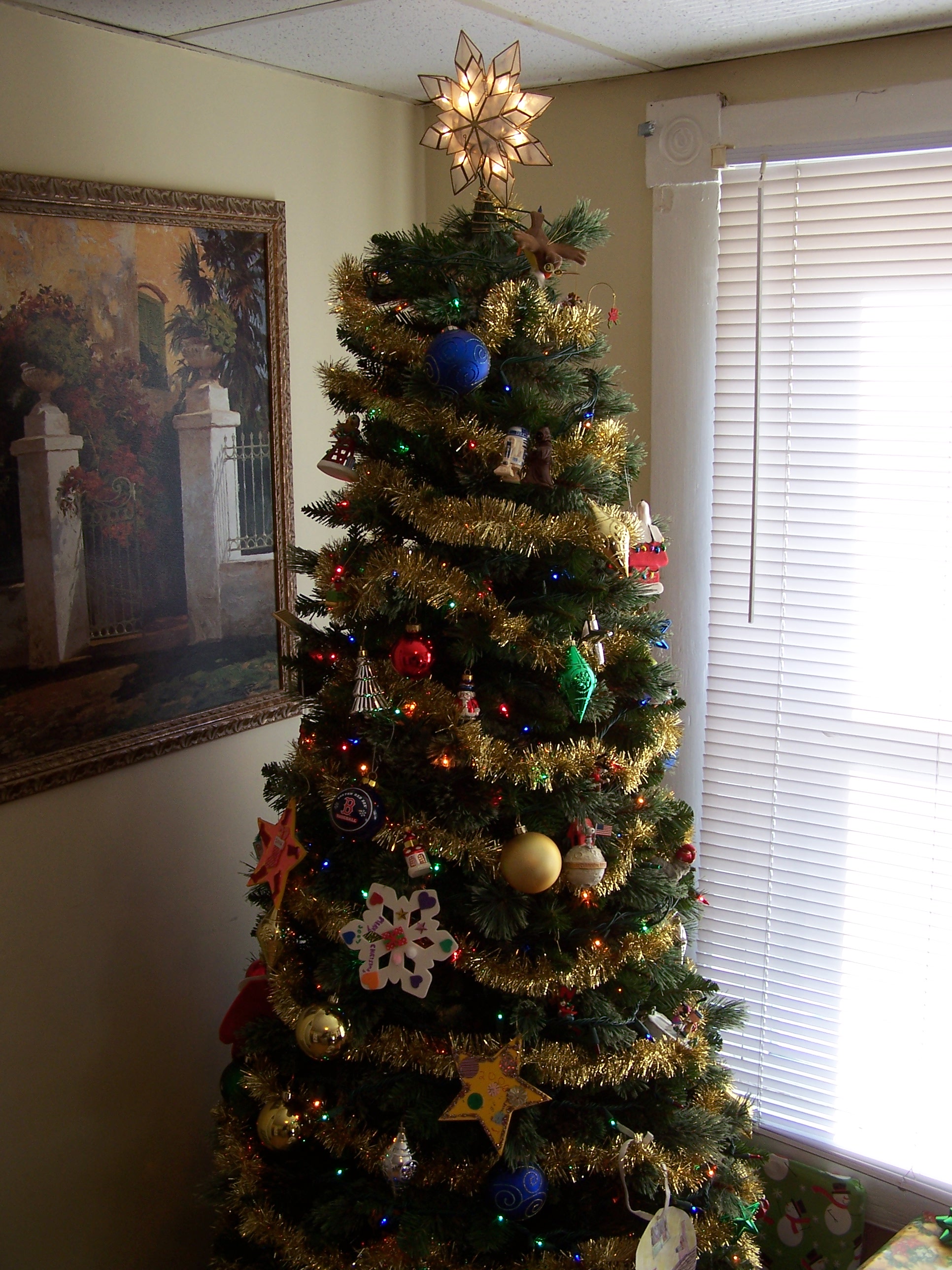 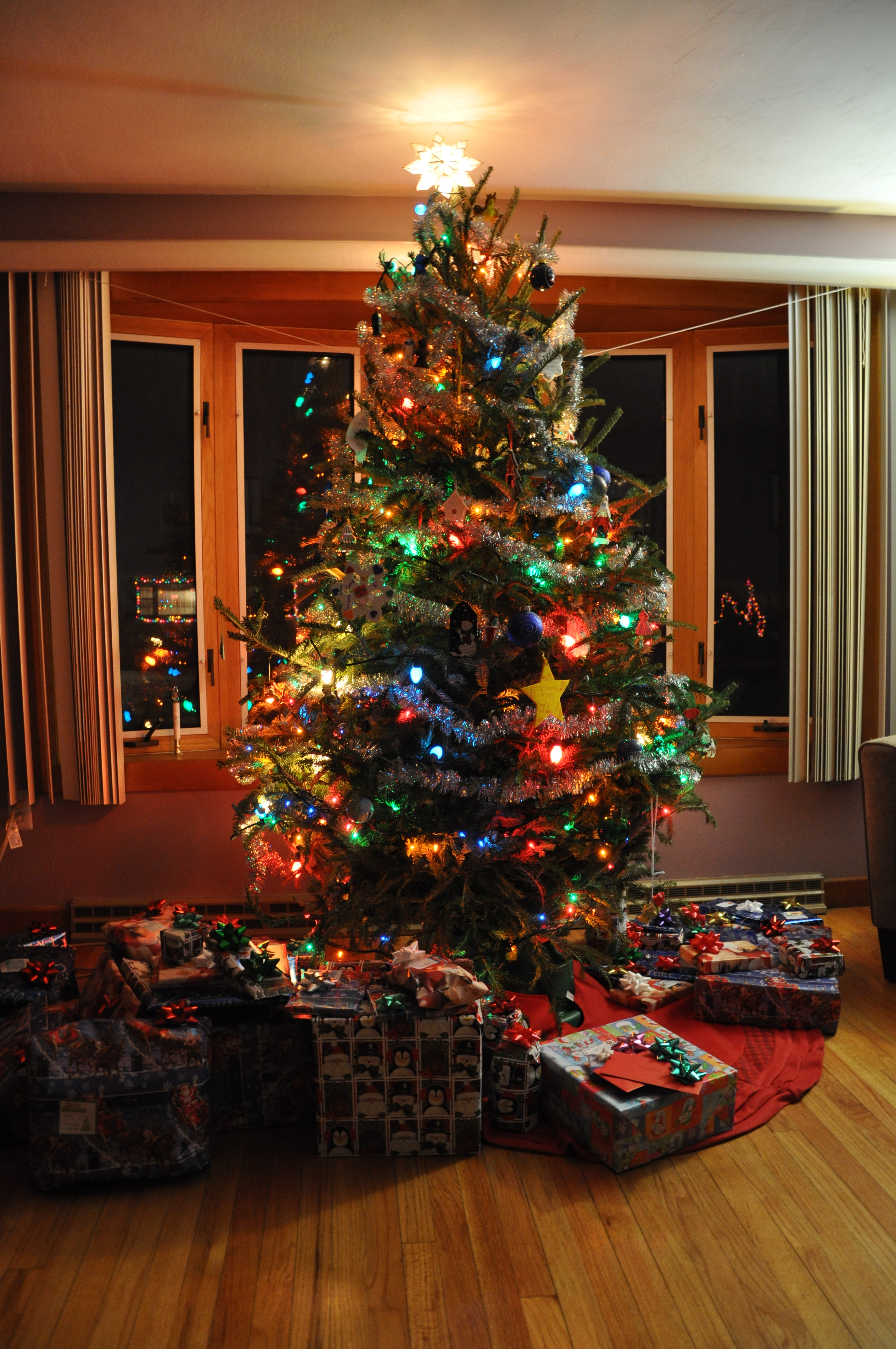 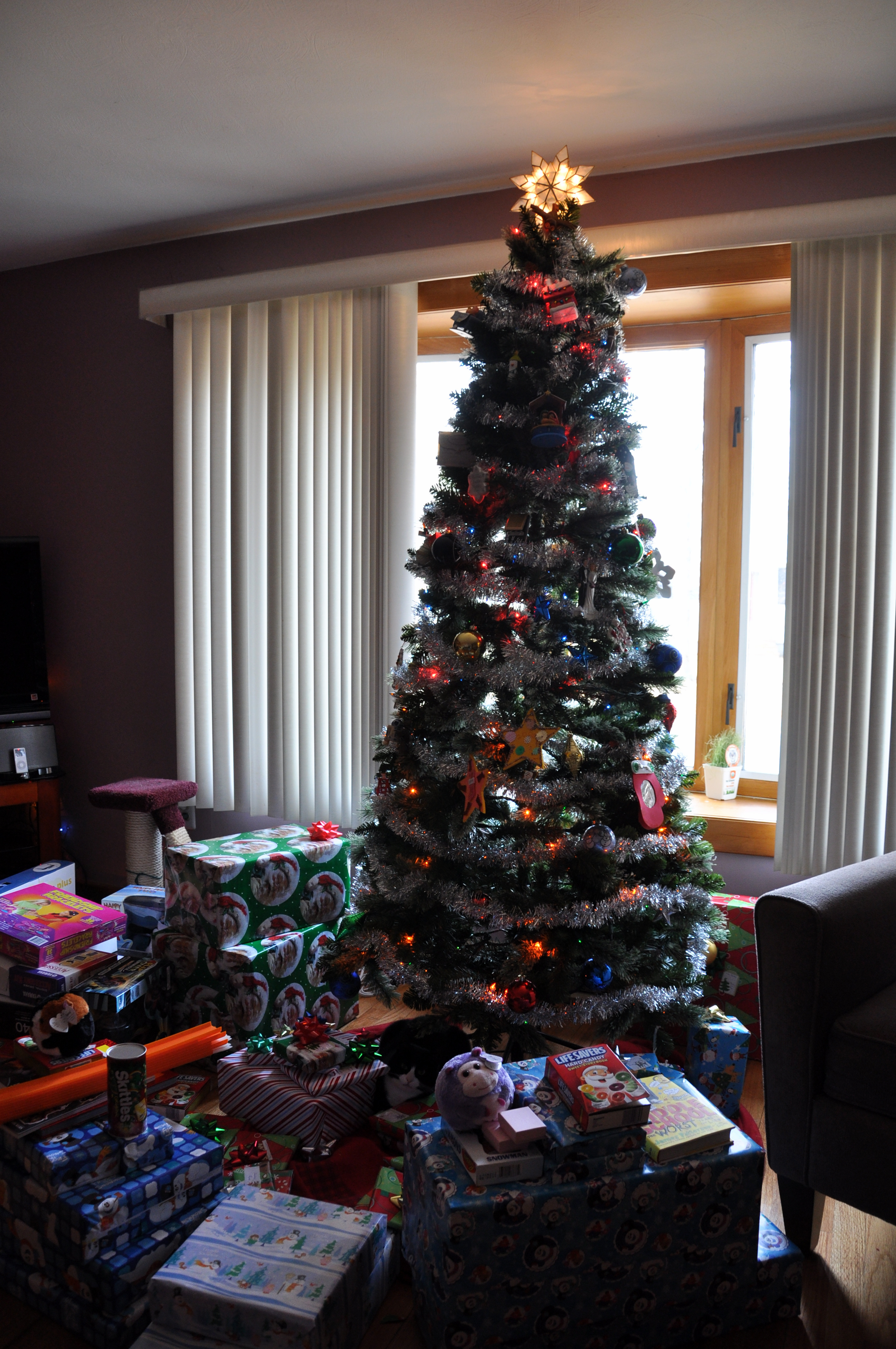 Owl has been the highest ornament on every tree since 1977. 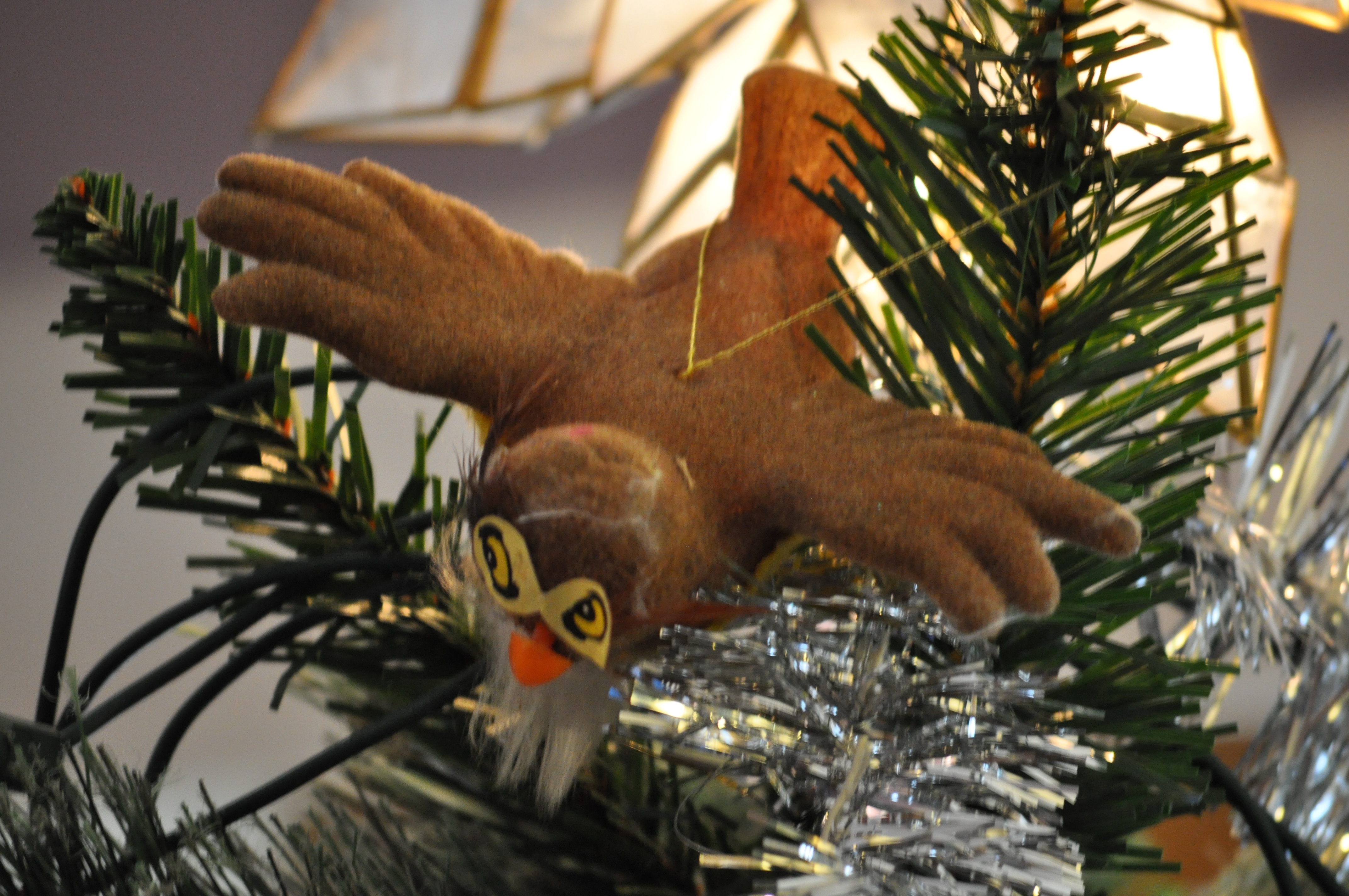 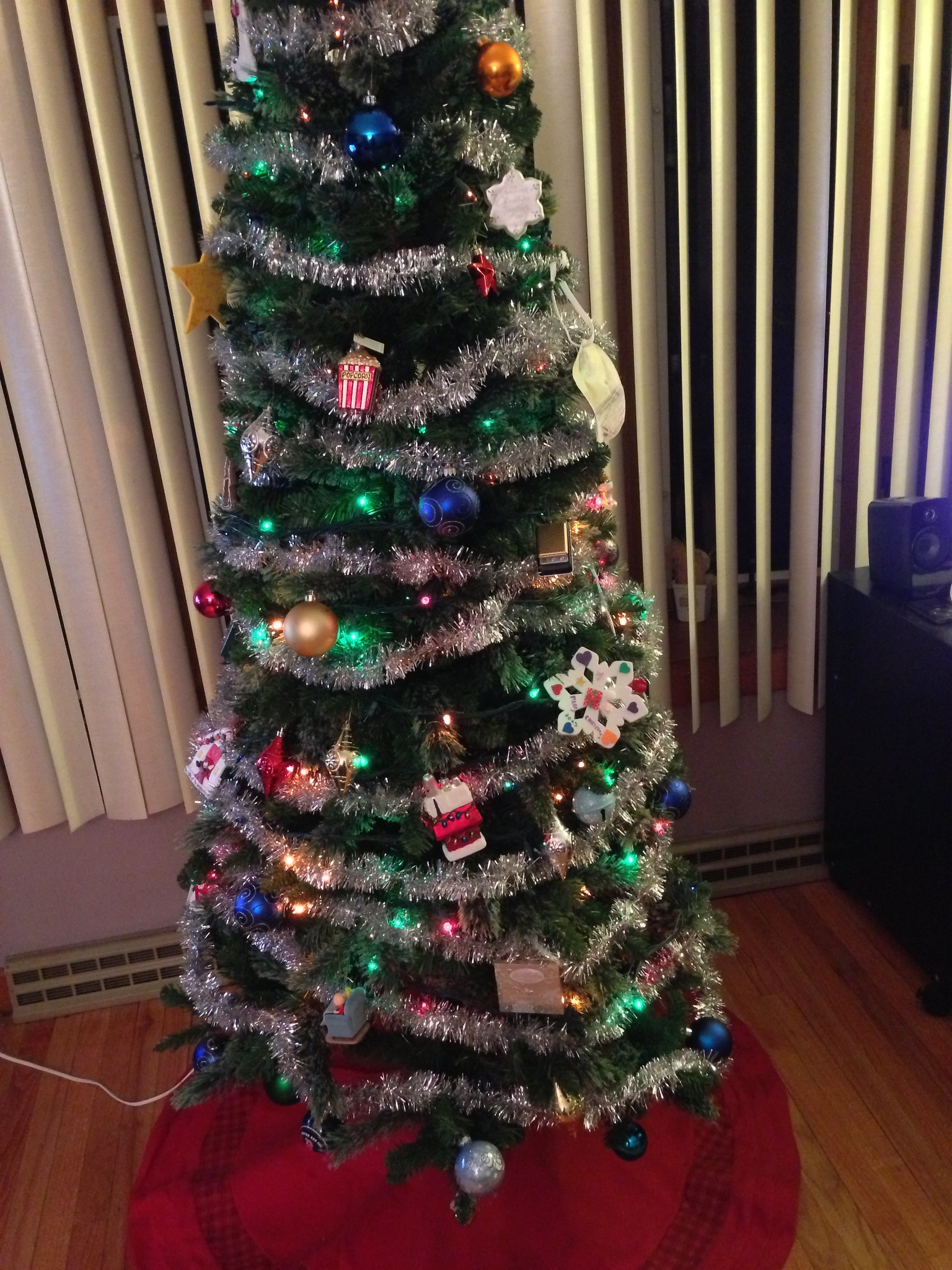 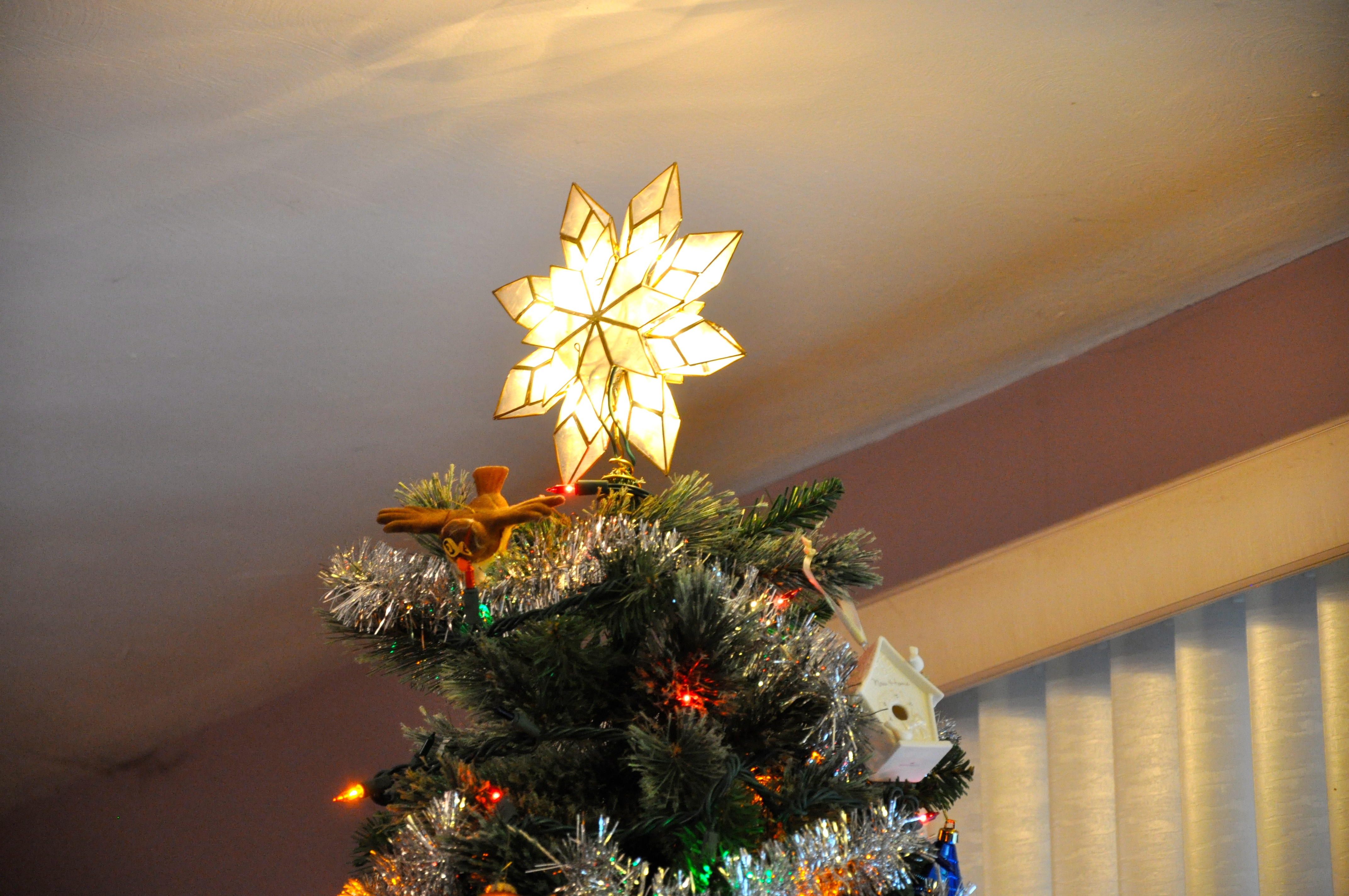 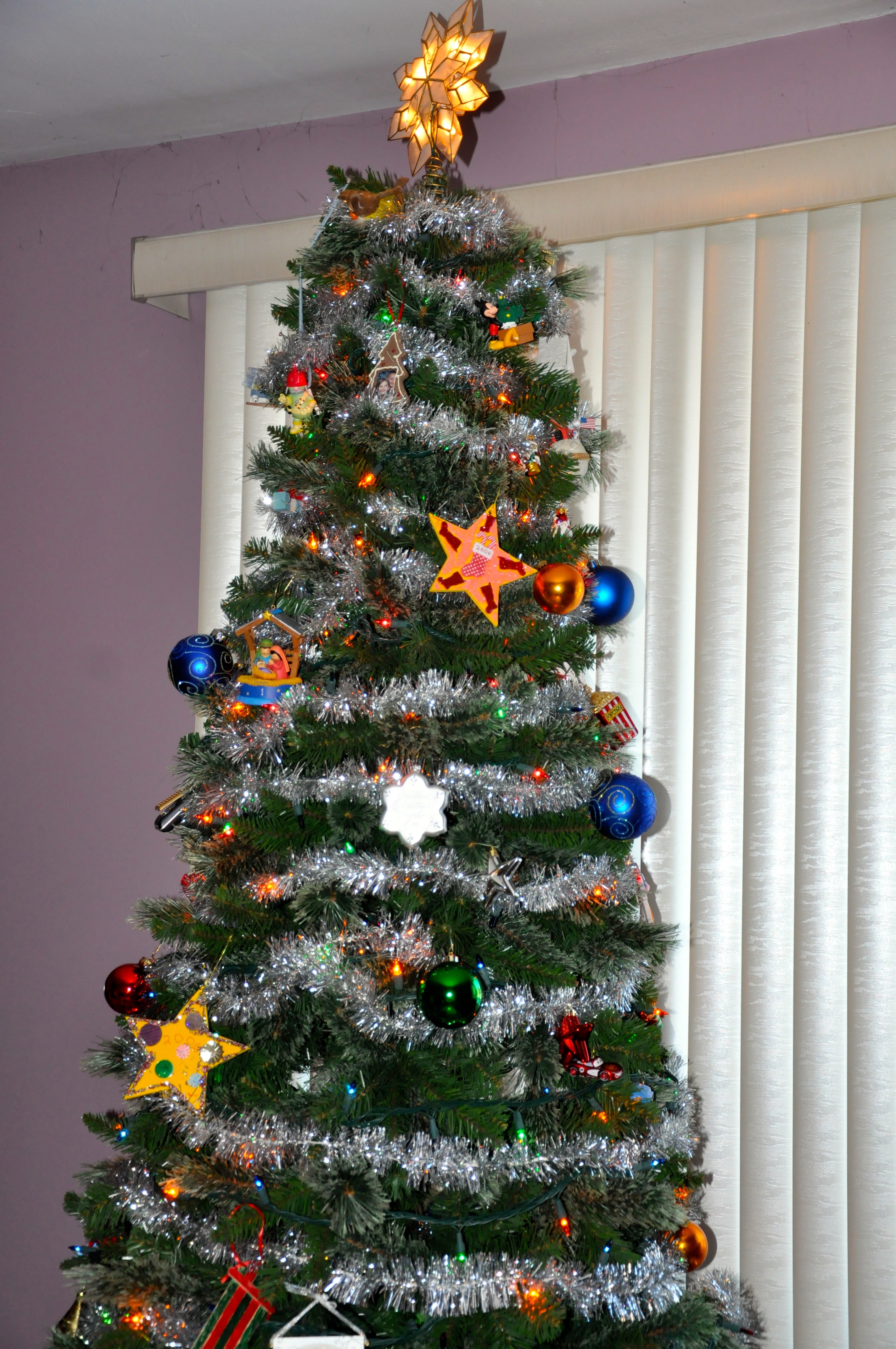 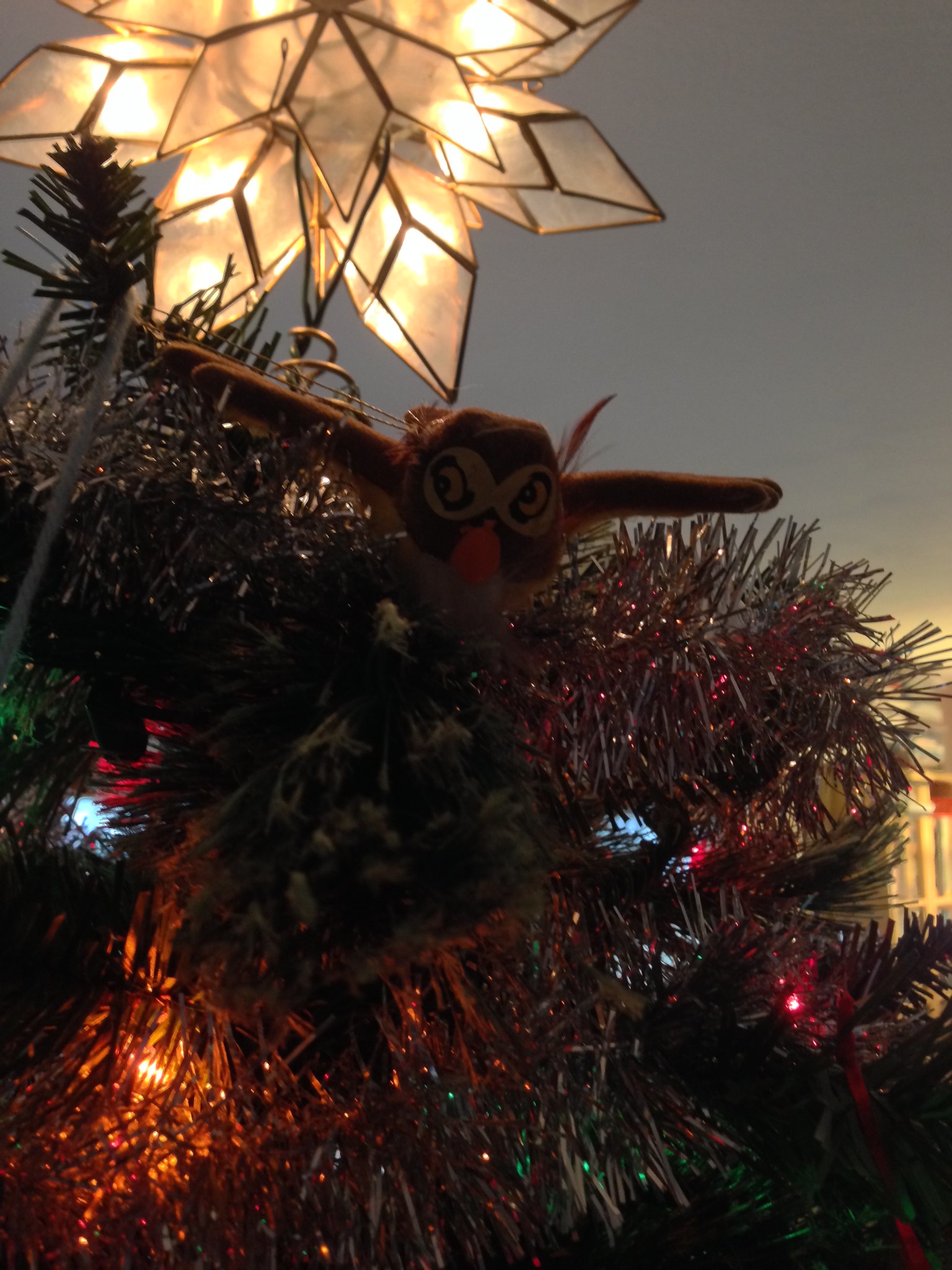 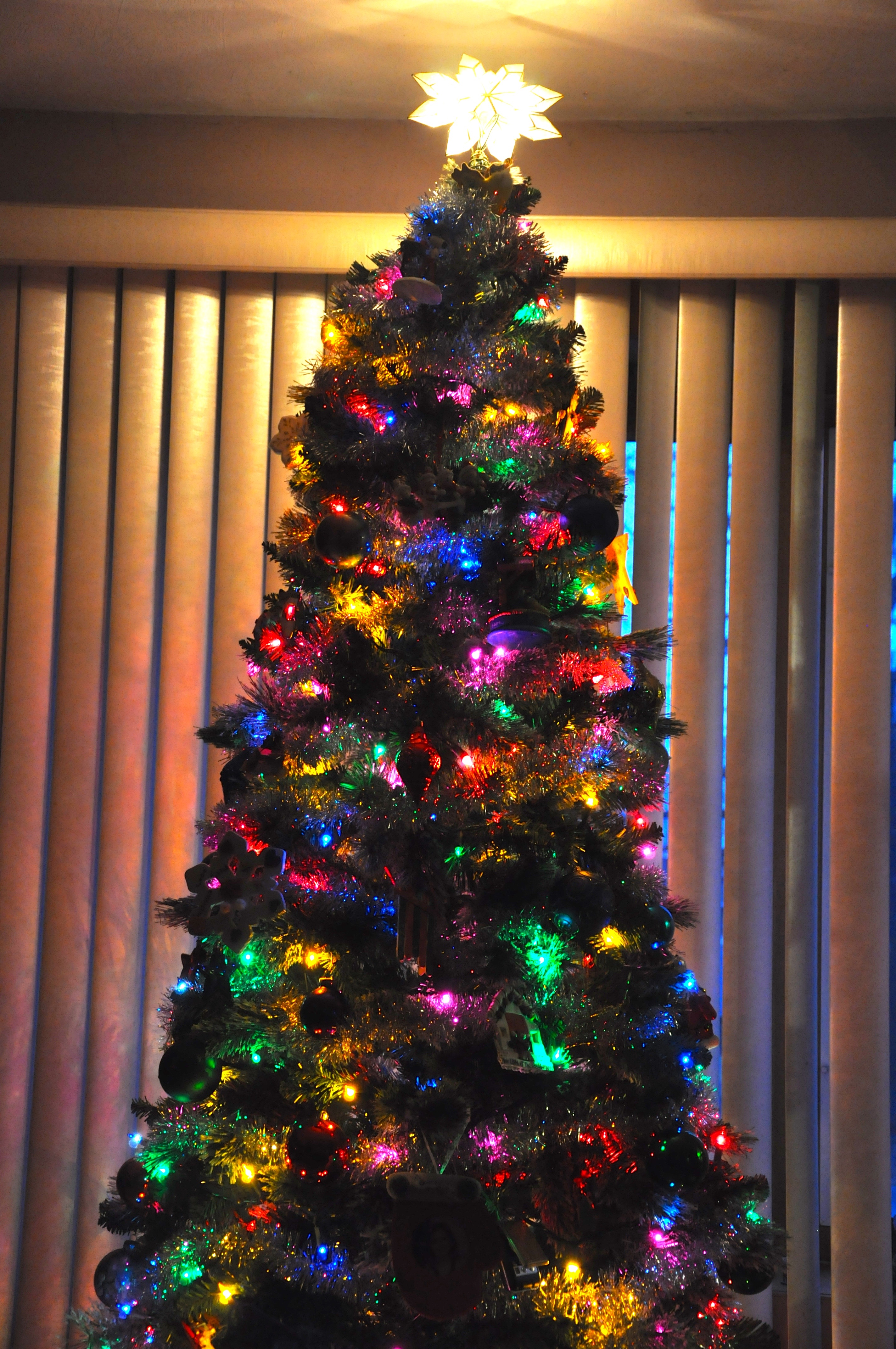 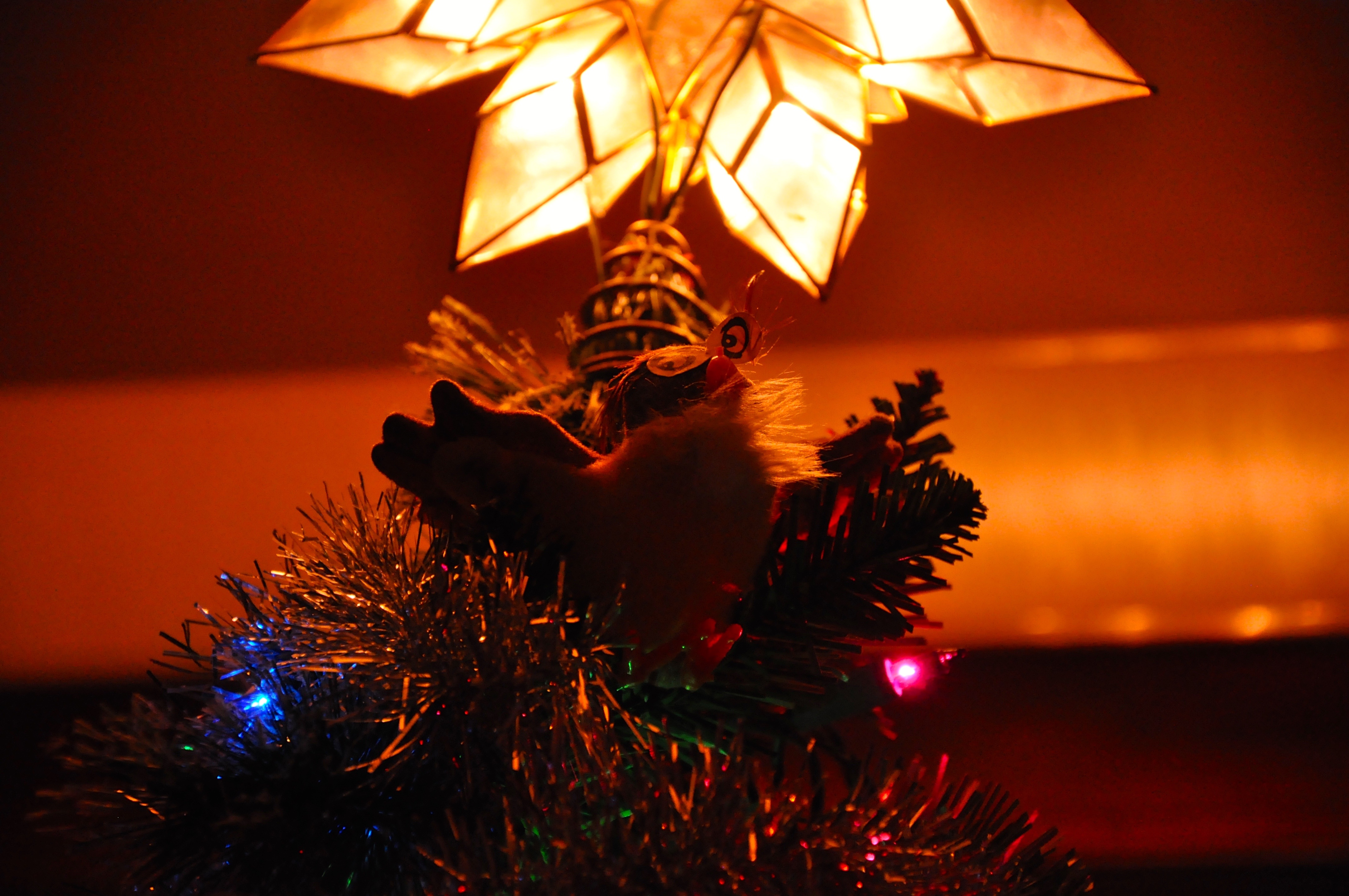 Eight years worth of trees from three houses. One for each year that my wife and I have been together. I cannot tell you how lucky I am that she and her kids have let me be a part of their family. No one is more blessed than I.