The job is done! We have a little shed-like contraption to store our trash barrels in. Well… two of our trash barrels at least. I was hoping this would be a tad bigger than it is, but it’s perfect for the two barrels we actually use.

I’m going to set the over/under for how long it takes the squirrels to gnaw their way into it at 12 hours.

Side yard: Done, from the street all the way back to the woods.

Health check: OUCH! My back hurts, my leg hurts, my arms hurt, my shoulders hurt. Yup, it’s lawn day. I’m taking a break for a few. Usually my lawn breaks are on the patio in the back yard, but everything out there is soaking wet and the sun hasn’t had any luck drying it off, so I am inside.

Okay, break time is over. Get back out there and cut some more grass, fat boy! You can do it! Through all of this mowing the lawn your Apple Watch activity app has given you credit for 16 minutes of exercise! Go cut that grass and close that ring!

The entire back of the house is done. My back needs a minute, then it’s on to the front.

It is freakin’ gorgeous out today and I’m ruining it by mowing the lawn.

I’m starting the massive project known as the back yard clean up. When I finish today I will have completed about 0.1% of the total work.

There is a tree in the woods somewhere that is swaying in the breeze and creaking very loudly. Are it’s days numbered? It can do whatever it wants just as long as it stays away from my house.

The thunderstorm that tore through town today took out a bunch of trees and power lines and for the first time in the 10 years since we moved here we have an extended power outage.

So we are sitting outside in the muggy evening air and it’s kinda wonderful.

Oh, and I filled the bird feeders for the first time in a week. Just thought you should know.

We all knew it would happen eventually. Welcome to the first working-from-home-lunch-break-on-the-patio of the quarantine.

I have a conference call in 25 minutes, and I have everything I need in order to join it out here with me. Do I take the call out here or do I go back to my desk?

Probably go back to my desk.

My beloved wife ordered some groceries through instacart today.  In the spirit of social distance I like to wait 5-10 minutes after the delivery dude arrives just to make sure he’s not going to accidentally turn around and come back again.  Paranoid?  Hells yes, but who cares.

When I went out onto the steps to bring the bags in their was a little fluffy tailed rodent sitting on top of one of them.  Mammalia Sciuridae… I think… or is it Sciuridae Mammalia?  I don’t remember high school biology at all.  Whatever, it was a little bastard muthatruckin’ squirrel.  He was sitting on top of one of the grocery bags which was open at the top to expose a loaf of bread.  Squirrel bitch had his nose in a tiny little hole in the plastic bag the bread was in that he had gnawed out and he was munching on a teeny tiny morsel of bread.  I hate that little shit with every fibre of my being, but even I have to admit that it was super cool.

So that loaf of bread never came into the house and it somehow lead to a second story involving wilderness adventures.

I brought in the rest of the groceries, wiped everything down like a good quarantined doobee, washed my hands, and then went back out for the bread.  I took it into the back yard and threw it all over the place.  If the prick squirrel wants it, the prick squirrel and all his prick squirrel buddies can have it.  I took a picture because I am the undisputed king of all things nerd. So there I was, out in the back yard admiring the view while the temperature slowly ticked it’s way up toward 60 degrees of Spring bliss.  As is often the case these days my eyes wandered over to the “tree incident”.  Last summer while we were in Florida a tree had tried to fall down but it hit a second tree.  The trunk of the second tree split dramatically, but managed to stay up.  Now the first tree is leaning against the second tree.  Someday they are going to come down.  Let’s just hope they both fall in the same direction and that our yard is in the other direction.

The underbrush hasn’t started growing in yet.  The weather was beautiful.  I could actually see a roundabout path to the “tree incident”.  Yeah, I’m going exploring.  I’ve wanted to do it with my camera but I just said screw it and went with just my iPhone.  Before we got there I had to look at this and ask what the hell is this? And now we get to the tree itself.  I can’t really see this from the yard, but I could see enough to know it probably wasn’t as simple as tree A falling on tree B.  The fact of the matter is, tree A didn’t just fall, it snapped off about 6-7 feet from the ground.  It then hit the second tree and snapped again, with the lower half dropping to the ground and the upper half (I say half, but it’s really more like the upper 80%) dropped straight down so that it was standing up on the ground and then it fell over into tree B.  It looks pretty chaotic and it makes me kinda wish I had seen it happen. 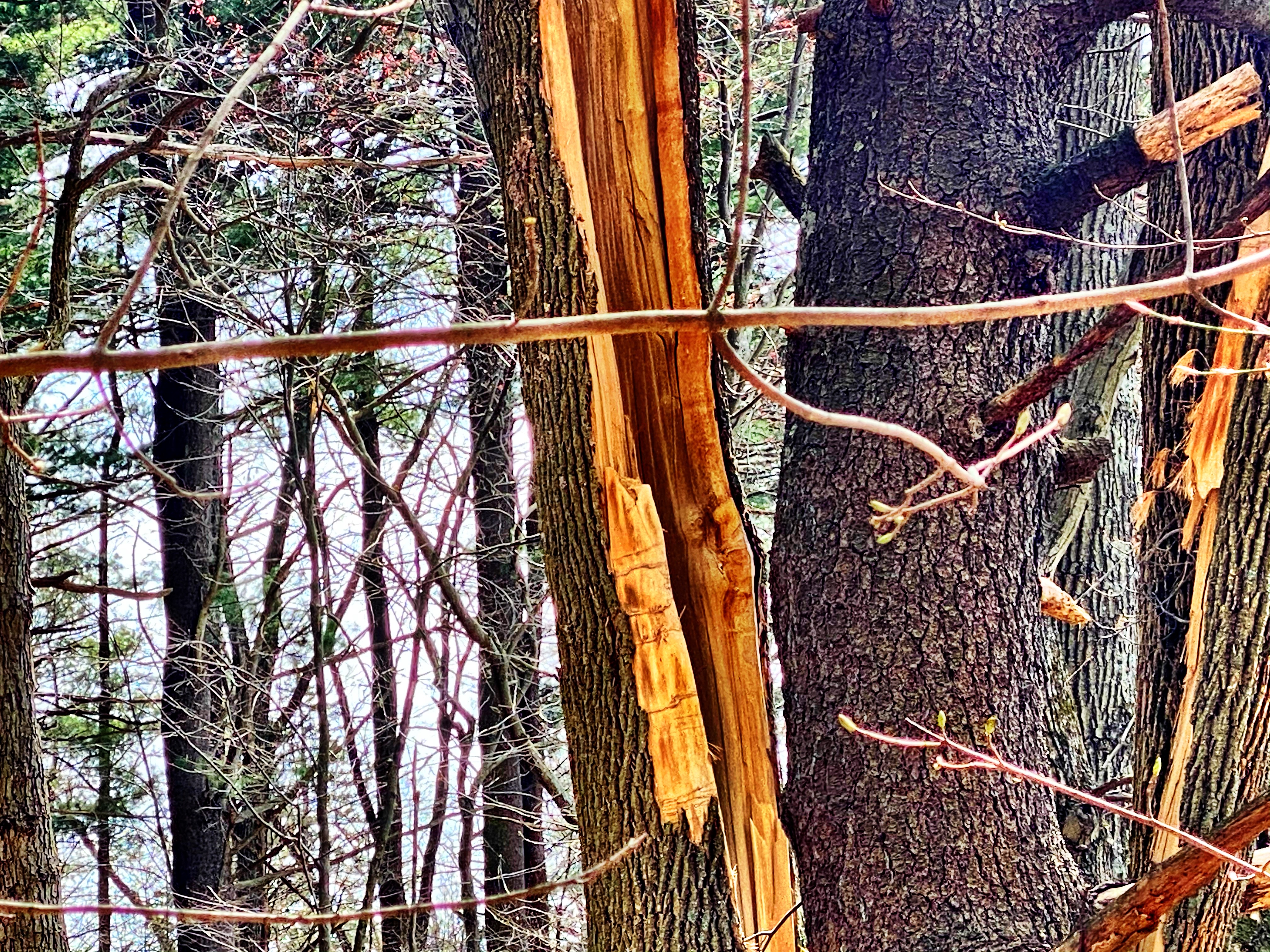 Then there was the water.  I knew there was a small body of water somewhere behind the neighbor’s house.  I thought it was further away, but it was just beyond the first hill, and the “tree incident” sits on top of that first hill. The question is, is this a pond?  Is it a lake?  Is it an ocean?  Is it just a puddle?  I’m guessing it’s just a big puddle.  I can’t see how far away this body of water goes.  That’s a woodland adventure for another day though.

And now at long last we come to the actual point of the story.

It’s Spring.  It’s the woods.  It is well known that there are ticks living out in them thar trees.  Deer ticks.  Lyme disease carrying little arachnid asshole ticks.  Every once in a while we’ll find one crawling on us after we went out in the yard.  It happens.  Once I found one buried in my gut.  I had to take a lot of antibiotics that day, let me tell you.

So ticks were on my mind, but I didn’t see anything when I got back to the house.  It is tough to look at your own ass though so who knows.  I got into the house, said hello to everyone, went to the office to check out the pictures on my phone and… about two minutes later… found a friggin’ deer tick crawling on my leg.  I grabbed it in a tissue, flushed it’s murderous, diseased ass down the toilet, and jumped in the shower.  My clothes are in the washing machine.

The moral of the story is thus:  Squirrels suck and ticks suck too.

The clipping has been potted. Now it just needs to not die.
ITS ALIVE!!!!!
Nothing makes me feel like a disgusting nazi quite like trips to the vet.