I took the trash out this morning. When I opened the door I scared the shit out of two birds who were sitting on the steps.

I walked down the steps and across the driveway to get to the barrels and I scared the shit out of a rabbit that was hiding between the cars.

I didn’t see any squirrels when I got to the barrels but I flipped them off in general, purely out of spite.

Back inside, I changed the cat’s litter box. When I took that bag out to the trash I scared the shit out of a chipmunk that was sitting on the step.

I dropped the bag full of discarded litter box contents into the trash barrel. The same barrel that the squirrels gnawed their way into so they can eat everything.

As I was putting my shoes on this morning I gazed out the window without really paying attention to what I was looking at.

Of all the wild kingdom critters we get out back, deer are still my favorite. As he (it was probably a she, but I still write he because it has one fewer letter… I’m just efficient that way) moved behind a tree and temporarily out of sight, I looked around for more deer. There weren’t any that I can see, which probably means there were 100 of them because those suckers know how to camouflage themselves like you wouldn’t believe.

So left with one deer in sight I did what any normal American would do on the day before Christmas Eve, I looked closely to see if this deer had a glowing red nose.

Now I know he’s not a reindeer. I’m not an idiot, you know, but given that all of the reindeer in the Rankin and Bass Christmas specials look just like your garden variety white tailed deer that you can see in just about any state in the Union, I thought that maybe it was a reindeer just trying to blend in with the locals. As I stated before, they can camouflage the shit out of themselves.

Nope. No glowing red nose. He even looked directly at the house at one point. If his nose was red, there is no way I would have missed it. Still, I started singing a little tune on the assumption that our back yard woods deer was one of Santa’s reindeer in disguise.

You know Dasher and… none of the others, cause he’s the only one out there….

The song kinda ran out of gas at that point. I decided to leave off the introduction part and just start with the melody that most people know.

That deer that’s in the woods there
Nosing around the leaves.
He is the only one out there.
are the others on sick leave?

All of the other deer there
Decided not to show their face.
They just left this one deer
to wander all around the place.

Then one foggy Christmas Eve Eve
Santa came to say.
I am kinda screwed you know
Where did all those other deer go.

But all the other deer loved him
Even though they decided to flee.
Those human things are crazy
Let them eat him not me.

That was fun, wasn’t it? As our one deer visiter friend left the area behind our house so that we couldn’t see him anymore, I realized something troubling…

I have that damn Christmas song stuck in my head.

Look who we found in the backyard this morning, picking through the leftover birdseed spillage.

Is this the asshole who took down the bird feeders and ruined the fun for everyone? He definitely has a guilty look about him. 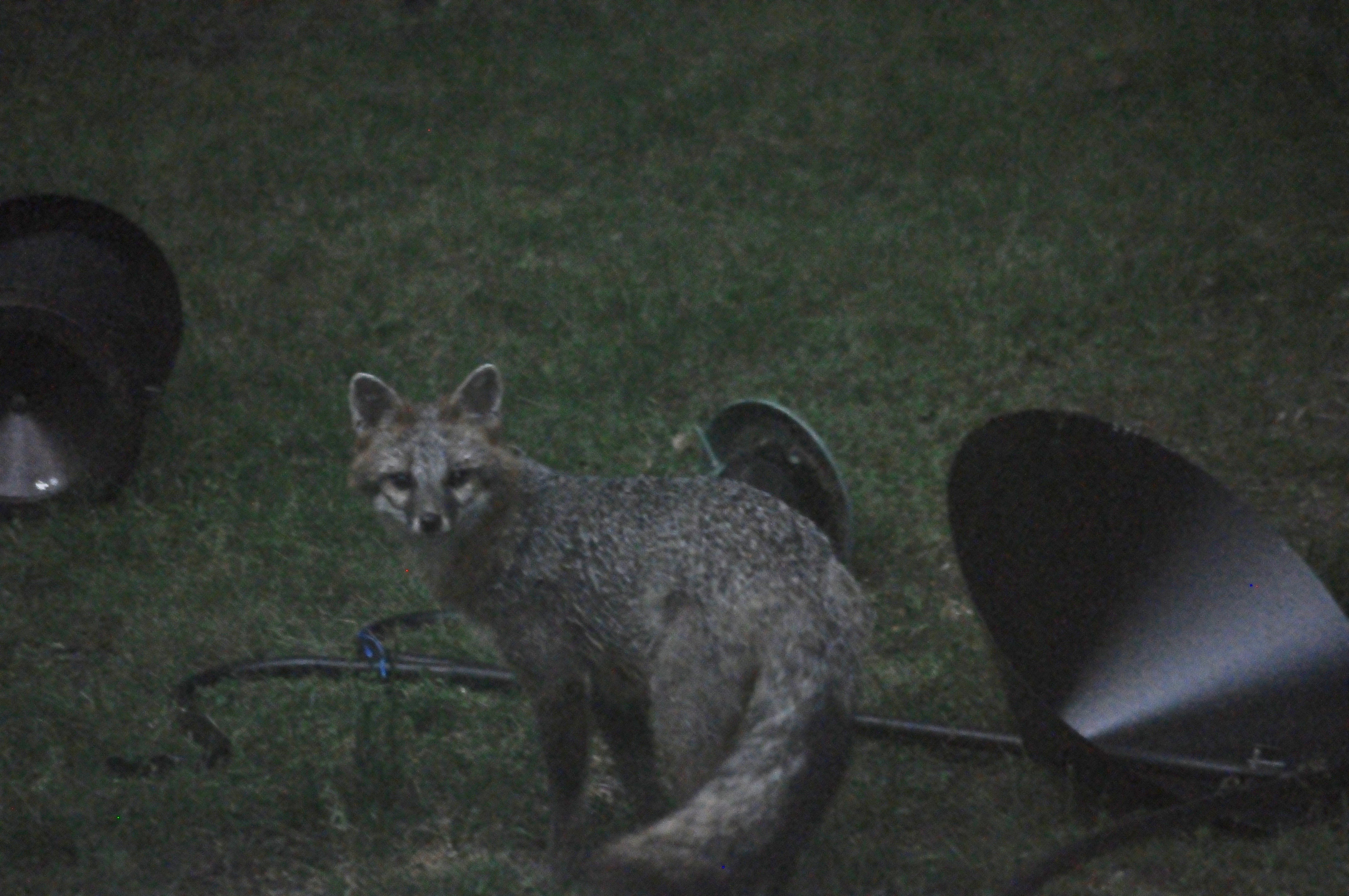 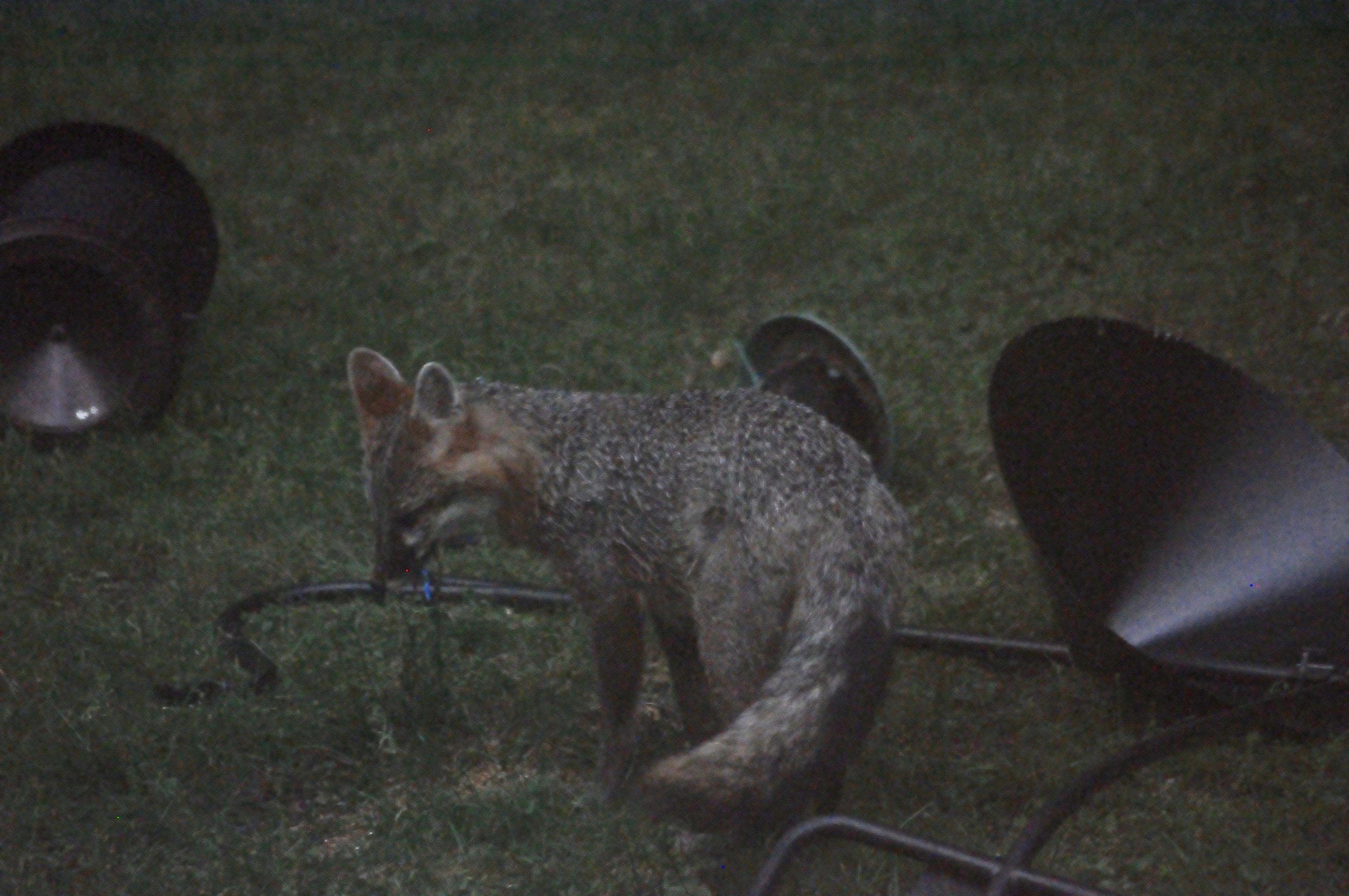 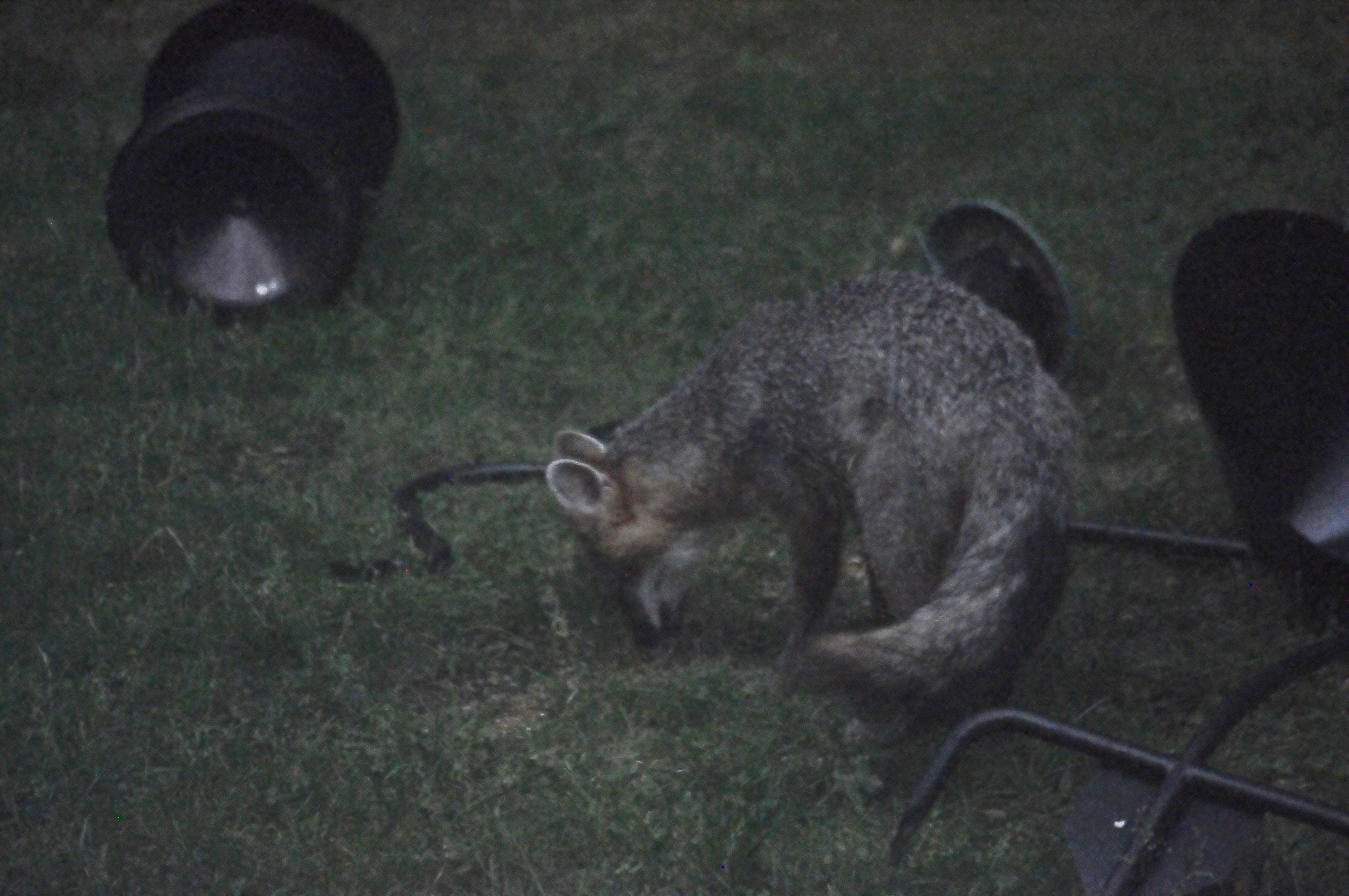 Look at that cocky asshole, sticking his tongue out at me! 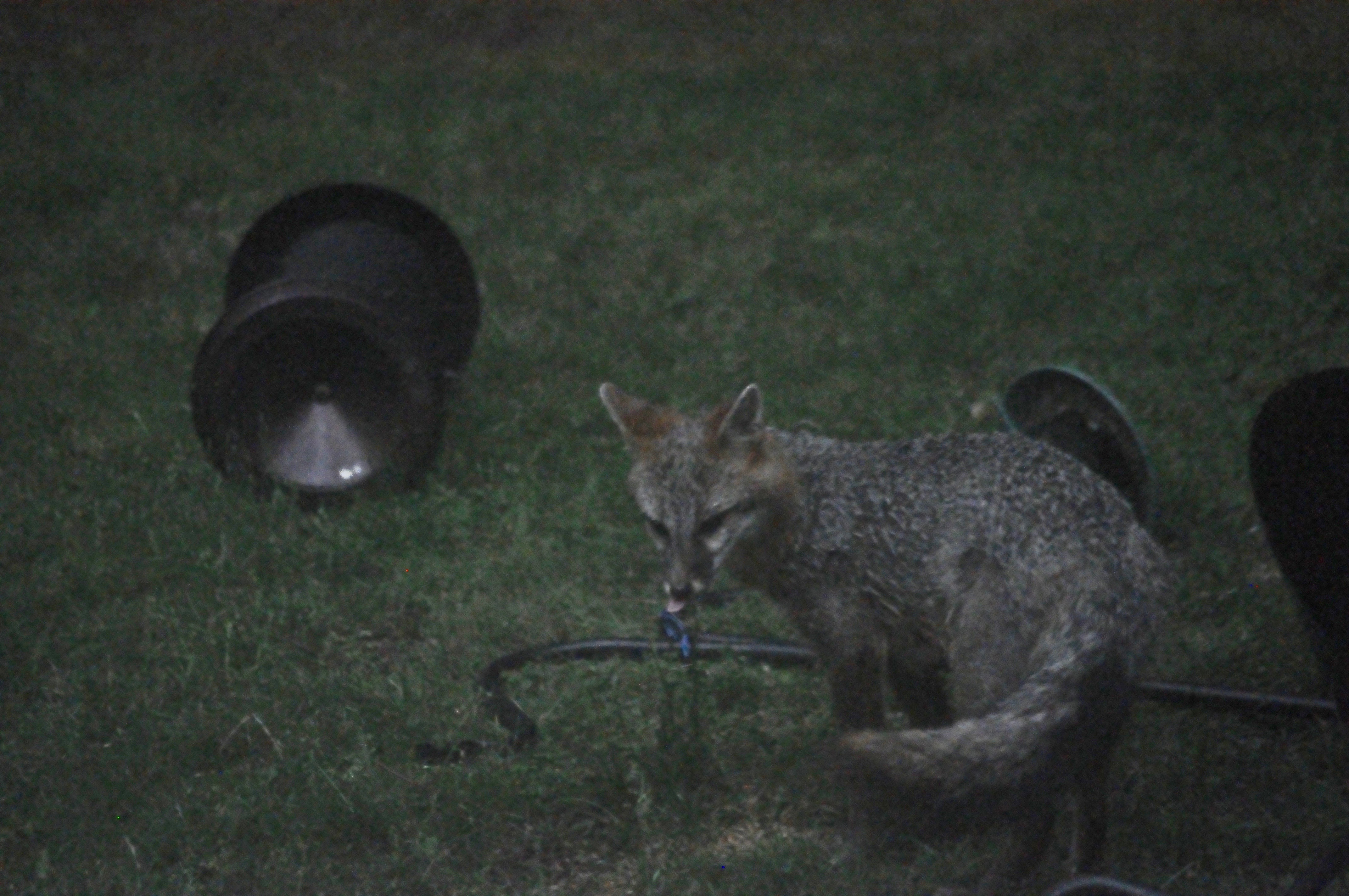 I took these pictures through the bedroom window. When I tried opening the window to get a better shot he ran into the woods. The jerk.

At last, I have a picture of the new rodent living in our back yard. I’m not sure what kind of rodent it is. I thought either a groundhog or a gopher. I put two pictures on Flickr a few minutes ago and so far we have one vote for groundhog. Does the WordPress.com community agree? 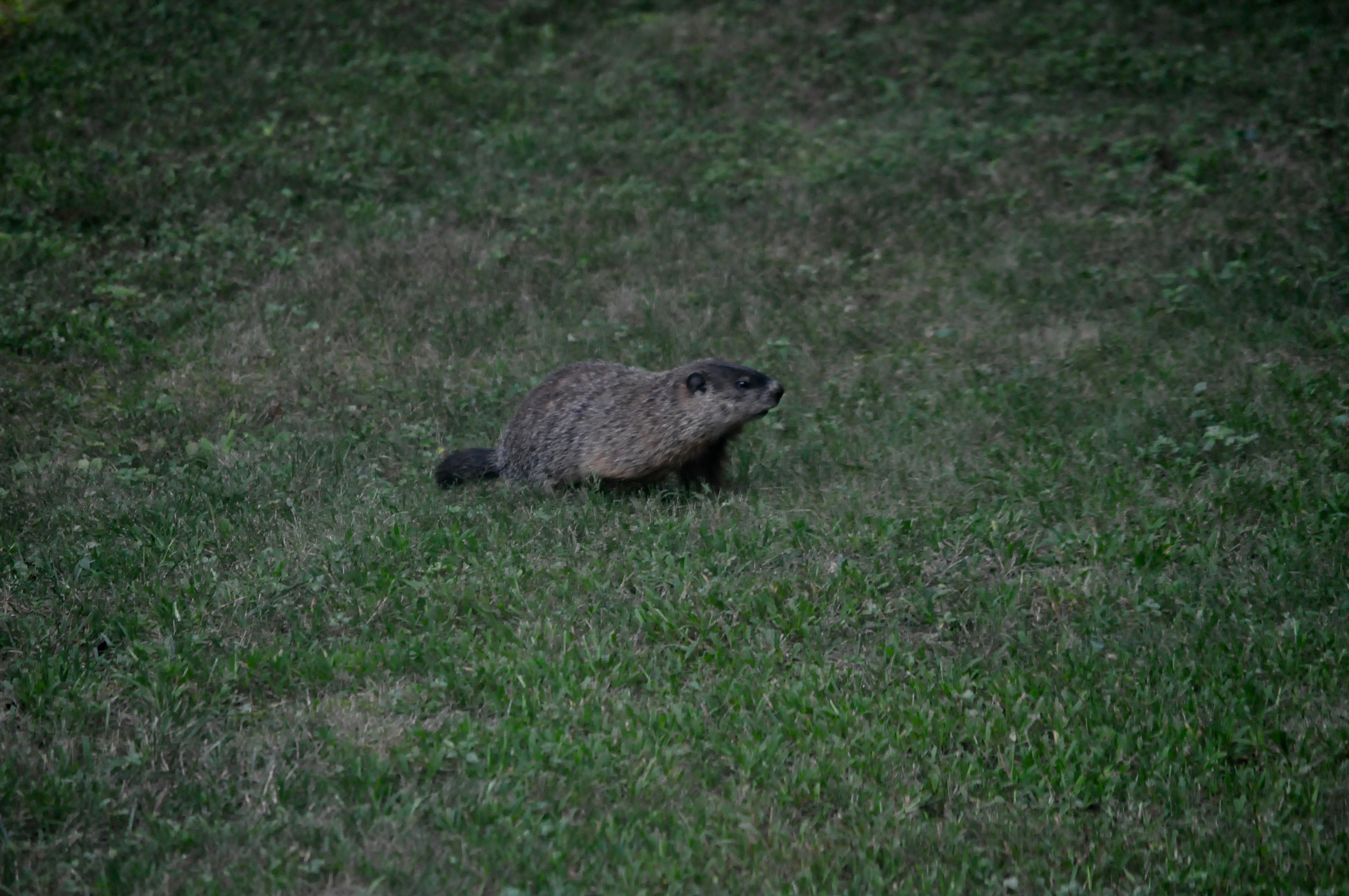 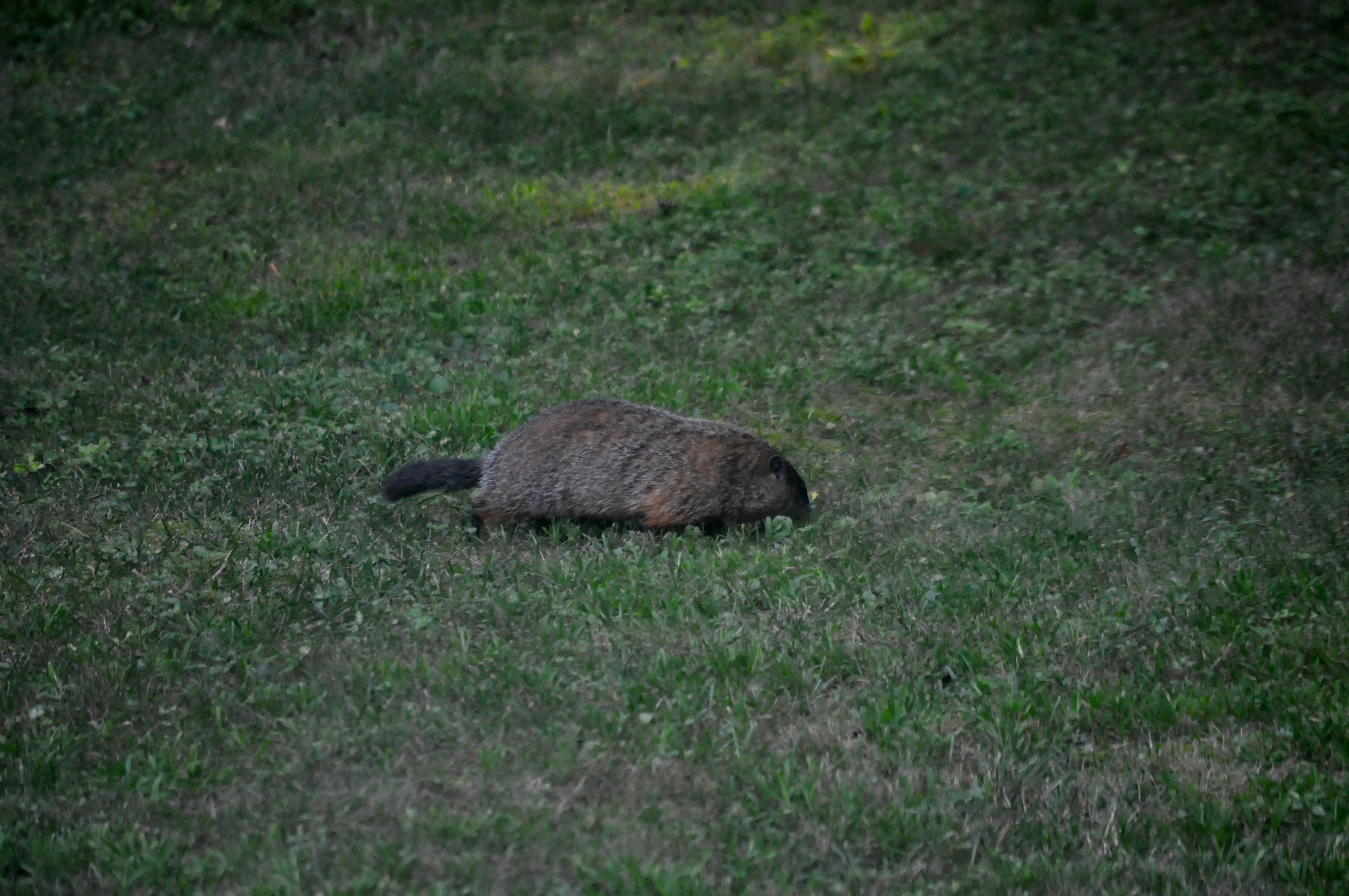 So what do you think this little critter is?

Once again, only a single deer this morning. I didn’t really have time to look too terribly hard, but there was definitely only one doe out there wandering around.

Where are the others? Where is the rest of the herd? Is herd even the proper word to use for a group of deer?

I promise you that there is a deer in this picture. Can you see her?

I saw a hawk in the backyard. I was looking out the window (I should have looked at your face instead… sorry… Rush lyrics just took over my brain for a second… I’m okay now) and woosh it flew out of the woods onto a tree on the edge of our yard. It seemed a little small. I wonder if it was the bird equivalent of a teenager? Anyway. I also saw a squirrel in the backyard. I was hoping… hoping… hoping… to see that hawk act out a little bird revenge on the bastard who keeps stealing all of the seed out of the feeders.

But alas, no. The hawk was a lazy asshole and the squirrel lives to steal bird seed another day.

Was that a bobcat I just saw in the woods? I thought maybe it might have been a fox, but it didn’t seem to have that much of a tail. I honestly don’t know what the hell it was.

Here kitty kitty (he said before running for his fat life)

I am working from home today. When lunch time came I decided I’d cook the last hamburger out on the grill. A little cookout for one, if you will.

In one hand I had a plate with the burger on it along with a couple of grill utensils. In the other I had a little tray table I use to place all my stuff on while I grill like a grilling demon wannabe.

I put the tray table down while I opened the garage’s back door. Immediately upon opening the door a dragon fly blew past. Good! I’ve been hoping to see those little buggers. Dragon flies eat mosquitoes and we sure could handle a drastic reduction in the back yard mosquito population. Welcome back, dragon fly!

As I took my first step toward the open door I saw something even better. Probably only 20-30 yards away, flying slowly, almost casually, across the far end of the yard was a great big honkin’ red tail hawk. Right there, as large as life (literally). It landed on a low branch of a tree near the edge of the woods. It sat there for a second, just long enough for me to get a good look and for him to notice there was a great big two legged sucker walking out of the building. It took off into the woods and I quickly lost sight of it.

As I grilled up my lunch, I kept an eye on the trees and on the sky. I saw a big butterfly, and a bluejay, but that was it. I told myself that if the hawk came back into the yard I was going to give it my burger.

Maybe if I feed it, it will start killing off the damn squirrels that eat all of my bird food.