We had our first band practice in a little over a month last night and all sorts of things were new. I played a new guitar through a new amp, and three of us sang through a new powered PA speaker with our mics plugged through my Mackie mixing board that I bought in 2006 (2005?) to use with my ADAT 8-track but has been sitting unused at Mike the Bass Players house for about two years. The vocals were loud and clear. We need to get a second PA speaker so that we can have a good spread, but once we get that we will be more or less ready to play bars that are not called Racks. Next week I will bring my little Alesis Nanoverb to add some sauce onto the vox, and I have an old 3630 compressor that I might put between the board and the speaker to just level off the peaks.

My new amp is ridiculously loud. I set it as quiet as it could get and still actually produce sound, and then I used my overdrive and fuzz pedals to push up the volume. Kevin the Drummer said that I probably could have gone a touch louder, but with that amp I’m nervous that if I touch the volume knob it will blow out the windows. It sounded good. A little less low end than my Deluxe Reverb, and WAY more top end. I actually had the treble knob turned all the way down. After a song or two I was totally used to it.

The new guitar though… woah! I have played it quite a bit since my birthday, but never for long stretches of time. Yesterday I spent an hour and a half or so in the garage learning a couple of new songs and my finger tips were in pain by the end. In the month plus since the last gig I have lost my calluses pretty much completely. I was feeling it. Then I went and rehearsed for two hours. By the end I was REALLY feeling it. I’m used to playing guitars that are pushing 40 years old and never had a re-fret. The necks are smooth and the frets are worn down nicely. That’s not the case with the brand new 2018 SG. The frets are not high, but after 3+ hours they felt like they were as tall as mountains. I slid up the neck at one point and honestly felt like I ripped through my skin. I didn’t, but I was expecting blood. So it’s new, you get it… but how does it play you ask? It played and sounded like a dream. I feel like I’ve been playing this guitar for my whole life. It just feels natural. Literally the only issue I had was this one time when I tried to adjust the volume knob with my right pinky without looking and the knob itself wasn’t where I thought it would be. I had to look down to find it. That’s it. The guitar is a dream.

We played through one of the sets from the last show and then we messed around with a couple of new songs. They went okay. Better than I expected, actually. We tossed around some ideas for more new songs as well. I have a story for one…

The other day, Larry and I were emailing about something and he mentioned how the California Raisins covered “Heard it Through the Grapevine.” I thought it would be tremendously witty to say something like, yeah that old Creedence Clearwater Revival song. Get it? The Raisins covered it, and so did Creedence, and that’s frightfully witty, right? Okay, so I suck at humor. Anyway, since that moment I have had a string of Creedence songs spinning through my head. I don’t even particularly like Creedence, but there I was humming song after song after song. I threw out “Born on a Bayou” as a possibility… crickets. I threw out “Traveling Band” and that got a response from Mike, but that’s it. He threw out “Fortunate Son,” which Break Even used to do and I was okay with it, but that’s it. I then told the Grapevine story to explain where this was coming from and Greg the Singer said that Grapevine was the only Creedence song he’d want to do… I start singing it in my head… then I started playing along with singing it in my head… then Kevin started playing along… then Greg started singing along. We got to the first chorus before it collapsed, but let’s just say it’s on the to do list for next practice. If we’re not careful we’re going to morph into a soul band. 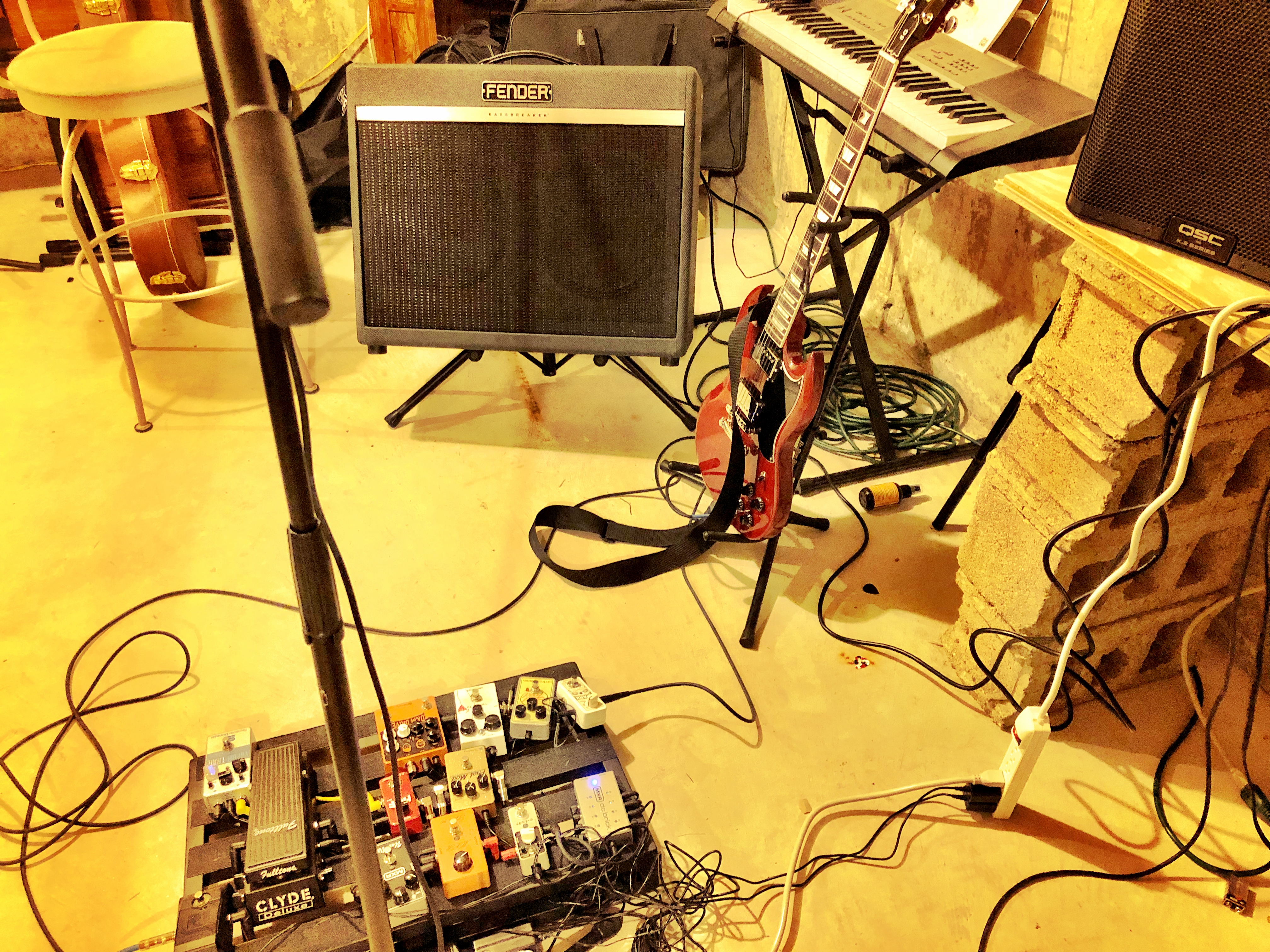 We are making a mess out of Mike’s cellar. Sorry, Tammy.